“The acceleration of uncertainty should not decelerate your initiative!” – Futurist Jim Carroll 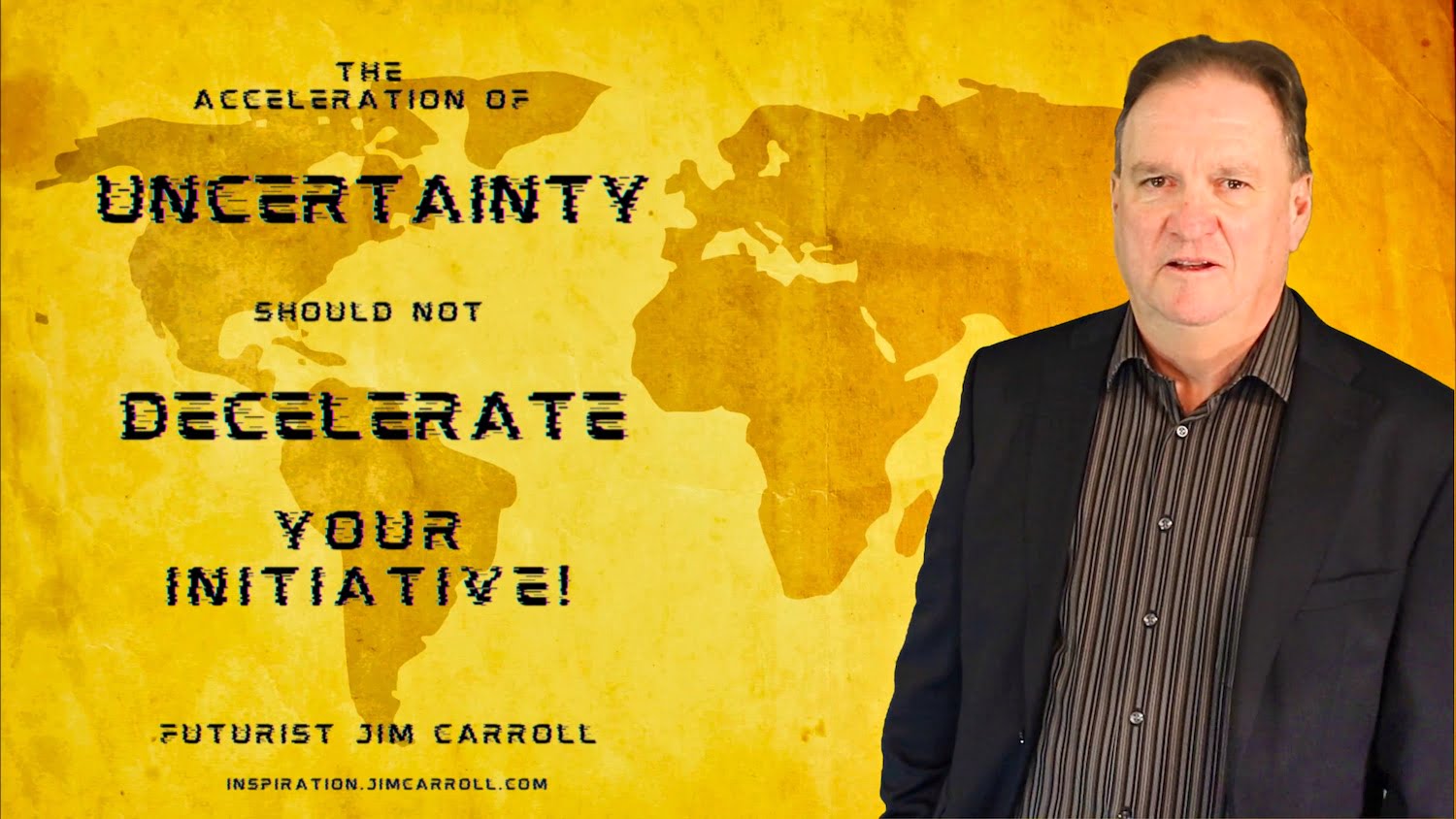 How quickly our future can change!

Just a week ago, it seems, the world was in a different place. Russia was on the doorstep of the Ukrainian border, threatening the most ill-advised, illegal invasion since World War 2 – yet many of us were in disbelief that it might actually happen. At the time, global alliances were strained and evolving as the typical reality of volatile diplomacy was trying to determine how to best manage the threat. Hope for sanity prevailed.

One week later, the ruble is in free fall, Russian oligarchs are turning on Putin, and the Ukrainian President has turned into a global beacon of hope against tyranny. The Ukrainian people? An inspiration to all as they battle fiercely to achieve their hope. And yet another dramatic result – global alliances have changed. If Putin has done anything, he has managed to align most nations in the world into a new, grand coalition that is now acting aggressively against him. This is HUGE.

We do not yet know how this situation is going to turn out, and it might yet get worse.

But one thing is certain – we are now in a bubble of uncertainty, a storm of complexity, a cloud of volatility, an arena of ambiguity.

What do you do now? At a personal or corporate level, do what you can to assist Ukraine in the short term! While all of us have limited influence, we can individually provide to those we know the beacon of hope. Reach out to anyone you know who lives in the country to offer them your support, encouragement, and thoughts for the future. I did that yesterday with a PR executive I know who lives in Kyiv; she was working with me on a trends article but two months ago. I think that perhaps, in a small way, I managed to give her but a brief moment of hope from the outside world as the shelling was underway around her.

At the same time, stay focused on the medium and long-term future – at some moment in time, this crisis too will draw to an end. That’s the key message I focused on with my clients during a similar period of uncertainty in 2002-3, again in 2008-09, and the same message holds true today. As I look back at my career, I’ve come to realize that I’ve been through many eras of uncertainty:

From a long-term perspective, all of these eras were just another blip in the grand scheme of the churning engine that is the global economy. Through the next ten years, we’ll see a few other economic challenges along the way; various regional economies and sectors will be impacted, yet innovation and growth will abound. That’s why I’ve also indicated that a key leadership mantra for the high-velocity economy is this: “volatility is the new normal.”

To innovate with uncertainty, don’t let a short-term vs long-term trend disconnect take over your strategic thinking. In times like these, “aggressive indecision” can become a driving cultural and leadership trait. Organizations that fall into this funk fall behind. Innovative companies didn’t permit that to happen then, and you shouldn’t let this happen now.

So it really comes down to this: when do you innovate? Are you going to wait until you are comfortable that we’re in a sustained period of economic recovery? That’s a bad decision — because economic volatility is the new normal. Everything we have learned from past periods of uncertainty is that the winners were those who decided that it was an important thing to keep moving ahead despite massive amounts of uncertainty.

I’ll be on stage in just under 3 hours, speaking to 400 dentists about the future of their industry and the acceleration of healthcare.

It’s great to be back after almost a two-year hiatus, interrupted briefly by two events in November – just before Omicron hit. Here’s a playlist as to why getting back to thinking about the future is so important – despite all the raging volatility in our world, you need to align to what’s next! 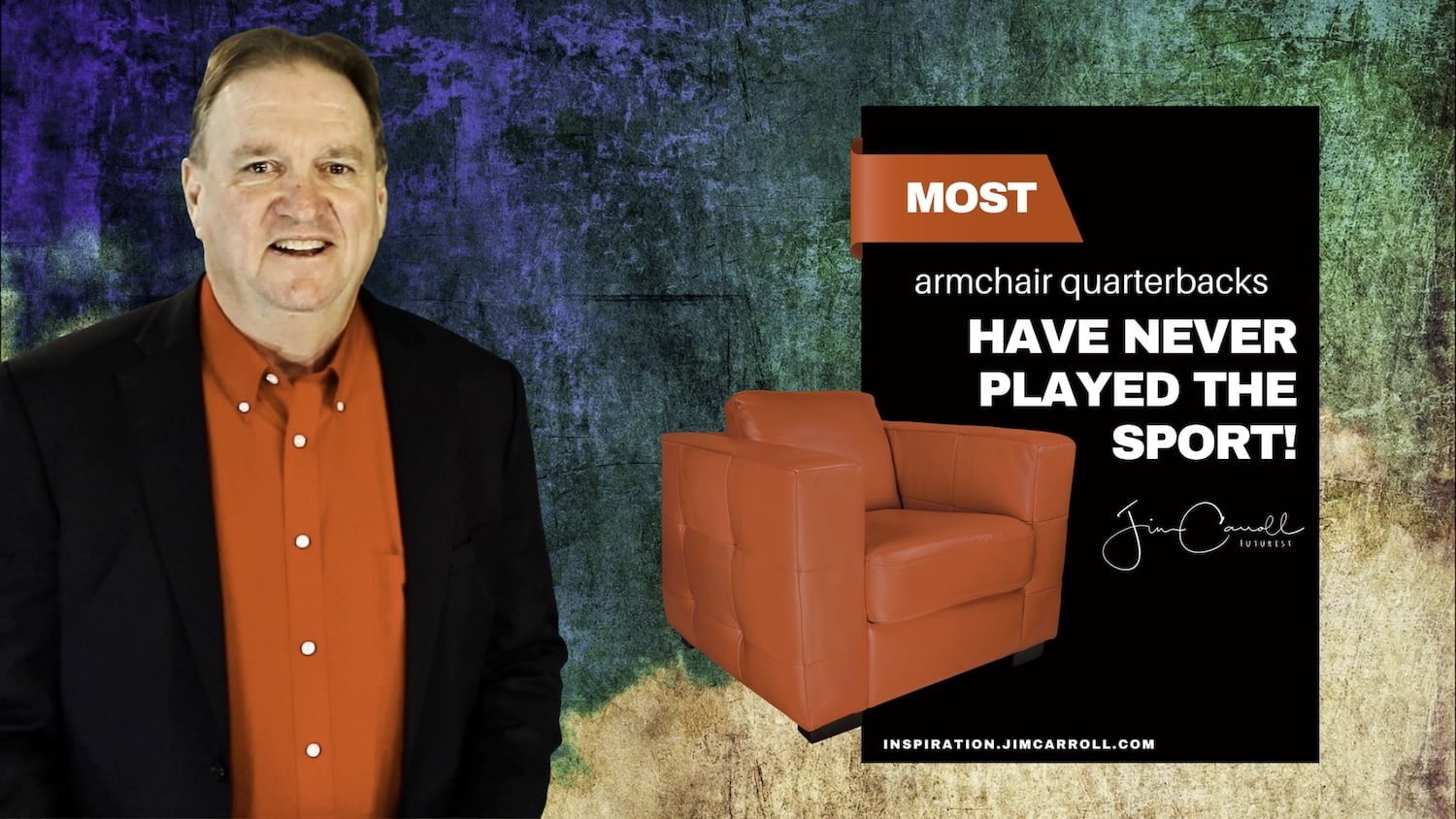 Everyone is an expert at everything and yet has expertise in nothing!  We are regularly surrounded by people who profess to have deep, instant knowledge, expressed in the buffoonery of their convictions.

Have you noticed how quickly average people have shifted from being experts on epidemiology and the science of pandemics to having deep knowledge on vaccine efficacy, followed by sudden deep insight on policing and managing complex protests, and now … they’re suddenly experts on geopolitics and the war on Ukraine!

And in that context, against stupidity, it seems we are defenseless.

This is the sad byproduct of the fact that we live in the midst of a massive knowledge explosion, both good and bad. The positive side of our future is that there are tremendous new opportunities unfolding: the volume of medical knowledge is now doubling every 78 days as a result of the pandemic – pre-pandemic, it was every 6 to 8 years. This takes us into a reality of wonderful new forms of treatment, diagnoses, pharmaceuticals, and care. That’s but one industry – a similar pace of discovery is occurring in science, energy, engineering, technology…

At the same time, we have allowed a culture of “mythinformation” to flourish its cancer among us. You already know that to be true, and there seems to be little that few of us can do to deal with this complicated reality. Our media universe has become a wasteland of ill-informed ‘opinion’; Twitter comment thread have become a toxic sludge of, in many cases, a new form of mental illness.

And yet, here’s a question you need to ponder – is that same culture floating into your corporate organization?

Is it beginning to creep into your corporate culture, accelerating and enhancing organizational sclerosis that was already holding you back? To what degree does the sudden pandemic of false knowledge expertise provide you more damage than good? For a long time, I’ve preached the religion that ‘just-in-time knowledge’ is a critical path forward – and yet, at the same time, ‘just-at-the-moment misinformation’ might be the real disease that is stalking your innovation efforts.

Cain Watters specializes in wealth management for high-end dental practices, and invited Jim in for a keynote on the future of the industry and profession; post-Covid and economic volatility innovation strategies; and the creative concepts behind what Jim calls the Masters in Business Imagination. The industry is faced with the acceleration of new methodologies, the arrival of new technologies, fast-paced science, more demanding and information-informed patients, and unique workplace skills and recruitment issues. 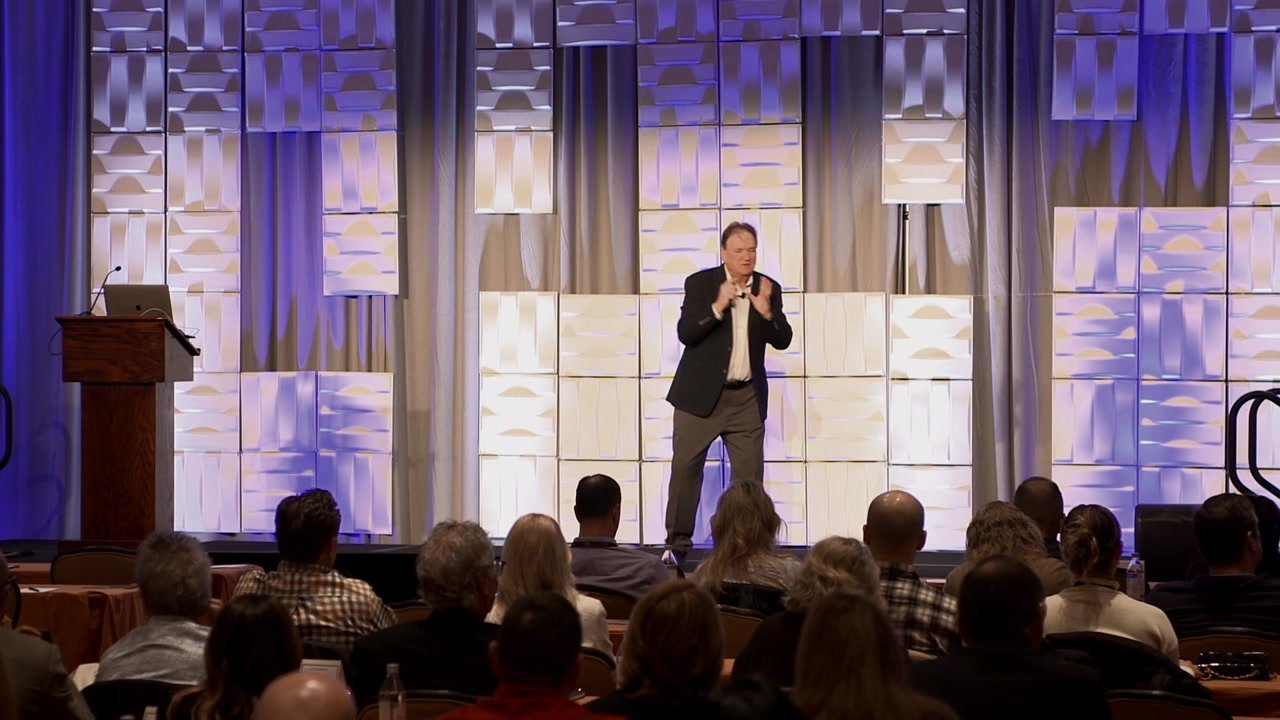 Here’s a short clip from the keynote on how to accelerate their creativity with future trends – by focusing on what I call The Masters in Business Imagination!

“At this very moment, someone somewhere is busy inventing something that will be so common in but 10 short years that you simply won’t know how you lived without it!” – Futurist Jim Carroll 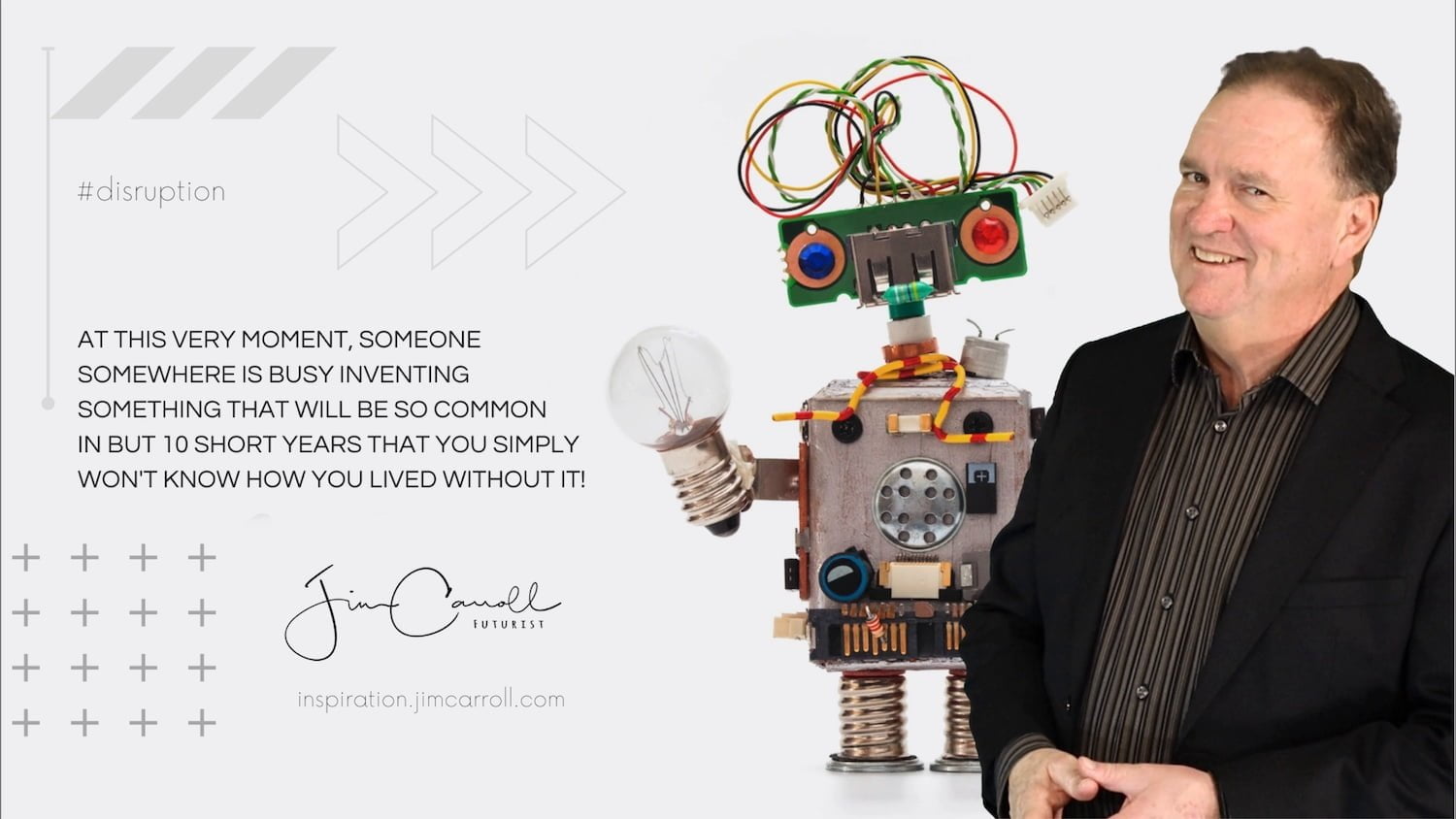 Need to get inspired for the future? Head on over to my post, ‘101 Things We Know About Our Future’ – An Esoteric List of Things That Are Happening Now and Next! – it’s right here. As I note in that post:

My mind all too often races with ideas; I think too much. The busy activities in my head lead me to regularly scribble down lots of thoughts about the world around me. Overall, as a futurist, it’s a remarkable time to be alive – and with that in mind, here’s a list that I’ve accumulated as to ‘101 things we know about our future.’

It’s a long list of things I’ve jotted down over time. My thinking? Here’s a grab bag of some of my thoughts, of which today’s quote was one.

This is THE mindset you need to be in as you prepare for your faster future!

The business world changed with Covid. Here’s what we saw: 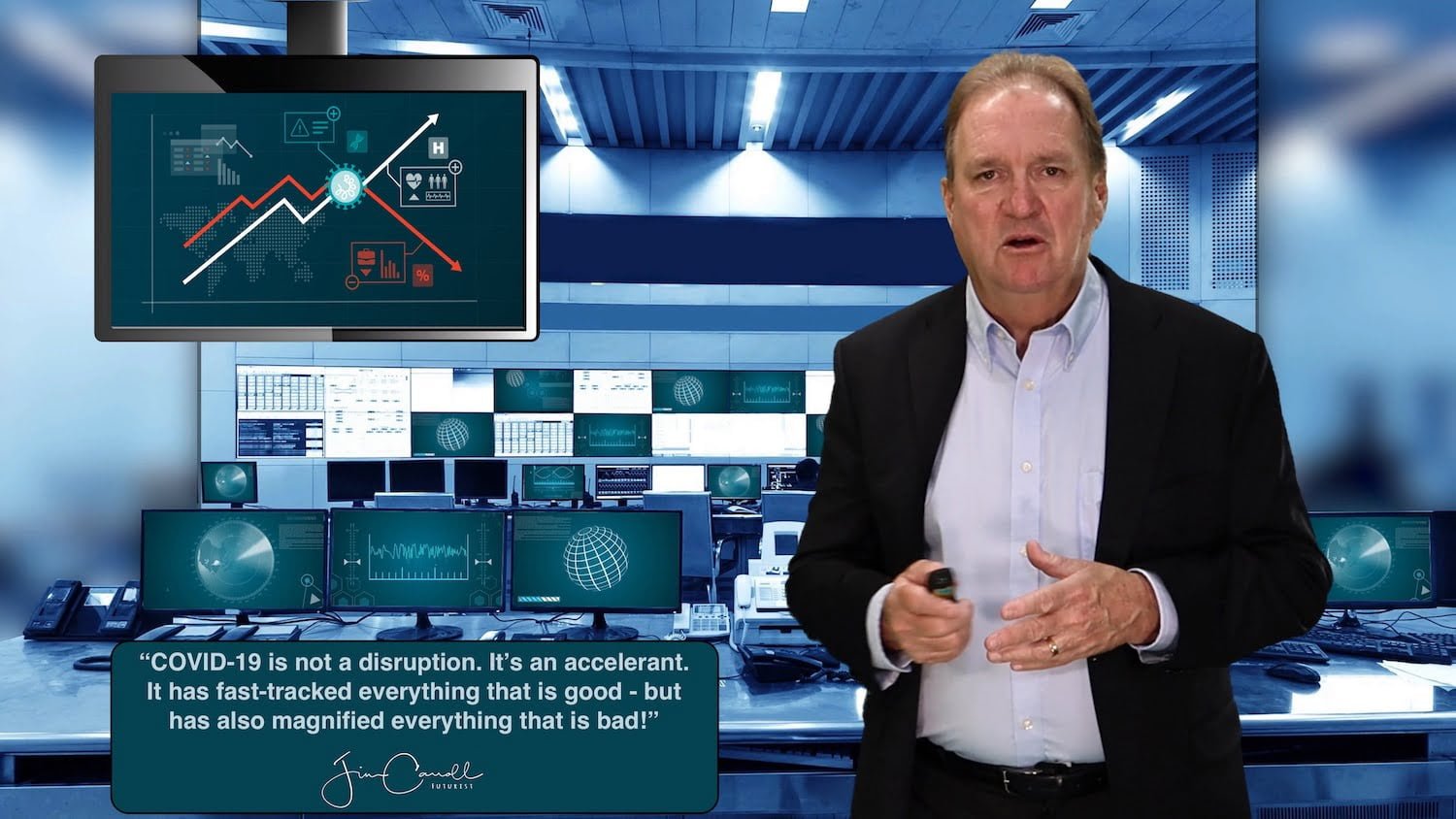 The key issue for everyone now is – how do we sustain the momentum?