Siemens has booked me to headline a major energy conference in Houston in May.

So I did a little video about what to expect. Give it a watch. We are going to see more change to the global utility/energy industry in the next 5 years, than we have seen in the next 100!

‘’You have a choice: be timid and small, or bold and big!” – Futurist  Jim Carroll 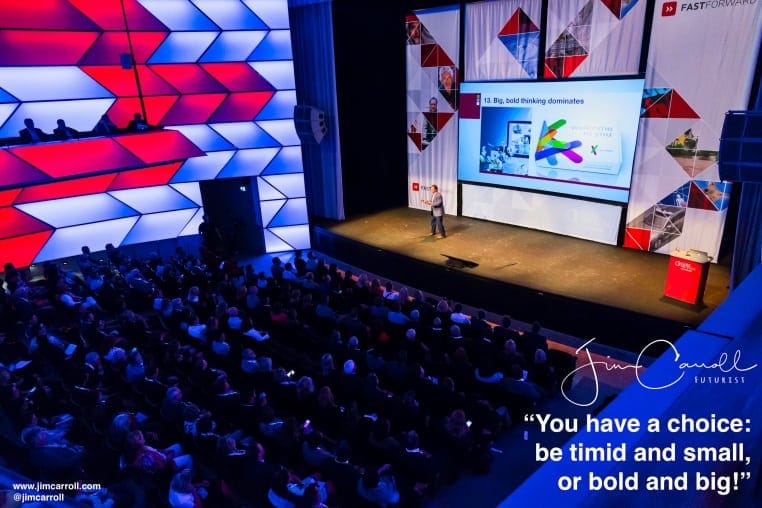 ‘’ Some mornings I wake up, and my story of the day is already in my mind. On other days, I’ll find a photo and chase the story from what I was doing on stage at that particular moment. That was the case today.
I found this photo, from an event last year – its still one of my favourite stages of all time! The photo itself has two great elements – a slide on a specific theme (big, bold thinking dominates) with a photo layout that itself is big and bold. It’s perfect for a quote.

With the picture as the energy for my imagination, I looked back at the video for the event in question. At that moment, I’m speaking about the fact that we live in an era in which people are making big, bold decisions, about their company, industry or personal life – simply because the accelerated trends of our time allow us to do so.

I often use a phrase in my talk, regardless of the industry – that we will see more change in the next 10 years than we have seen in the last 100. Is it based on pure fact? Maybe not. Is it exactly accurate. In some cases, yes; in others, not. But the fact is, it’s generally accurate, and it certainly grabs the attention of the audience. If that is the foundation of change today, what will you do to align yourself to it? Be bold!

In the era of acceleration, there is no time for being timid – you can’t hold yourself back by being too cautious, worried and scared. It is said that ‘fear is a great motivator,’ and this is often very true. Yet fear is NOT a great motivator for *some* things – it can be the anchor which takes you below the surface and slows you down. It’s better to let big opportunity guide you!’’

“Don’t turn your back on the future because of your fear of what comes next; instead, turn your face forward with a focus on the opportunity!” – Futurist  Jim Carroll 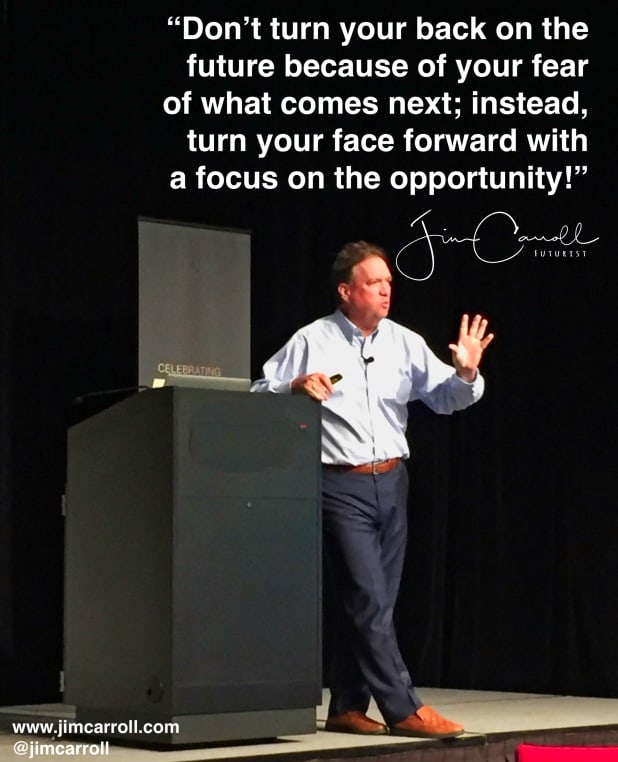 ‘’ That was the essence of my talk last night for the Chamber of Commerce of the Town of the Blue Mountains, Ontario, Canada.

In other words, don’t be like the people of Iowa.

ToBM, as it is known, is interesting town – it’s north of Toronto, a ski resort community, agricultural hub, tourism destination and more. It’s a mix of retirees moving north from the city, young people seeking a more adventurous, healthy lifestyle, and the traditional residents, some of whom are suspicious of progress and change. It is suffering from the typical issues that come with growth – such as a shortage of service workers – people who are different. Ah, that debate!

It’s also my home away from home during the winter months and some portion of the summer – we own a ski chalet there, and spend much time on weekends on the slopes.
I had some downtime in my schedule, they had need of a speaker for their AGM, and so our schedules worked out for me to come in and give a talk.

And as with everywhere else, there is a bit of a debate between the conservative old guard, and the progressive new arrivals. This plays out a bit in the local press, town hall meetings and more. Some of the more negative aspects of the current US political divide sometimes creep in.
I am convinced that the wave of negative political thinking that dominates the US today comes from a group of people who simply don’t like the future. They’d like the world to be just like it was in 1950 – not diverse, not moving fast, not global. They fear the future and everything it represents in terms of change. They long for the ‘good old days.’ And so they vote for someone who promises to take them back to where they once were, rather than where they might go forward if they align themselves to the inviolable trends of today.

My message last night – don’t be like them. Turn the future into one of opportunity through action, not an uglier future driven by fear.’’

Last but not least – this one was a huge amount of fun – it’s the community where my ski chalet is located, 2 hours north of Toronto, Ontario! 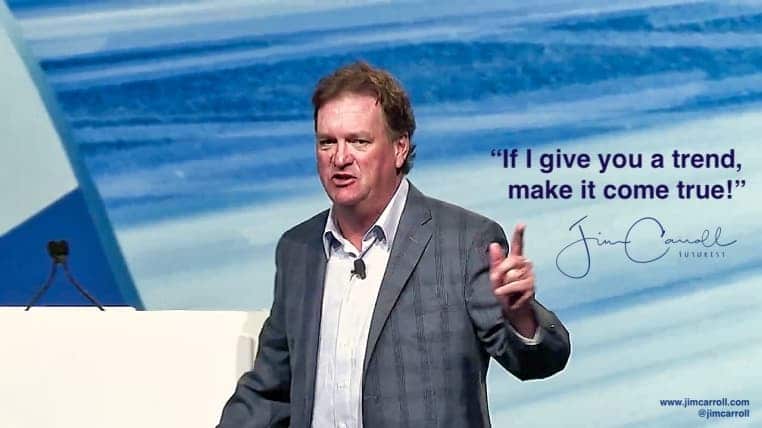 They were having their AGM – I wasn’t booked that particular date – and agreed to come in and speak about the global trends that will somehow shape their future!

What a huge amount of fun, with a number of friends, ski buddies and neighbours in the room. They finally had a chance to see the truly odd job that their friend Jim has.

All in all, it was a wonderful spring, with a continued emphasis on highly customized keynotes in a wide variety of different industries.

And stay tuned – the next few months feature an equal number of fascinating events!

“Are you the Pokémon GO in the room?” – Futurist  Jim Carroll 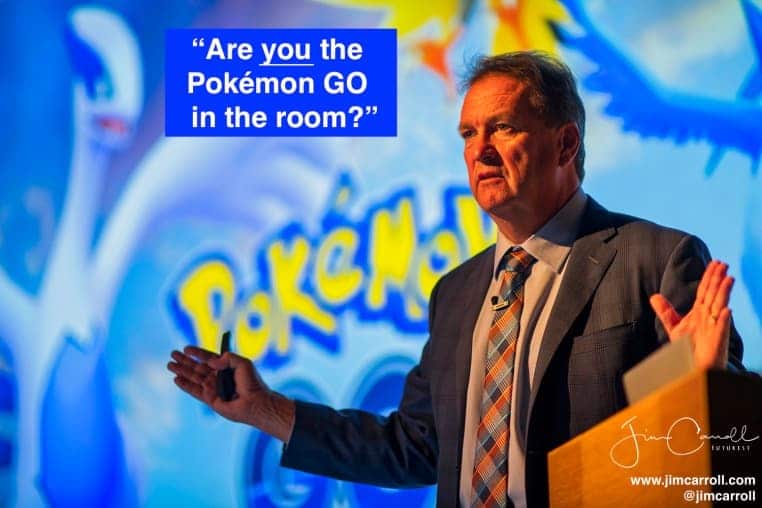 ‘’ We all live in Pikachu’s world! So the question becomes, what should we do on a personal level when change comes at us faster, and our world of next month might be totally different from the world that we know today?

That’s the modern day dilemma, both from a personal as well as an industry perspective. When Pokémon GO appeared in 2016, it was a massive hit and global phenomena – 750 million people joined in the craze in the early months. Yet, just as quickly, use of the game went into decline.Pokémon GO lost 79% of its players within a month, through a series of missteps, mistakes, miscues and misadventures – but also do the fickle and faddish nature of today’s consumer. It was the Rubik’s Cube of the virtual reality era! Yesterday, people were walking into traffic because of it – today, it barely registers in the global consciousness.

That could be your business strategy, your products, or your personal plan for growth. The story of how quickly Pokémon GO went from ‘hot’ to ‘not’ is a wonderful metaphor for the speed of change in today’s fast world. Product life-cycles are collapsing, particularly as they become tech-enhanced, losing relevance or functionality faster than ever. Attention spans are shorter, knowledge has a smaller shelf life, fads happen faster in todays’ world of hyper-connectivity, and the news of the moment barely lasts until the next flash hits.

A huge number of my speaking engagements are for global organizations – and specifically, CEO level leadership meetings. They are bringing me in for a talk on the key message that ‘the future belongs to those who are fast.’ They know that the struggle around speed is real, and that in order to survive and thrive, they must learn how to work and act faster. Otherwise, they might see the assumptions by which they operate today go the way of Pokémon GO tomorrow.

This particular photo is from my keynote for Nikon’s 100th anniversary gala dinner celebration in Tokyo, where I outlined strategies for coping in todays’ fast world.’’

Let’s face it – your annual event, conference or leadership meeting is critically important. The last thing you need is a speaker in the opening or closing keynote slot who is going to give you perfunctory attention, deliver a canned talk, take your money, and leave you wondering, ‘what was that all about?’

Not me! I take the approach that I’m going to have to work hard to have the right to take your money!

Consider a recent project I worked on with the Trapeze Group, a software company in the urban transit space. After some back and forth, they decided I was the right guy to open their annual conference in Nashville this June. What helped to convince them was the level of customization I do in terms of the topic — something that has earned me a global reputation with a massive A-list set of clients.

But it wasn’t just that – it was the fact that fact I would go the extra mile for them with ‘event collateral’ – material they could use to drive interest in and attendance at the event. After all, that’s one of the most important up front goals.

We’re not even 2 months away from the event, and here’s what the Trapeze Group has already!