Baker McKenzie is one of the largest, prestigious law firms in the US, and they’ve invited me into keynote their annual client conference in Dallas and Chicago this November.

So I went on stage before a keynote in Las Vegas, and filmed this little teaser video form them. Have a watch!

Check the Web site for more info, or click below. 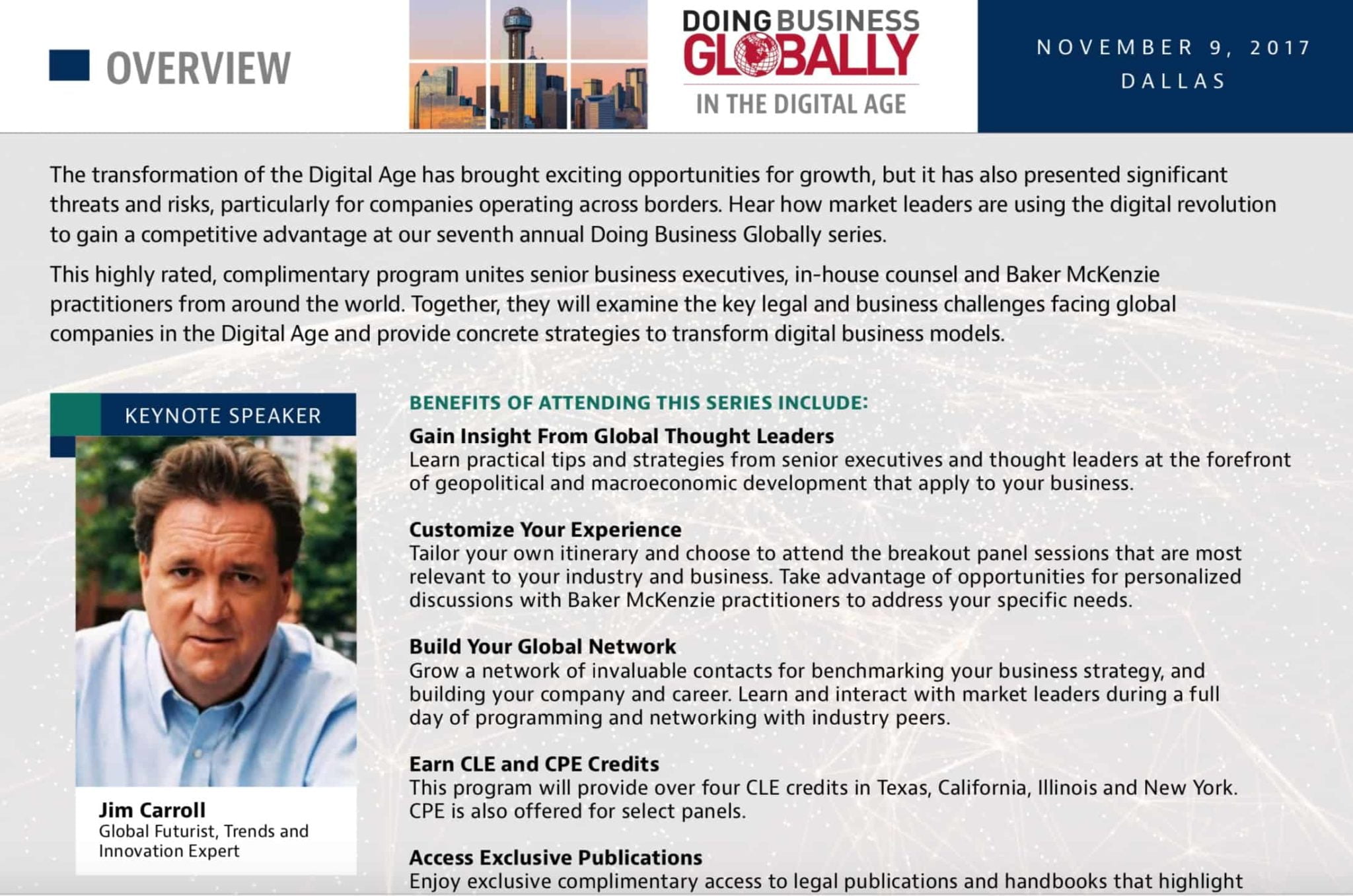 On stage, I have a little bit of fun pointing out that the cartoon below seems to summarize  the state of the political situation in the US today. I used it a few weeks ago when I keynoted the Nevada Economic Development Conference, with a talk that look a look at the opportunities for growth in the state through trends other than gaming and tourism.

Appropriately enough, my keynote featured the title: “The Jetsons Arrive 50 Years Early: What Are the Economic Development Implications?” (I love my job!). My talk examined the rapid evolution of science, business models, hyper connectivity, intelligent highways and autonomous vehicles, the future of agriculture and many other accelerating trends. 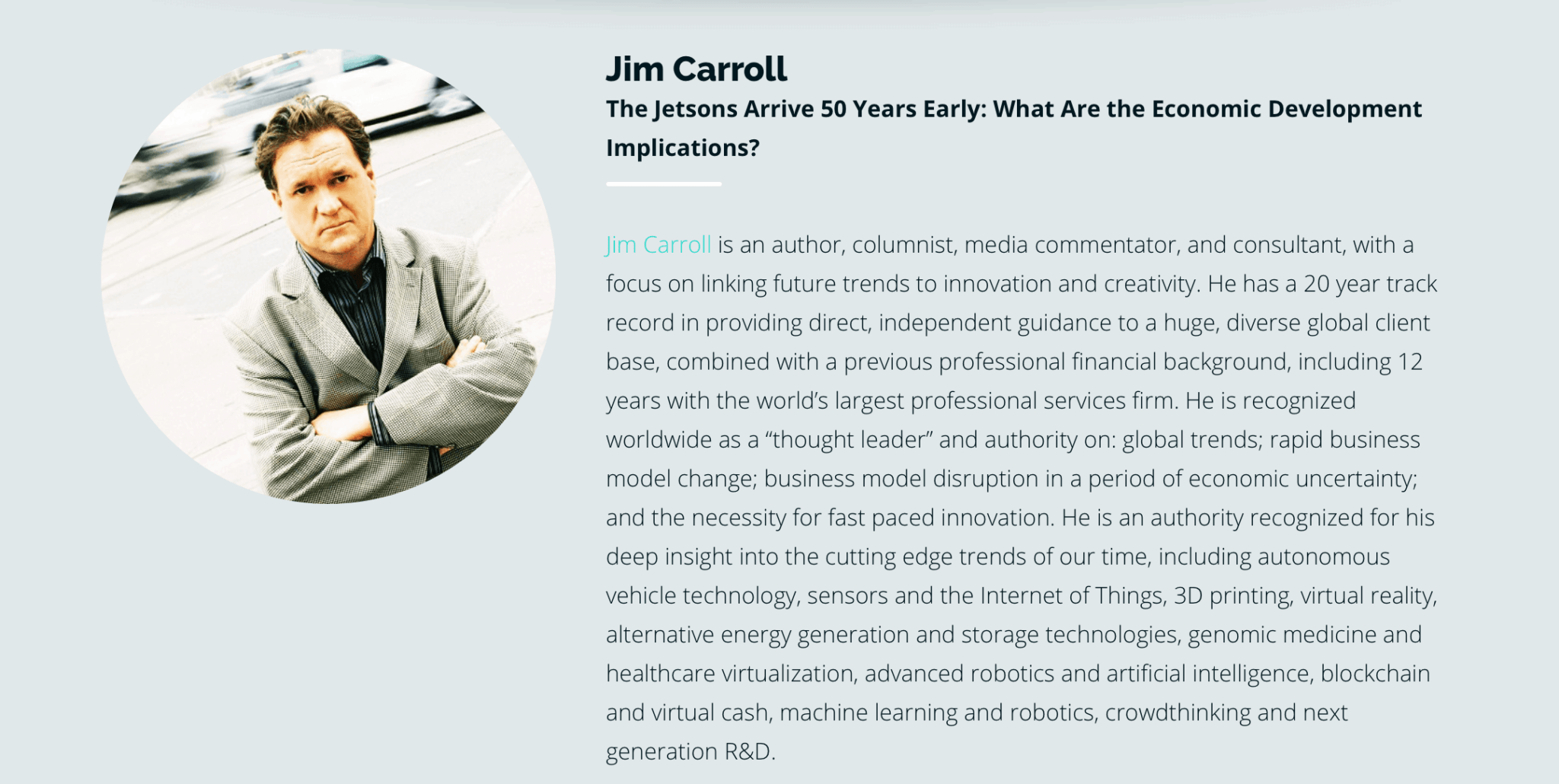 I guess it went well: the feedback just came in from the individual who booked me: “You were amazing.  Your presentation exceeded our expectations.  Your knowledge and insights were intriguing and inspirational!”

After my talk, I had a chance to chat with a reporter for the Las Vegas Business Press, who ran an article about the conference. An excerpt from the article appears below. Obviously, the decision by Amazon to locate a 2nd headquarters somewhere had the attention of everyone in Las Vegas, as in every other jurisdiction in North America.

But the future isn’t just about Amazon! It involves a region aligning itself to the trends of the Jetsons in the 21st century, rather than trying to find hope in the era of the Flintstones of the past!

One of the speakers was Jim Carroll, a futurist and expert on trends and innovation and author of “The Future Belongs to Those Who Are Fast.” He said there’s a massive number of global trends and Amazon and online shopping is one that’s providing jobs and future economic growth. Robotics and artificial intelligence are part of the story line of the future as well.

Carroll said Northern Nevada landing the Tesla electric car gigabattery factory shows there are no limits of what the state can attract.

“There’s an opportunity here, and Nevada is waking up to the fact that it’s not about agriculture, gaming and tourism,” Carroll said. “There’s a lot of other big trends going on in the world of which Amazon is just one. Why not get into the mindset that we can pursue all of these things?”

Carroll said he speaks at conferences across the country, and there’s going to be a lot of competition to land Amazon and it seems that every state and metropolitan area is going after the headquarters.

“When it comes to Amazon, every jurisdiction in North America wants it,” Carroll said. “It’s going to be a massive competition. It got the attention of every single development group in North America.”

Nobody knows what’s Amazon’s preference is for locating the second headquarters, Carroll said. The company will be looking for skills, incentives and locations. It’s possible executives want a location closer to the center of the country, he said.

“I think first and foremost any region shouldn’t get into defeatist mindset,” Carroll said. “We’re never going to get ahead if that’s the way we think. That’s why I encourage people to start with a positive mindset.”

Carroll repeated that Amazon is only one of what will be many “big new initiatives” and companies that regions can pursue. He said the future will be about batteries, and it’s not just about Tesla’s electric cars but batteries in drones and for utilities and energy.

“Amazon is but one thing of many things happening out there,” Carroll said. “What Nevada needs to do is get the mindset of how do we position ourselves for one of these many things beginning to unfold?”

“We’re going to get to the 22nd century,” Carroll said. “We’re not going back to the 1950s. There are those who say, let’s focus on coal and wave a magic wand and bring back these manufacturing jobs, which are dead gone and not going to happen. If we look at the world of manufacturing, it’s all about robotics and 3-D printing. It’s all about mass customization and about the ability to design products faster and get them to market faster and highly intelligent connected products.”

Nevada is making the right bet focusing on solar and wind energy and microgrids, Carroll said. It’s about the acceleration of energy science rather than coal, he said.
Nevada shouldn’t worry about trying and failing like it did in landing a Faraday Future electric car plant in North Las Vegas, only to have the project stopped before it began, he said.

“There’s a lot of angst about the car plant that didn’t go ahead, and my take is you have to try that,” Carroll said. “Some of that stuff works and some of it doesn’t, but you got to make sure you are out there and hitch yourself to a horse. Sometimes you fall off and have to get up again.”

“Count your blessings. Not your chickens!” – Futurist  Jim Carroll 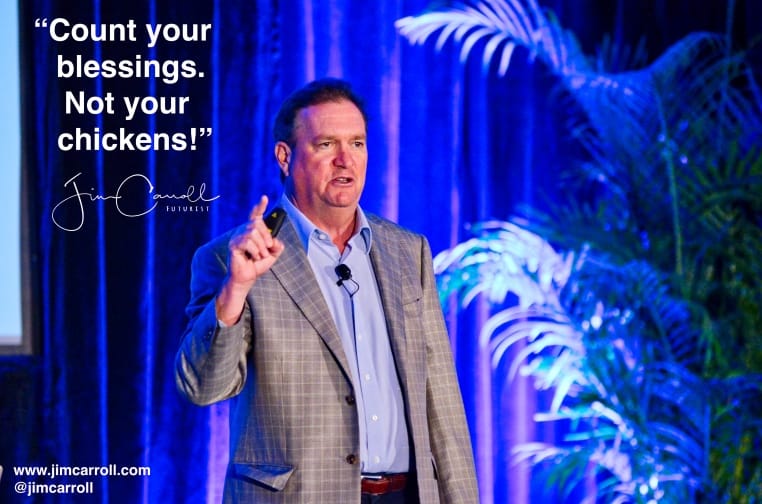 ‘’ I’ve been doing this daily quote for just over a year now, and it’s become a bit of a thing. Before anything else, I’m having my coffee and putting together today’s thought.

But it starts before the coffee. This morning, as I was waking up, I spent some time to think about today’s phrase. The word ‘gratitude’ came to my mind – I have much to be thankful for. That was a great thought to start the quote – count your blessings!

My mind drifted a bit, and I thought about how too many people get ahead of themselves, and develop over expectations of success. Caution is always a good watchword….don’t count your chickens before they are hatched!

And in an instant, my mind spun back to the first word — and it made sense to combine the two thoughts in a unique and quirky way.

And with that, there’s the thought process this morning. Enjoy!

Go on, admit it. You only follow me because of the pictures!” – Futurist  Jim Carroll 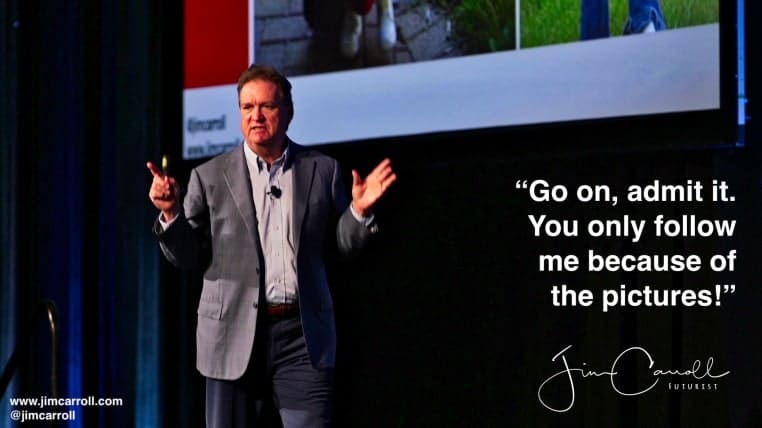 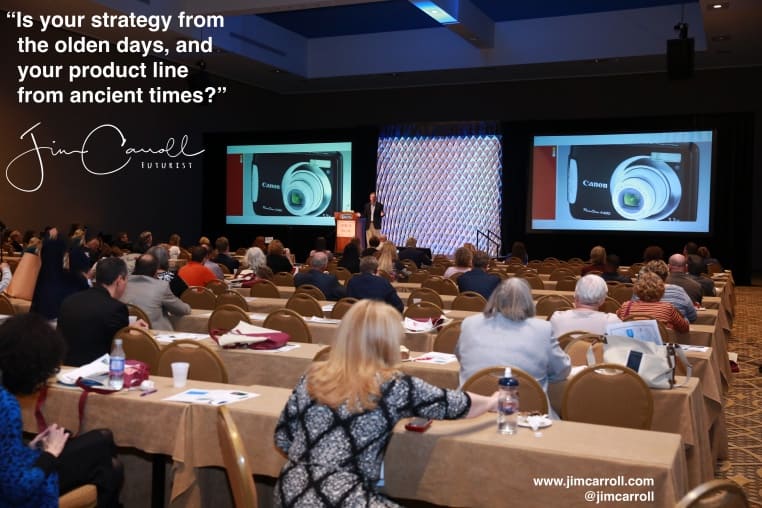 This is a new group — 3 years old — that represents the 1-800 toll free service industry, and the invited me in for a keynote on trends and issues impacting consumer behaviour. I spoke to issues around mobile, increased and accelerated expectations for customer support, and how the Amazon effect is coming to affect the latter, to name just a few issues! 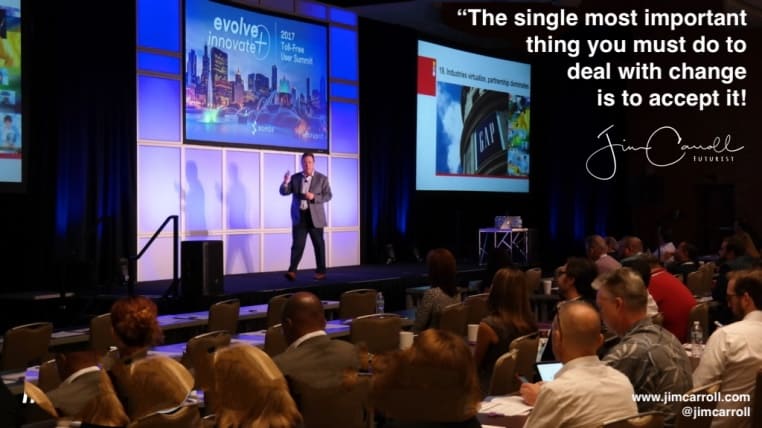