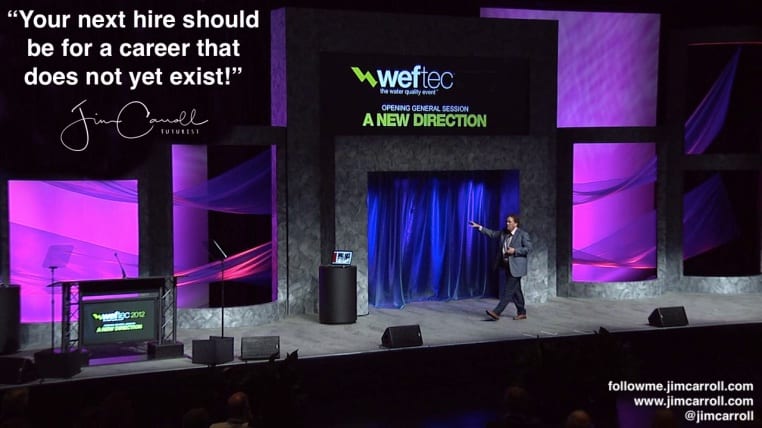 Jim spoke on the innovative and creative methods that organizations will have to use to cope with the looming skills crisis, and how to deal with skills cost inflation.

The following article was just published in July in AkzoNoble’s  “A” Magazine, featuring some of my thoughts on innovation in organizations.The organization is the largest global paints and coatings company and is a leading producer of specialty chemicals.

The article is a good read as to how I think and work.

It was distributed in print form to several hundred thousand readers in their global client base.

You can grab the PDF of the article by clicking on the magazine cover on the right.

WHAT’S YOUR VISION OF THE FUTURE
by Jim Wake

If routine rules your working life, you could be stifling any chance of growing and improving your business. Worse still, if you fail to encourage creative thinking, you could well be doomed to failure.

Innovation is not what you think it is, says Jim Carroll, a self-described “futurist” who makes a living advising many companies on how they can reinvent themselves to compete effectively in a fast-changing world.

But what Carroll tells them – in ways designed to get them to laugh at themselves and squirm in uncomfortable self-recognition – is that innovation is both more mundane and more achievable than dreaming up the next breakthrough consumer product, writing brilliant computer code, or developing new methods for microsurgery.

To Carroll, it’s a lot more about awareness than it is about genius.

“Running the business? Innovation offers all kinds of opportunities to take costs out of the business. With computerized technologies to streamline processes, for example. It’s just unlimited potential. Growing the business is all about how we get into new markets, new product development, and how we generate revenue where revenue hasn’t existed before. Transforming the business is about restructuring ourselves. How we collaborate better, how we reshape the way we’re doing R&D, and how we do things differently as an organization.”

“A lot of people still think that innovation is some deep mysterious thing,” he goes on. “To me, the link is that there’s a whole bunch of obvious trends which are going to impact an organization, whether they’re demographic, social, political, business trends, whatever. Innovation is simply responding to and keeping up with those trends. Some of it is drop-dead obvious: in Western society, we have a looming boom of baby boomers who are going to become older and sicker and require more care, so that just impacts a whole variety of different industries. With technology, there’s a whole bunch of fascinating trends underway wit a lot of everyday devices around us are going to gain intelligence, are going to be linked to the internet, so that’s an obvious trend. And in terms of politics, what’s playing out in Egypt – where there’s a transition of power from one generation that is unplugged, unconnected, to a different generation that is plugged in and connected. Those are the kinds of obvious trends I’m talking about.”

But of course, what is obvious to Carroll – who acknowledges that research is an important part of what he does – may not be so obvious to the person who is focused on meeting deadlines and paying the bills. Still, he is convinced that management can nurture an environment which encourages creative thinking and the willingness to take risks that is pretty much a prerequisite for innovation.

“I call it tone at the top. It is something that is CEO-led. He or she has to set the tone for a culture which allows for continual change and adaptation and innovation, in order to keep up with the very fast-paced change around us. If you don’t set that tone at the top, then you really are doomed to failure. I see a lot of organizations try to make innovation something special. They form a little innovation team and go off in a little room and study innovation. But that just doesn’t work. It’s a culture throughout the organization where the leadership is saying to everyone that you’ve got to challenge yourself on those three questions, and we will judge you during the annual review process and in your remuneration and in your job description.”

One example he points to is Google, which provides “innovation time off” – a provision allowing engineers to devote up to 20 percent of their time on projects not directly related to their job descriptions or responsibilities.

“It’s important,” says Carroll, “that organizations establish a whole series of projects that are very focused on innovative outcomes, in addition to having everyone responsible for day-to-day innovation.”

He also suggests that routine is one of the biggest threats to innovation.

“I think it’s very easy for an organization to go into autopilot. If you can do something to shake up their complacency – whether it’s the rebel coming on board or doing something to cause some chaos – that’s a good thing because people need to wake up to how quickly their world is changing around them.”

In his talks – he gives dozens every year to audiences as diverse as Texas bankers, California cattle farmers, national park management professionals and the US Professional Golfers’ Association – he can almost be aggressive in trying to combat complacency.

“Here’s what I’ve learned,” he says during one of his videos from a keynote speech. “In every single organization there are people who wake up every single day. The very first thought that comes to their mind is ‘what am I going to do today to kill new ideas?’”

It’s a comment which provokes nervous laughter, but that’s because everyone in the audience recognizes a kernel of truth there.

“You know that they’re out there because they come into their meetings and you’re presenting new concepts and new ways of doing things, and they’ve got all these little code words that they use to shut ideas down.”

If Carroll had his way, the phrase “You can’t do that because we’ve always done it this way” would be grounds for immediate dismissal.

“Never mind that the world is going to change, that the world is going to go over there really, really fast, and we’re still here and we have to get over there with the rest of the world,” he says mockingly. “There are people out there who’ve adopted the attitude of ‘you can’t do that; we’ve always done it this way – it won’t work!’ You come up with a really good idea, you put it out there, you seek some reaction and there is a naysayer at the table who immediately says: ‘It won’t work’; or ‘Dumbest idea I ever heard, it’s too risky, we’re not an organization that takes risk.’” He lets the thought hang there for an instant and then points out the obvious: “The only way to get ahead is to take risks.” As if he himself has suddenly been appointed CEO, he then starts issuing orders to the audience: “Each of you from this point on agrees that you will never use, or permit to be used in one of your meetings, that phrase ‘you can’t do this because we’ve always done it this way’. You’re going to completely ban that phrase ‘it won’t work, dumbest idea I ever heard’. You’re going to banish the type of thinking that tries to hold us back from doing new things.”

He encourages his audience to conduct a simple test the next time they are sitting in a meeting – keep score of the “innovation killing” phrases that come up: a point for every time they hear “it won’t work”, “you can’t do that”, “I don’t know how”, and several others demonstrating fear of trying. Five bonus points for “The boss won’t go for it” and ten for “Why should I care?” Your company is already in trouble – innovation-adverse, in his words – if you score more than five, “innovation dead” if you score more than ten, and you might as well either close up shop or give him a call if you score more than 15.

At the other end of the spectrum are the behaviors, practices and corporate cultures that generate new ideas – ideas flow freely throughout the organization, subversion is considered a virtue, creative champions are present throughout the company, people understand that innovation is not just about

technology, but about doing things differently and better, and that failure is an inevitable – and acceptable – part of the innovation process. “Hire people you don’t like,” he urges, and “forget everything you know”. In this changing world, he claims, we don’t need MBAs so much as we need “MBIs” – Masters of Business Imagination. “The phrase Master of Business Administration is about running the business. That’s great, but what are you going to do to grow and transform the business? We [spend] more time thinking about how our markets are changing, how we might build new relationships with our customers, thinking about how we might go in and disrupt other business models and how we might ingest technology faster to do awesome things within our industry. We should just have a lot more people with a lot more imagination on our team.”

Carroll wasn’t always a change guru – he spent 12 years as an accountant. But somewhere along the way, he realized that technology was moving much faster than the business world, and that there was a business opportunity convincing the corporate world that it needed to change to accommodate new technologies and trends, or get left behind. He points out that Apple generates 60 percent of its revenue from products that didn’t even exist four years ago, and that the only thing that is certain is

that everything will be different before you know it. Half of what students learn in their first year in college is obsolete by the time they graduate. “Having been at this for 15 years,” he says, “I think that the necessity for organizations to get on board with this type of thinking is becoming more critical, because business is changing faster, customers are changing faster and technology is changing faster. My key word is velocity. The need to do a lot of radical things is speeding up because everything out there is speeding up.”

I shared this event with Jimmy Wales, the Founder of Wikipedia. And to this day, Wikipedia editors still won’t list me. LOL. My keynote covered the acceleration of business models and disruptive trends for a group of CEO’s of clients of this global hi-tech firm. Obviously, given the location, there was a bit of a golf theme and a bit of golf! 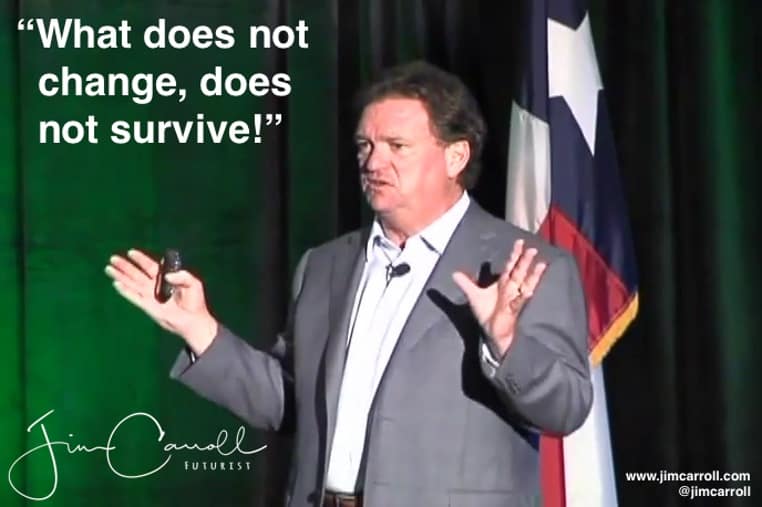 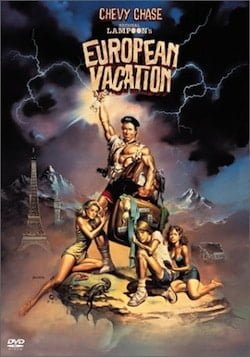 I’m off to Europe to keynote two events; the first, a private talk on future health care trends for a major European organization.

The second is in St. Andrews Scotland, where I will be speaking to a a group of business executives.

Yes. I will golf.

The family is coming along, and so I’m otherwise busy.

If you do need to reach me, send me an email or call. I will be checking messages once in the morning, and once at the end of the day.