“What excites me about the future also terrifies me!” – Futurist  Jim Carroll 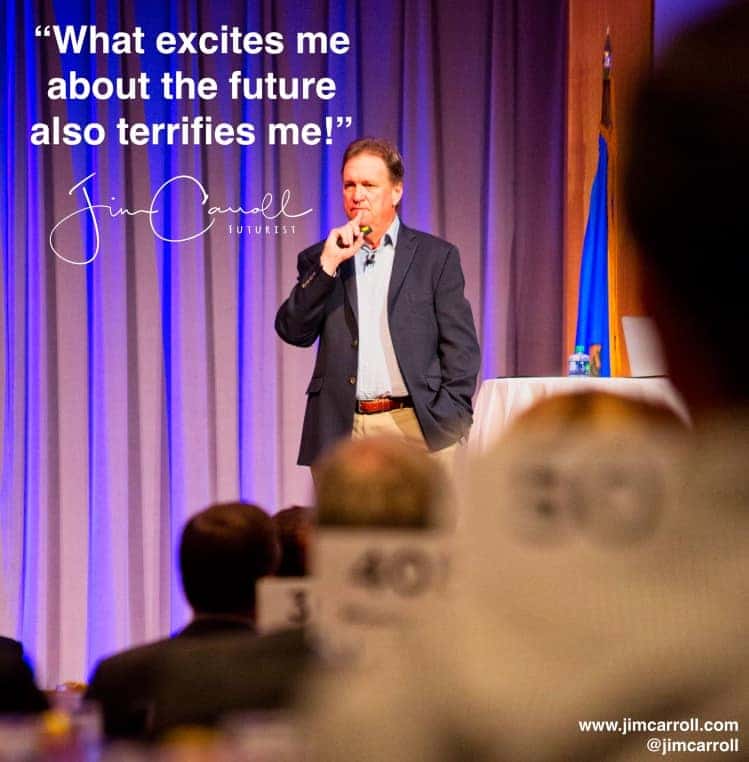 ‘’And, as they say, fear is a great motivator!
What I’ve learned from successful innovators is that despite their discomfort with where some trends will take them, they still push ahead. Some people see a trend and see a threat – innovators see the same trend, and spot opportunity!
I used to obsess over the reviews from my audiences; any single negative review was always a cause for stress. But over the last several years (I’ve been at this for 25), I’ve come to learn that for some people in the audience, any negative review won’t have anything to do with me, but rather, my subject matter!

Some people just don’t like the future. They like the status quo. They would prefer that things wouldn’t change. They look at a massive trend like Amazon riding the wave of connectivity, consumer change and logistics, and think that we should just go back to the world of retail as it was in 1980. Wave a magic wand, make a few angry statements, and their fear and ignorance on display.

The same thing happens with my audiences. There is always a small percentage who simply don’t like the subject. They come up with goofy ideas to try to rationalize their discomfort with the fact that the world around them is changing in a way that they don’t understand.

So while the future might terrify you, it’s where you are constantly travelling to – so you might as well shape it to your benefit!’’

I’ve been booked by the folks at Eye Recommend to close two conferences in Edmonton and Niagara Falls, Canada, next month and this fall. I will be speaking to several hundred optometrists and their staff/vision care specialists on trends related to he future of their industry. This follows a highly successful similar talk for Nikon Optical in Tokyo.

I filmed this little video overview of the big trends impacting the profession and industry going forward.

“Don’t be overwhelmed by the big things; just do the next thing!” – Futurist  Jim Carroll 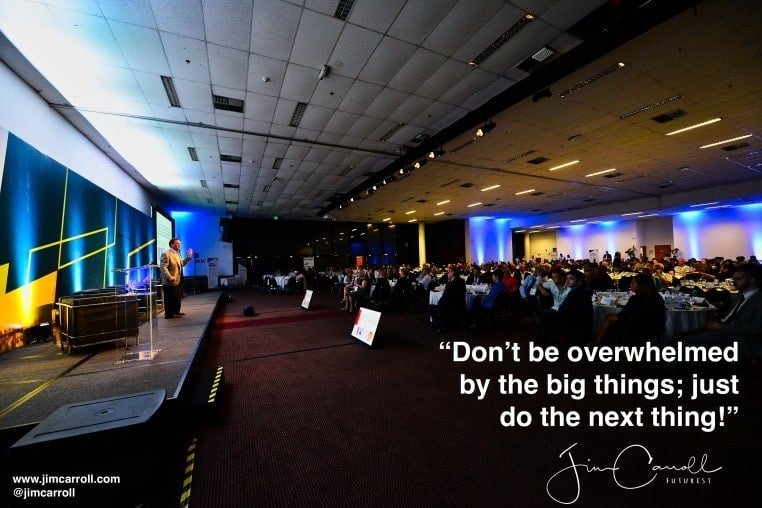 There couldn’t be better guidance for a Monday morning and the start of a new week!

My mantra to “think big, start small, scale fast” kicks in once again with great guidance! When faced with a list that is long, projects to do, deadlines to meet, it’s very easy to get discouraged, panicked, and worse. That’s not a great way to move forward.

Just do things one project at a time. It makes it easier to deal with the fast scope of your bigger, overall goal!