“When your decision desk can’t come to a decision, volatility defines your future!” – Futurist Jim Carroll 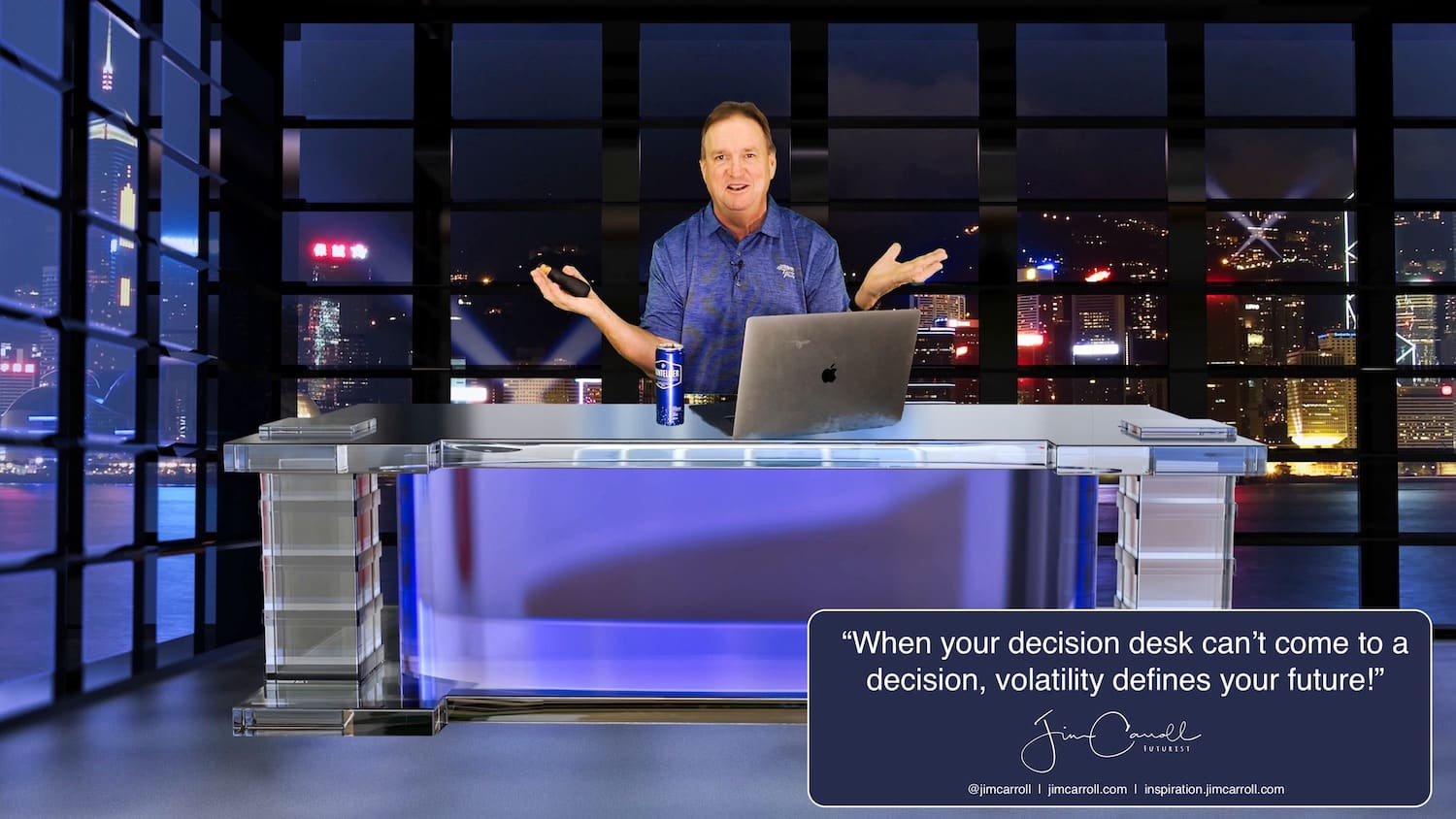 Are we there yet? It seems not!

That’s also the case with my virtual home broadcast studio – for a long time, I’d been wondering if I might be able to do a virtual desk setup, and played around with one last week. I thought I’d give Jake Tapper or Chris Wallace a run for the money. But seriously, I’m seeking a lot of innovation in which I can share my insight from the virtual studio. The biggest challenge so far is getting the size and scale of the virtual desk right

Next step – I should do some sort of magic wall like John King! The guy is the Energizer Bunny of smartboard data analysis!

So many projects – so little time!

Back to my main point – my job is to figure out what comes next.

I’ve got a rough idea of the key points for my upcoming post, “What To Expect When Your Future is Unexpected: Thinking Through 2021.”

I’m just waiting for a little bit more clarity from my decision desk as to how things will unfold!

“100% of certainty is the fastest way to meet with failure!” – Futurist Jim Carroll Is the week over yet?

I actually saw this quote on a skiing group I follow on Facebook; it’s full of all kinds of fascinating things to do with the sport. Last week, there was a thread with a lot of bravado and pictures about skiing what are nothing more than steep cliffs. 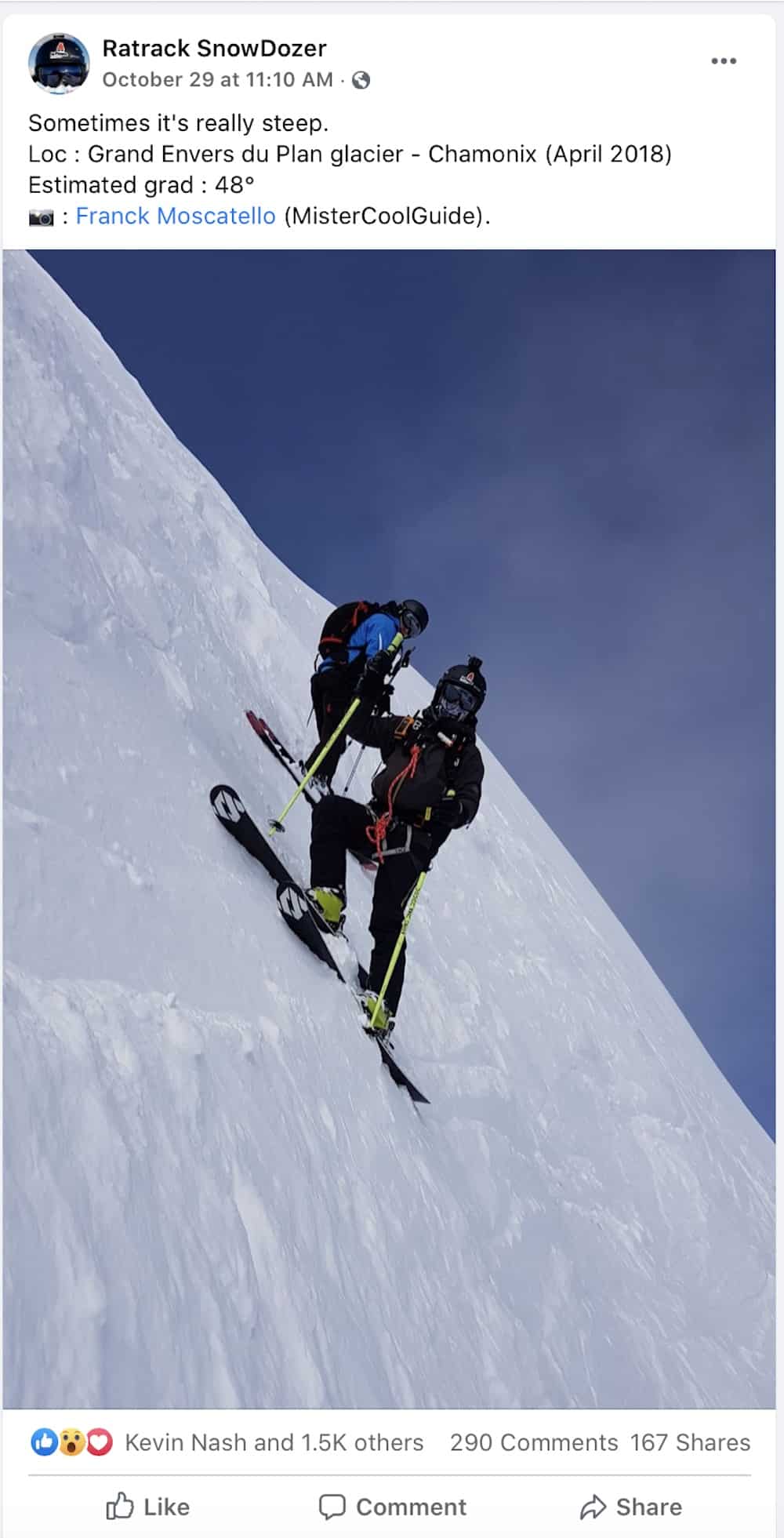 In the comment thread on this photo, one individual, full of bravado, boasted that he was quite certain that he would easily be able to ski such a pitch – to which came the comment, “100% of certainty is the fastest way to meet with God…!”

That seems to sum things up when it comes to our certainty as to anything at this particularly fraught moment in time. I’m working on a blog post as to how 2021 is going to unfold. The thing is, I don’t yet know how it is going to unfold, and neither do you! There’s not a lot to say this morning.

Sometimes, an image just speaks for itself.

I wrote a blog post in 2017, based on a talk I gave to an overseas client.

Trends: What Comes Next with the Decline of an Empire?

I’m not quite sure how I will update it you yet – I’ll do that once our future becomes clear – but I did film this! You can’t discount the significance of what happens if a nation chooses to give a finger to the future.

“When a promise can’t stand the test of honesty, then failure is inevitable!” – Futurist Jim Carroll 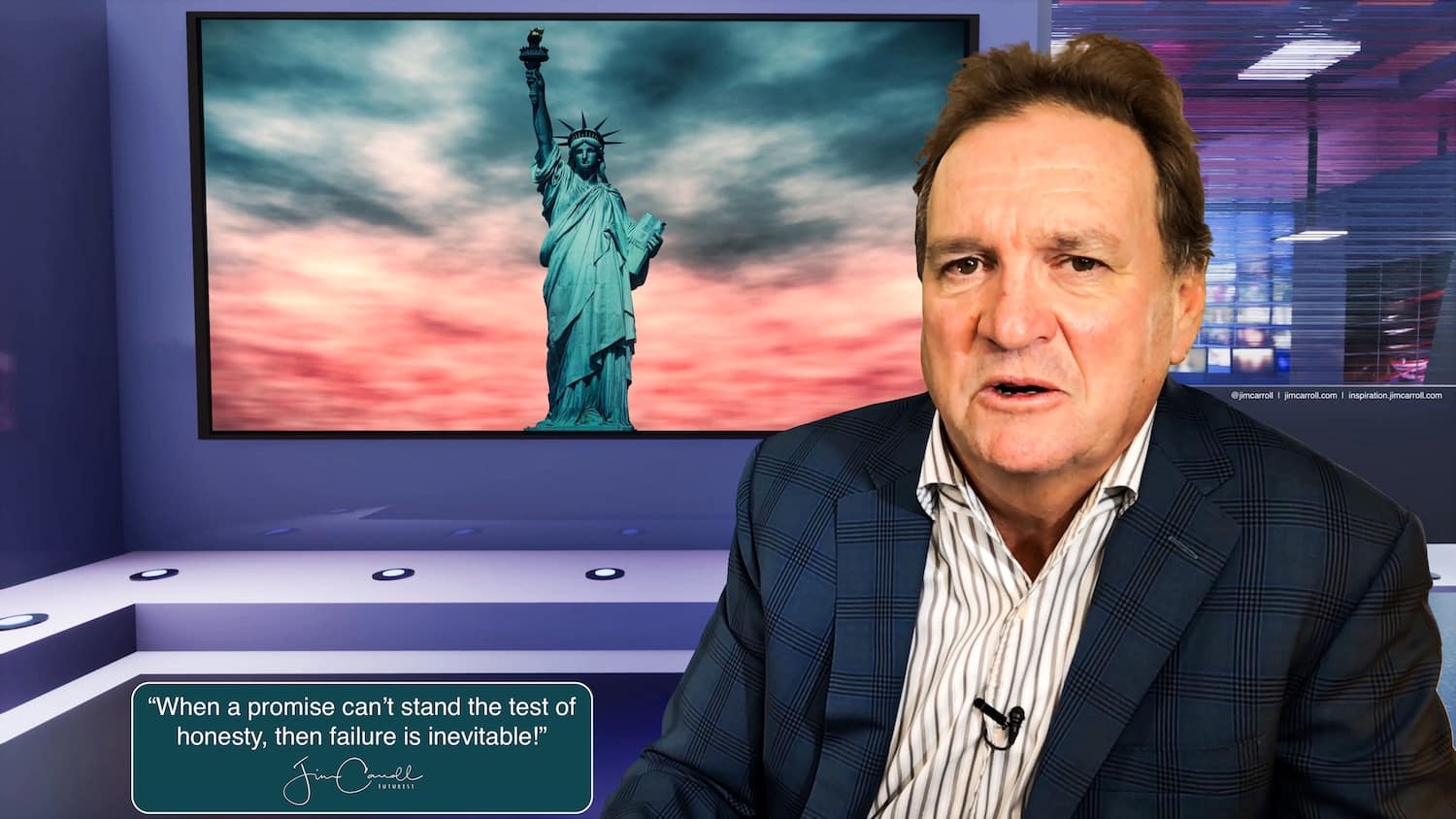 No doubt the world watches in disbelief, trepidation, the foreboding of horror, shock, denial, fear. A full range of emotions runs rampant; a collective breath is inhaled.

But make no mistake – what unfolds today and over the course of the next several weeks will have seismic consequences for the rest of the 21st century and beyond. Everything is on the table – the climate, human decency, the opportunity for advancing global freedom and democracy, health…..

Take a look at the final pre-election opinion by Thomas Friedman, which sums it up best:

“There is no escaping it: America is on the ballot on Tuesday — the stability and quality of our governing institutions, our alliances, how we treat one another, our basic commitment to scientific principles and the minimum decency that we expect from our leaders. The whole ball of wax is on the ballot.”

He goes on to note:

“If America goes dark, if the  message broadcast by the Statue of Liberty shifts from “give me your tired, your poor, your huddled masses yearning to breathe free” to “get the hell off my lawn…”

It goes beyond that:

“…if foreigners stop believing that there is somewhere over the rainbow where truth is still held sacred in news reporting and where justice is the norm in most of the courts, then the whole world will get darker. Those who have looked to us for inspiration will have no widely respected reference point against which to critique their own governments.”

The globe today runs the risk of losing final respect for the one nation that, despite all its mistakes and blunders, has stood the test of time as a beacon of hope.

If the flame goes dark and is extinguished, we all lose.

“Home Sweet Office! 30 years today, I began the voyage that would help me reinvent my future – and discover the magic that lay within it!” – Futurist Jim Carroll 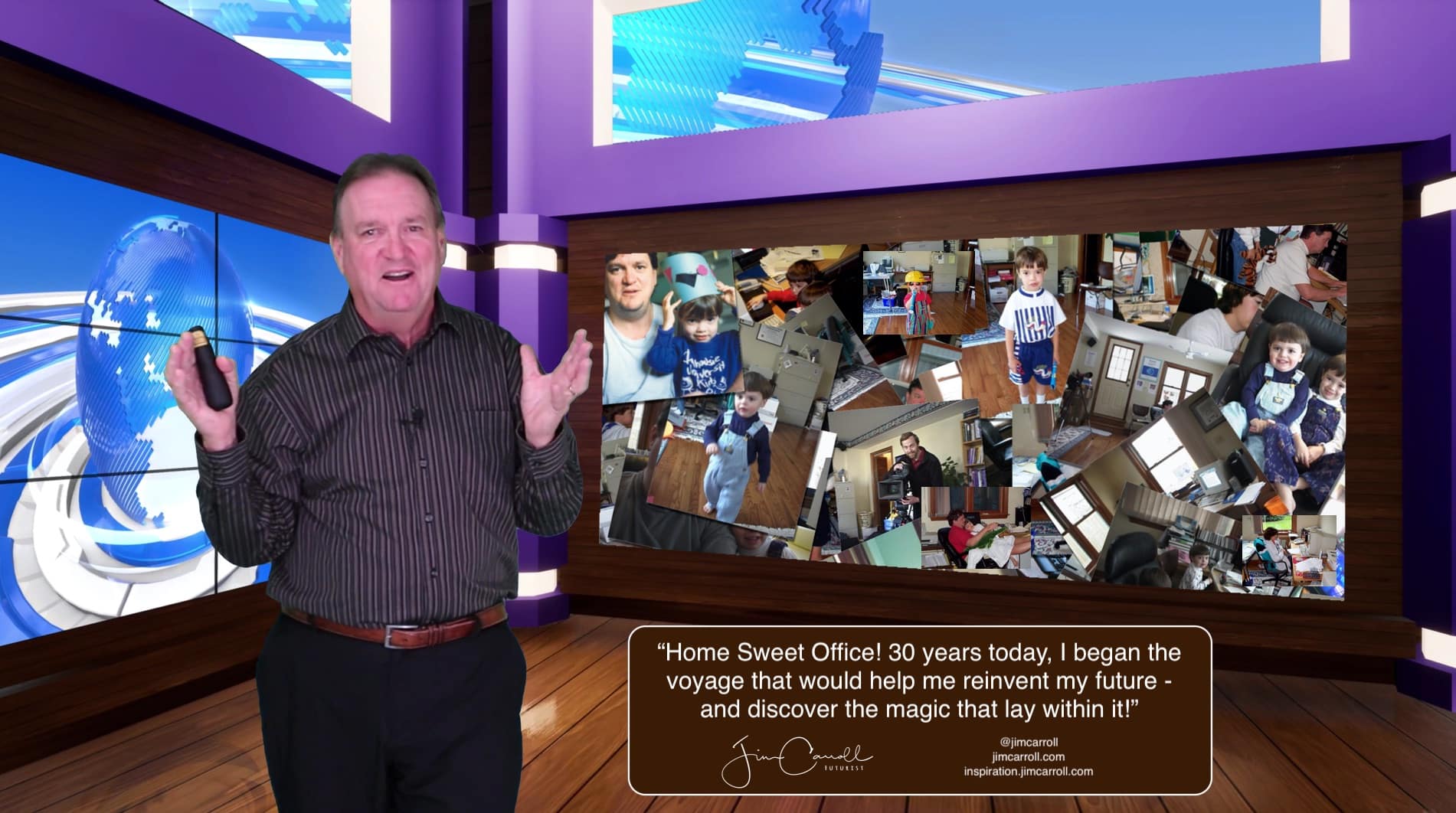 30 years ago today, I began a new career, working at home, leaving the corporate world to pursue my own passions and interests! I’ve never looked back – and in fact, have been blessed to experience such absolute joy in the home office each and every morning.

It’s a crazy story, really. A full-fledged CPA (Canadian Chartered Accountant), I decided to leave what was then a predecessor firm of KPMG to build a career as – wait for it! – an e-mail and online information resource consultant. I had a great starting contract with a major Canadian company, but after that, had no idea how things would unfold.

The technology at the time? My initial office had me with a Toshiba 3100 laptop – sporting 1MB of memory, a massive 10-megabyte hard drive, and a 2,400 baud modem! Frustrated by the speed, I would soon move up to a 9600 baud super-speedster!

I was only able to take on this risk because my wife – we were newly married – had a stable job as the Tax Manager / Controller for a massive global food company. Listening to me each morning during our morning commute on the train, I think she sensed that I might forever be happier working in a world in which my imagination for the future was not being compressed by the inertia of an organization.

The fact is, I knew something big was happening in online world, and I wanted to be a part of it! I would soon go on to write my first book about the online with another fellow – and within but 6 years, we would pump out 34 books in all, becoming the Lennon and McCartney of the Canadian Internet scene.

Beyond that, a career path began to unfold that truly became unimaginable – just a year ago at this very moment, my wife and I were getting ready for a trip to Marrakech, Morocco, where I would deliver a keynote address for an event for the World Bank! I found myself on stage all over the world, sharing my hopes, dreams, insight and pathways for success.

The real magic, though, came from a life lived working t home with my wife and the joy of starting a family – and then watching my sons grow through each and every day from my home office. I think is the most wonderful career success of all – I am blessed beyond belief.

Imagine the joy that comes with the arrival of your first son, and then getting to experience this moment of joy through each and every working day, throughout the day! Or starting your day with storytime as soon as they woke up? This went on as a regular routine for at least two years! 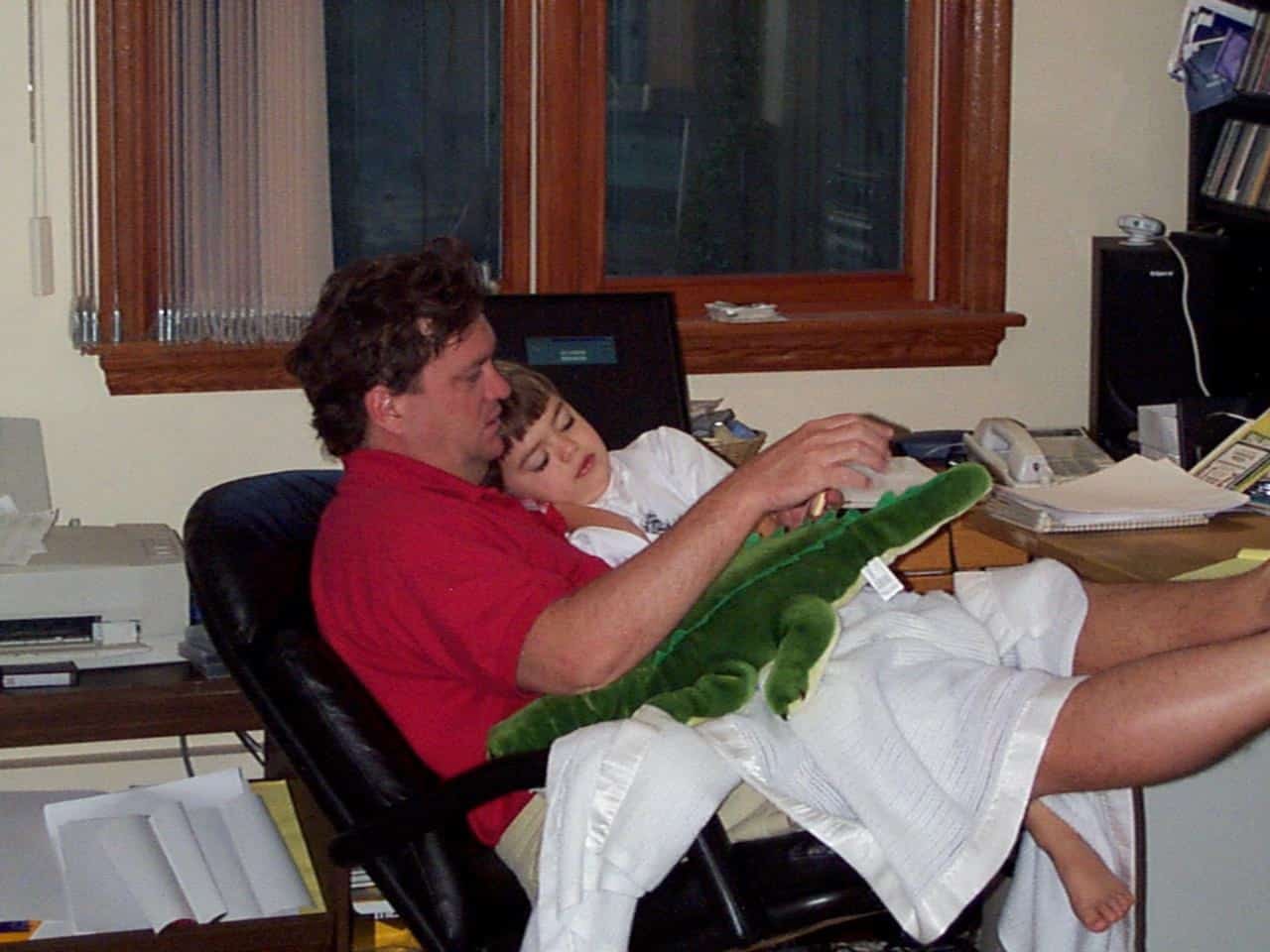 Imagine being on deadline for something, and seeing this little fellow come barging into the office to interrupt your thoughts! 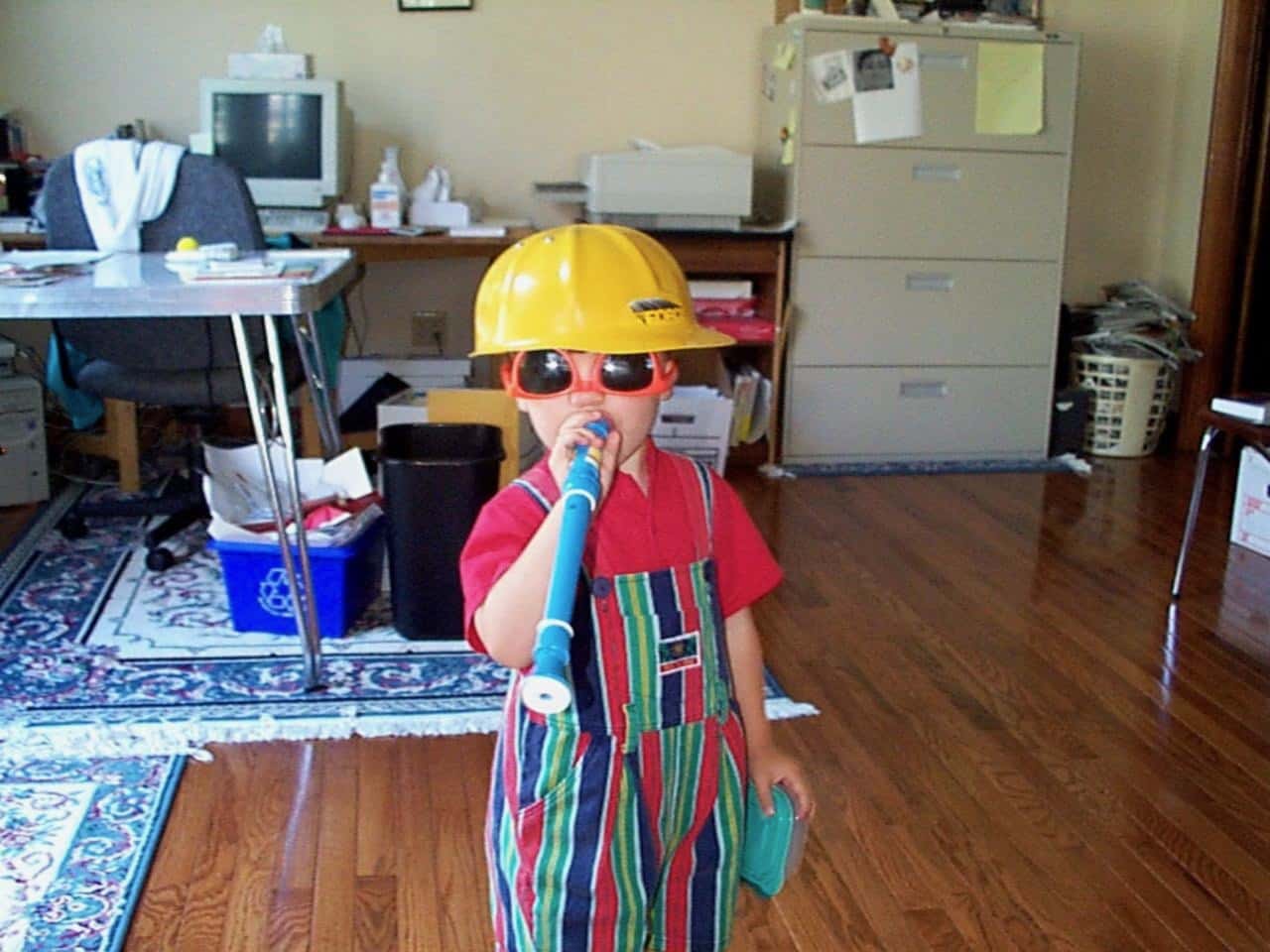 Imagine walking in – and finding Teddy being sacrificed to the altar of technology on the fax machine! The voyage has not been a solo one. In just over four years – after returning to work for six months after the birth of our first son and missing him terribly – my wife would leave her own job to start working with me in the home office. (I needed the support and assistance, and rather than getting on outside office, we decided to go all in!) She’s been with me ever since, occupying her own bit of space over on the other side of the room. She still is not in a cooperative mood when I decide that it might be a good time for some Led Zeppelin at 715am though! 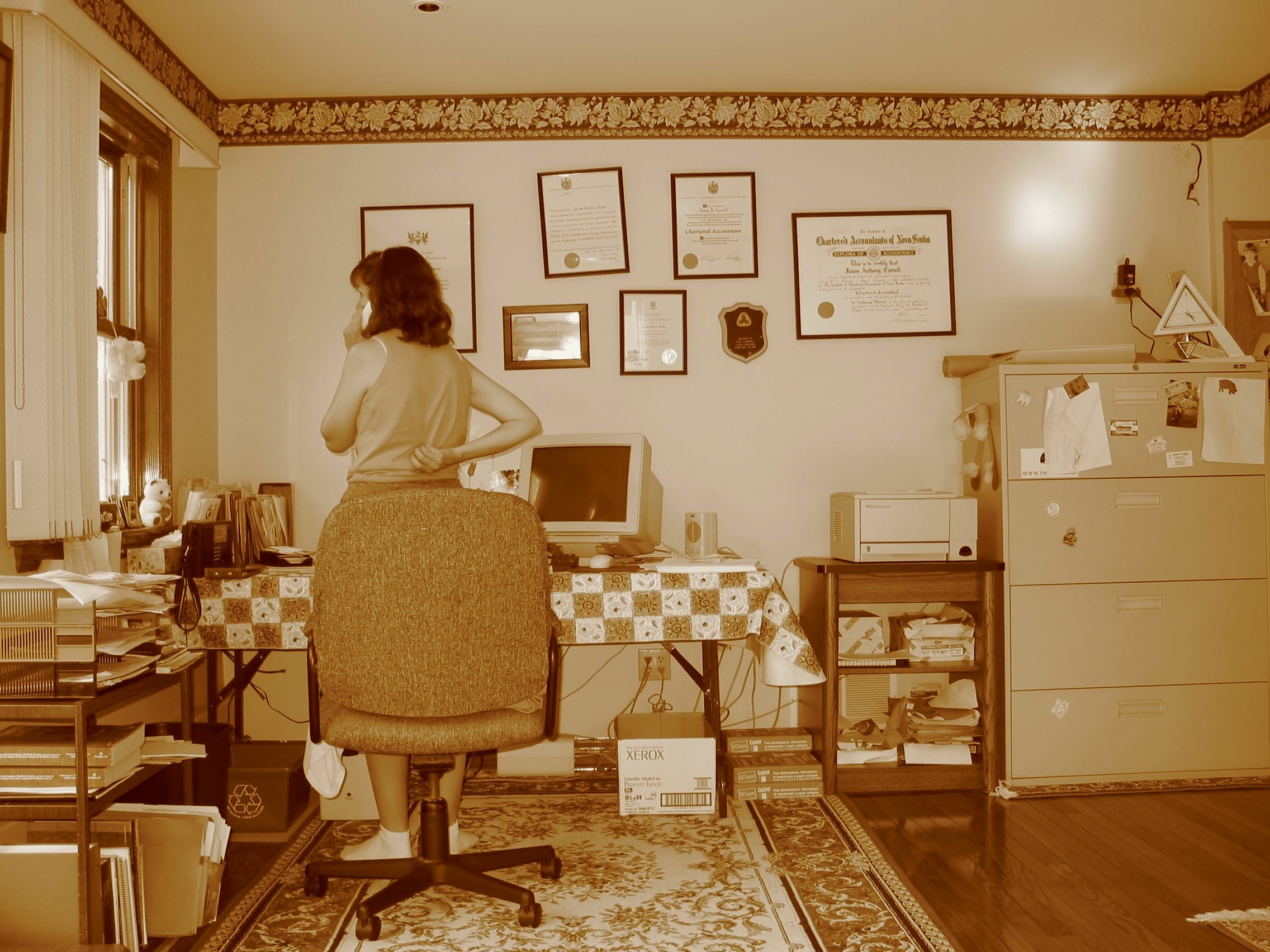 The boys soon discovered that daddy had some fascinating technology at his desk, and soon always did their best to commandeer it! Many of my days would see this type of scene as a computer game took over the office agenda! For years, my efforts to try to get something done would fail – with my attention being diverted by a different form of ‘office politics.’

Struggling through trying to pay attention to a conference cal? I’d get this bit of joyful energy wander in the room to say goodbye before heading off to school: Over time, as my career begin to take off, I lived a life that had TV crew after TV crew come to my home office to film some bit of insight about the future. For a few years, my sons would wake up in the morning to find a TV crew out in the hallway, setting up for some sort of news shoot. 30 years! And now, I’m even more all-in! when I can’t get to a stage, I decided to bring the stage into another room near the home office:

That’s why I find all the gnashing of teeth about the future of the workplace so interesting. Quite clearly, with Covid-19, much of the workforce has discovered the joy and beauty of what can come with a home office environment. Yes, many people do miss the interaction with their business counterparts.

But let’s face facts – I dare say many of them won’t want to go back to an office workspace any time soon. They’ve discovered the magic that has been a part of my life for the last 30 years.

Lessons learned? Check my post from 2003! 10 Rules for Working at Home!

10 Rules for Working at Home

With that in mind, it is clear that there is a seismic workplace attitude shift underway, and we would do best to understand it!