Daily Inspiration: “When everyone is suddenly going in the same direction, do a hard turn – and then floor it!”

“Be uniquely unique! When everyone is suddenly going in the same direction, do a hard turn – and then floor it!” – Futurist Jim Carroll 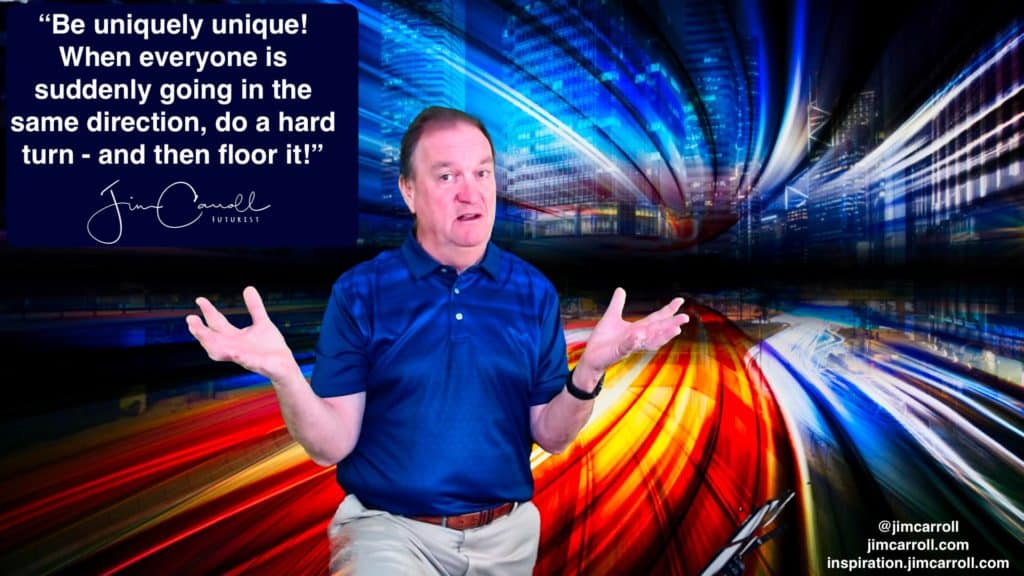 It’s an interesting time to be a speaker and a ‘thought leader.’ There are no audiences, little appetite for deep thinking, and precious little time for motivation. But with that, suddenly every speaker in the world has become ‘virtual,’ offering up the same type of online Webinar – with a standard headshot via Zoom.

The same thing happens regularly in the world of business – a shiny new toy emerges and everyone chases after it. Many business organizations base their strategy on the latest hype. Just a few years ago, that shiny new toy was chatbots; then it was blockchain; and another day, it was something else…

What do you do when everyone starts doing the same thing? Run away – in a different direction!

Early on in this thing, I too decided I too would have to explore the virtual world. I didn’t quite like it – I did quite a few for organizations like Microsoft and SAP back in 2005-06. I found them sterile; the lack of interaction demotivating; and I didn’t seem to be able to generate the energy we did on stage.

Then, a different world emerged all of a sudden. I have no idea if there is any type of future career opportunity left for me, but being stuck at home has a clear impact on focusing one’s mind.

I’m there! The online broadcast studio that I’ve built gives me something other speakers and thought leaders don’t have – a truly contextual, attention-grabbing series of vignettes that I can scroll through to keep the audience engaged, thinking, and aware. The result is that while everyone else is offering up the same type of Zoom broadcast with an entirely boring background – I’m doing something that I think is truly unique, full of relevant content, and visually compelling.

My week has suddenly changed as I focus my energies on gearing up for my Thursday broadcast!

There is some sort of lesson here – when everyone grabs a shiny new toy and you need to do the same thing – get a better toy! Change the rules of the game – or don’t play the same game at all! Invent your own game!