The paradox of optimism, manufacturing & the new “Build America” mindset!

One thing I love to do when I’m working with an audience is to build a totally interactive keynote with them.

It doesn’t matter if I’ve got 40 people in the room and I do some simple Q&A, or if I’ve got 2,000 in a cavernous Las Vegas conference hall.

In the latter case, I do a series of live text message polls – people use their cell phones and other mobile devices to give me a sense as to what they are thinking about the issues I’ve built into my talk.

Manufacturing Engineering Magazine just ran an article commenting on the live text message poll that I did during my keynote at the IMX 2011 – Interactive Manufacturing Exchange Conference – in Las Vegas last month.

This type of interaction matters — it helps me to shape my comments and the direction of my remarks to the mindset that exists in the room. Consider the comments, because this is significant:

Anyone who can text can take part in a real-time opinion poll. This was demonstrated at the imX keynote address of Jim Carroll, global futurist and trends and innovation expert (his billing). Carroll asked a basic question about how optimistic/pessimistic the authence was about the future of the economy, Authence response through texting was displayed on monitors in real-time as they “voted” with their fingers. The audience of manufacturers, their suppliers, and technologists who shape the future of manufacturing was more optimistic about the future than the headlines in any of our major media would lead one to believe they would be.

It goes without saying that that same manufacturing authence and our readers would have the best opinions about how to ensure that public policy- too often heid hostage by politicians- could best serve the interests of manufacturing. Policy should support and not hinder manufacturers in the successful use of all the resources available to them.

There’s a key issue that I’ve observed with manufacturing audiences through this type of live interaction that is quite worth mentioning — and that is that North American manufacturing executives tend to be far more optimistic about the state of the economic recovery then any other industry group I deal with.

This, despite the drumbeat of news negativity that continues around the sector. I asked the audience about this issue — whether the reality they saw matched what they saw in the media. The response was pretty overwhelming: 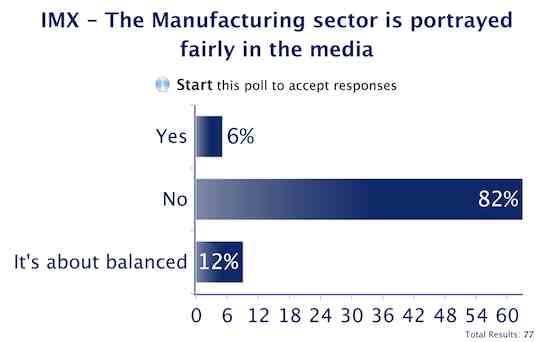 And there’s the paradox: everyone is convinced that manufacturing in America is dead – except for those who actually work within the sector.

I’ve never encountered a sector with such a degree of optimism about the future. And believe me, I deal with virtually every type of industry out there, and have been doing this type of live interactive polling on stage for over four years. I ask every single audience what they think is going on with the global economy. (You can watch me doing this when I opened the PGA – Professional Golfers Association of America — conference last year in Boston.)

At the IMX conference and at a previous keynote for a manufacturing group in Ohio, I was floored by the optimism in the room. I don’t see this mindset to exist anywhere else, to be quite honest, regardless of where I’m speaking in the world

And this mindset in manufacturing is confirmed by the number of forward looking inquiries and bookings that I have with various manufacturing groups and conferences going forward from here.

There’s a variety of attitudes at work, some of which I spoke at IMX in Las Vegas:

What it is really leading to is a fascinating new trend that I think is just bubbling below the surface, but that I suspect will be mainstream within the year — “Build America.”

There’s a realization and a push within the manufacturing sector that given this new mindset and the capabilities that emerged, with the emergence of challenges within the global supply chain (i.e. Japan and the tsunami), the impact of increasing Asian wage inflation (the Chinese cost advantage beings to erode); and the eventual arrival of reskilled, retained American workers who can work within the new sophistication of American manufacturing — that the time has come for the sector to grab the reins once again and show the world what can be done with American ingenuity and innovation.

It’s there — I can see it with my audiences — and it’s my projection that there is a real and significant mindset and trend here.