Home   >   Blog   >   The future of North American manufacturing? Brighter than you think!

The future of North American manufacturing? Brighter than you think!

I’ve just returned from Las Vegas, where I was the keynote speaker for a new manufacturing conference that has attracted quite a bit of attention – IMX 2011 – “The Interactive Manufacturing Experience.”

I was in esteemed company on the stage; the other two keynote speakers were Peter Schutz, author and retired CEO of Porsche AG, and President Barack Obama’s new “Chief Manufacturing Officer, Michael Molnar, who chose this conference to deliver his first public address.

I actually had two keynotes, starting out with a quick 20 minute talk at the Gala celebration dinner on the second day of the conference, an invitation only event with the CEO’s and senior management of some of the largest manufacturing based organizations worldwide. The next morning featured an opening keynote for Day 3, for about 400 manufacturing executives.

Let’s turn to the Gala. It was a celebratory dinner — and my goal came to be one of highlighing the transformative trends that are driving the manufacturing industry in North America forward and providing for future opportunity and potential rebirth of the sector.

Wait a moment, you might think! Isn’t this an industry that is dying by degrees? Certainly the media spin is that manufacturing in North America might be all but over!

Consider, for example, a headline that ran in the Huffington Post just a few days before my talk: 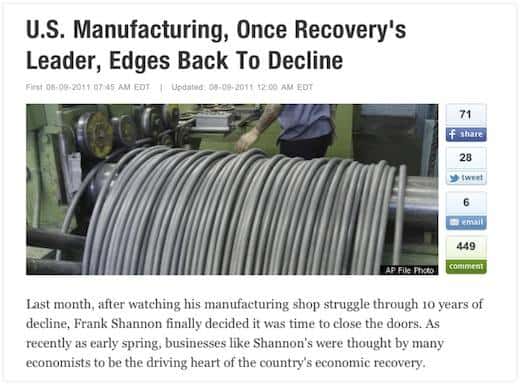 The article goes on to note that August saw a net loss of “3,000 jobs” — and that perhaps this is a sign of the yet continuing decline of the industry.

My first bit of advice to the audience. Knowing that economic volatility is the new normal, they should tune out the day to day media noise, and focus on the fact that there is a significant reinvention and transformation of the manufacturing sector that is well underway!

Given that, what’s the mindset of some of the leading manufacturing based organizations from throughout North America. On the stage, i summoned up a quick text message poll: and in a matter of two minutes, had a good summary of the belief in the room that an economic recovery was well underway: 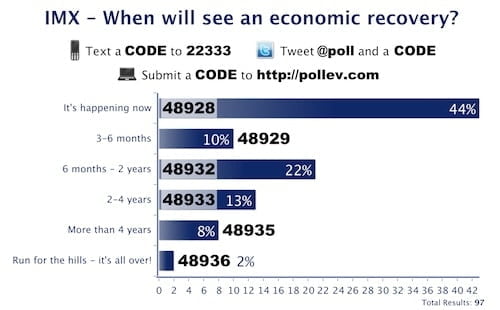 This echoes the experience I had earlier this year when I keynoted Techsolve 2011, a meeting of leading manufacturers in the state of Ohio (Read: “Report from the Heartland: Is There Life in Manufacturing in Ohio?” You Bet!“) — who also responded in resounding fashion that they believe the economic recovery is happening now.

So what’s going on in the world of manufacturing that’s “right” and that will allow organizations to seize advantage of opportunity in the future.

Many things which I began to cover off in my keynote. Read these points and check the related posts, since it will help to clarify each point where necessary. 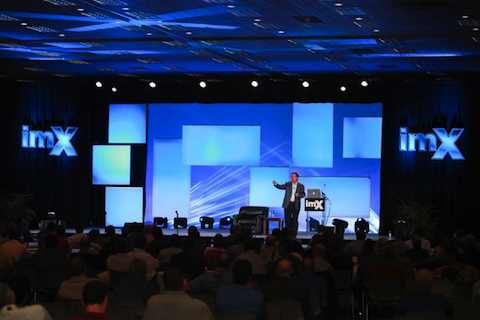 Agility: I wrote a story into an article a few years back — actually, about 2004. It’s self explanatory on the agility theme:

I recently spent time with the CIO of a US-based patio furniture manufacturer. His organization was hammered in the last decade by countless factors, including the fact that a Chinese manufacturer could provide a similar product for a much lower price.

He convinced his leadership team that it needed a financial management system that would permit it to run leaner, faster and with more insight into operations. The company spent a whack of money on it and suffered greatly with the challenges that came with implementation.

Then one day, it reaped the rewards of a financial management insight system. Last winter, it had a call from Wal-Mart, asking if it might supply 110,000 patio swings; Wal-Mart was unable to source the product from its usual Chinese supplier. With the analytical tools the organization had put in place it was able to look up and down the supply chain to ensure supplies could be immediately sourced. In an instant, it was able to analyse the numbers and determine a price bid it could live with. It examined its resources and changed the production schedule to fit things in. The company was able to go to production two weeks later, delivering the product in advance of the order date, and on budget.

The company had the agility necessary to respond to a world of rapid change — and serve as a perfect case study of what we can really do when we focus on the benefits that sophisticated accounting insight can bring.

There’s a tremendous amount of focus on agility today, and it is one of the key trends that is driving the transformation of the sector.

Flexibility: I often compare the “old” business model of “building to inventory” to the new business model of building to demand. Read my blog post, in which I compared the approach of Ford, vs that of Honda. (“The new face of manufacturing: agility, insight and execution“. ) There’s also YouTube video you can watch – “Innovators focus on corporate agility.” I’m that video I’m actually on stage for 3,000 people for a global food company — in the exact same conference room at the Bellagio hotel a few years previous to the IMX event! Another key concept is that of “chameleon revenue” — success comes from the ability to generate new streams of revenue that haven’t existed before. Read “Innovation and the concept of chameleon revenue” for insight into what is happening here.

Post-flat strategies: smart companies avoid the complications of the “flat-world” by changing the rules of the game. Take a look at “What do you do after the world gets flat? Put a ripple in it!” in which I outline the attributes that I’ve seen successful manufacturing organizations make. And for more enthusiasm, read a 2008 post, “Is there hope for manufacturing?” which continues with the theme.

Faster time to market: tools have emerged that permit rapid industrial design: rapid concept generation, rapid concept development, and rapid prototyping.  We’ve got the capable for physical plant modelling, virtual commissioning, process simulation, analysis of factory flow in a virtual tool pre-design — all kinds of new capabilities. Quite simply, organizations that upgrade their skills and capabilities with these new tools are discovering the very real pathway to agility and flexibility.

Arrival of the digital natives: The speed with which the new methodologies is being adopted is increasing due to the arrival of a new generation of tech-savvy, innovation-oriented, open-minded individuals who are fully ready and willing to exploit and take advantage of every digital tool, methodology and capability to expand the capabilities of the manufacturing sector to respond to the demands of todays new, fast paced world.

The tinkering economy. Spend some time at MakerBot, Ponoko (which bills itself as “your personal factory….” or similar sites, and you’ll discover an entire global collaborative culture that is sharing ideas and insight on how to “build the next thing.” This “tinkering mindset” is going to influence manufacturing, for it is drawing in the skills and interest of this next generation, and also their unique way of thinking about the world. Read the article “Tinkering Makes a Comeback Amid Crisis” and you’ll get a sense of the fascinating things that are underway — and project this trend into its impact on manufacturing.

The inevitability of mass customization: Of course, one way of avoiding a “flat-world” is by premium pricing your product — and you can do that by establishing a market of one. Mass customization has been around a long time, and there are a number of successful examples. Yet the arrival of the digital natives is going to speed up this trend, helping to lead to a  resurgence of manufacturing.

New business model exploration: at the same time, they’re also busy exploring new methods of reaching out to consumers, raising equity funds, or collaborating on fascinating new projects. Sites like KickStarter.com are going to have a profound impact on manufacturing — for a really innovative story, take a look at the TikTok and LunaTik Multi Touch Watch Kits and the story behind their development.

Pervasive connectivity and intelligent assembly: the definitive trend for the next decade, in which “everything plugs into everything else.” Quite simply, we have a lot of opportunity to reinvent the future with transformative technology, because we will know three things about every device on the planet — including those that include the manufacturing process — their location, their status, and their Internet address. This is going to permit a STUNNING level of rethinking of assembly lines, manufacturing process and methodology, cost efficiency, and all kinds of other fascinating new opportunities. Not only that, but it leads to the opportunity to manufacture new intelligent devices for use in the areas of energy, health care, or just about anything else.

Transformation change: I’ve barely scratched the surface of what is yet to come. One of the most fascinating developments, well underway in the move from the conceptual to the practical stage, involves the use of “3D printers” and the inevitable shift to “additive manufacturing” from “subtractive manufacturing based on cutting, drilling and bashing metal…” There’s a good article on recent developments at MIT . Noted the Observer newspaper in a recent article: “Just as Bill Gates wanted to put a computer in every home …. all of us will eventually own a 3D printer. The key will be making them affordable.”

Here’s what it comes down to : there are a lot of negative trends happening with North American manufacturing. But as shown at IMX, there are also a lot of trends that are providing for transformative change and opportunity.

I closed my keynote with the observation that “some people see a trend and see a threat. Innovators see the same trend and see nothing but opportunity.” So it is in the world of manufacturing.