The folks at PollEverywhere — the service that I use to conduct live text message polling while on stage — have just run an interview with me over on their blog as to how I utilize the tool.

I’m reposting it here since it does provide a good overview of just how wonderful and interactive their service is.

Jim Carroll is recognized as one of the world’s leading international futurist, trends & innovation experts — and he’s got the client list to prove it, having provided his insight to such organizations as NASA; Lockheed Martin; National Australian Bank; Pfizer; Diners Club; HJ Heinz; and PPG.

And he’s a raving fan of Poll Everywhere — using the service in a huge range of global Fortune 1000 and other organizations as well as countless association events, such as being the opening keynote speaker for 4,000 people at the annual National Recreation and Parks Association annual conference in Salt Lake City.

“I’ve been using [Poll Everywhere] on stage as part of my keynote for at least two years, and the service has truly helped in building a live, rich interactive experience with my audience. I’ve used it in small CEO-level sessions with just 20 people and in large-scale Las Vegas events where you’ve got to be a top-notch performer to keep a crowd engaged – particularly if they are in rough shape after a night out on the town!”

One of Jim’s most thrilling moments came when he found himself on stage in front of 500 golf pros for the 94th Annual General Meeting of the Professional Golfers Association of America. “The management team at PGA invited me in to speak to their members on the need for innovative thinking. They never had an outside speaker in before, in their entire history. And so starting out by having them pull out their cell phones in order to gauge some of their opinions about change, the future, and challenges facing the game — it certainly made them think! The reaction was powerful and pretty astounding because I was able to quickly shape my talk to respond to their concerns.”

While Jim can speak to audiences of 7,000 in Las Vegas or Orlando, he recently found himself on stage in front of 250 kids at his son’s high school. “My son knows that I’ve had a strange job for the last 20 years – flying around all over the world to speak at events — and his teachers thought it would be great if I could come in and talk about the future of their careers.”

Jim’s opening comments, as found in his blog post “What happens when high school students are told to text” (/2011/04/what-happens-when-high-school-students-are-told-to-text) captures the fascinating dynamics that occur on the big screen when PollEverywhere grabs the minds and attention of the ultimately wired generation. “That was a pretty cool moment,” says Jim. “And it really should get anyone thinking about the future of education, corporate and association meetings, and conferences.” 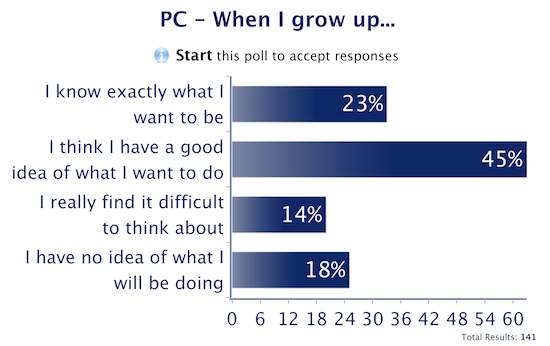 Jim’s method of audience interaction has proven to be a big selling point with his client base —  so much so that he devotes a Web page to what he does. /keynotes-workshops/interaction-from-the-stage

Not only that, but his blog offers a sometimes fascinating look into his client base – consider the opinions offered up by a group of manufacturers from Ohio: “Report from the heartland: Is there life in manufacturing in Ohio? You bet!” /2011/02/report-from-the-heartland-is-there-life-in-…

“People want to interact and be engaged with a speaker. This tool lets me reach out to their minds and hearts, and make them immediately part of the talk. And it has certainly provided me with a very unique tool in getting across some of the key trends which are impacting the future and opportunity for innovation.”