Home   >   About Jim Carroll   >   Report on a Keynote – The Future of Skills, Recruitment, the Workforce and the Organization!

Report on a Keynote – The Future of Skills, Recruitment, the Workforce and the Organization!

It was so fantastic to get back on stage with an event in Belgium – where I transitioned from a hidden re-creation of my basement green-screen studio to a live performance. Here’s a brief shot! 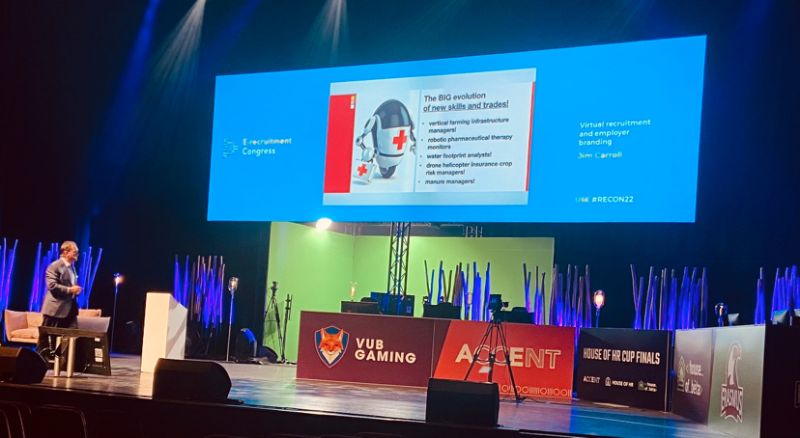 There’s been a fair bit of media coverage around my talk – it seems to have hit a mark. The article below really hits upon my key themes.

YOU need to think about your future, and how YOU become your own futurist!

Renowned futurist Jim Carroll knows a fair bit about trends and innovation. During the E-Recruitment Congress in Belgium, he delved into why recruiters need to become futurists.

Few people get into as many interesting places as futurist Jim Carroll. The Ontario, Canada-native has made a living advising companies such as Disney, Nikon, Volvo, Pfizer — and many others — on anything related to trends and innovation. His keynotes tend to be an experience. He joined the 2022 edition of the E-recruitment Congress from his remote video studio, built into the basement of his house, he started by speaking about all the changes that have occurred during the past pandemic-filled years.

“COVID has accelerated the speed of change. Mainly virtual change.”

“You simply couldn’t get away from virtual”, he said as his green screen enabled him to visibly appear from New York City and a Belgian beach. “These past years have completely changed our relationship with the world, employees, and employers. I’ve spent a lot of time on a lot of stages around the world outlining what happens in the world where we need to think big, start small and scale fast. But COVID has accelerated the speed of change. Mainly virtual change”, Carroll said, as he traveled back to his virtual studio.

Then the curtains unravelled from the stage in Ostend, Belgium. Several green-screens appeared out of the darkness. There he stood: Jim Carroll.

Then the curtains unraveled from the stage in Ostend, Belgium. Several green screens appeared out of the darkness. There he stood: Jim Carroll. Not from his house in Canada — but on the actual stage. Proving to an audience of recruiters and talent leaders, who had initially perhaps felt disappointed Carroll wasn’t there physically, that technology has changed fast.

“In case you didn’t realize, the world is now a fundamentally different place”, Carroll continued. “We’re in a situation where companies that not yet exist will build products not yet conceived, using materials not yet invented. How are you going to recruit people for that reality? The future is that I can’t keep up with the change of trends. Science-fiction ideas are real before you realize it. In 2020, in as little as 6 months, we saw 10 years’ worth of change.”

“How are you going to be an employer of choice if you don’t have the digital presence?”

“A lot of the excuses disappeared when COVID struck”, Carroll said. “Because ‘get it done’ became the rallying cry. Now the future belongs to those who are even faster due to digital transformation. You all thought I was in Canada. The way we present ourselves to the world, the image we put out there, matters. But how are you going to be an employer of choice if you don’t have a digital presence? How can you attract a generation that is completely digital in everything they do?”

Your boss thinks you have no long-term vision if you don’t turn your camera on during Zoom meetings.”

It is all part of what Carroll sees a greater digital good. “Your boss thinks you have no long-term vision if you don’t turn your camera on during Zoom meetings”, he said. “They think if you’re not engaged virtually, then you’re not a good employee. That’s why digital presence matters. You need to show digital professionalism. I always use the same mantra: think big, start small and scale fast.”

Many recruiters currently live in the reality that has been dubbed The Great Resignation, The Great Re-Shuffle — or something else that has been less than great for getting people into jobs. “It’s nothing new”, Carroll said. “COVID simply accelerated a trend that was already taking place. The future happens slowly, and then all at once. You need to be prepared for that. Change is happening so quickly, that you need to recruit people for jobs you don’t yet know exist. You need to be prepared for that reality yesterday.” 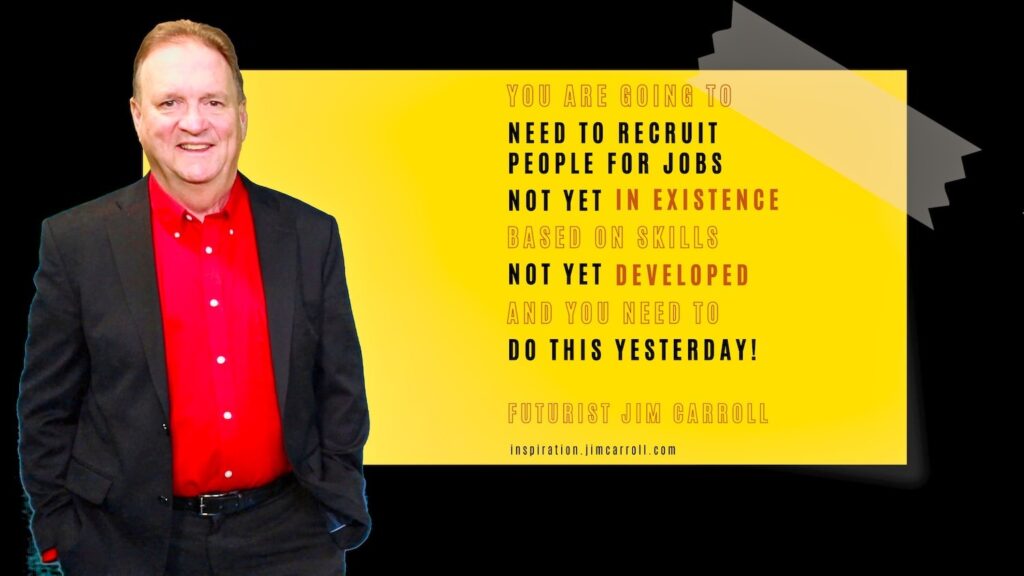 “Change is happening so quickly, you need to recruit people for jobs you don’t yet know exist.”

“You need to become futurists”, Carroll continued. “You need to learn how to predict the future when it comes to rapid knowledge obsolescence and rapid knowledge emergence. To put it into context: the medical knowledge used to double every eight years; that number is now down to 78 days. You need to deliver knowledge for people who don’t yet know they need that knowledge.”

“Careers are disappearing and new ones are popping up. How will you recruit for those jobs?”

Whether you’ll source for virtual farming infrastructure managers, robotic pharmaceutical therapy monitors, water footprint analysts, or drone helicopter insurance crop risk managers — you need what Carroll calls ‘just-in-time knowledge’. “We’re amidst a big evolution of new skills and trades. Careers are disappearing and new ones are popping up. How will you recruit for those jobs?”

But as scarcity persists, recruiters are still chasing those they need to recruit. Therein lies another lesson, according to Carroll: they may simply not want to be recruiters. “I’m 63, and my generation defines itself based on what we do for a living. When I asked a 22-year-old snowboarder kid why he wasn’t interested in a job opportunity, he gave me a simple answer: ‘Because you’re messing with my powder, dude.’ The fact is: they don’t define themselves by their job, they define themselves in what they like to do.”

“I’m 63, and my generation defines itself based on what we do for a living.”

In that context, everything is transactional, Carroll said. “They will simply move to any position that will give them a better monetary reward. Many of them are already thinking of a new job on their very first day. More and more see the added value of self-employment. Moreover, they think 2 to 5 years in an organization is a long-term career. Does someone give them a better offer? They’re gone…”

“They don’t care about the name of the company. They want to enjoy what they do.”

So where does employer branding fit in, according to Carroll? “Your corporate brand has had to change and evolve in recent years. You could call your organization‘ digital’ and ‘hybrid’, but when you want everyone back in the office, you’re not digital, or hybrid. From that point-of-view, they don’t care about the name of the company. They want to enjoy what they do. If they’re on TikTok, go create short, sharp shots of insight there. A digital presence is everything.”

‘They don’t want to go back to the office’

As leadership discussions take place about adopting full-time remote, hybrid, or just back-to-the-office models, Carroll sees a fundamental shift in what the younger generation wants. “They have no desire to go back into the office because they’ve tasted freedom. They have no desire to be part of the traditional workforce. We have leaders who want us to go back to 2019. That is just not going to happen.”

“The younger generation has no desire to go back into the office because they’ve tasted freedom.”

“I think the final result will have to be some type of hybrid in lieu of the workback pushback”, Carroll continued. “I think the truth is found in the snowboarder, who gets up every morning and goes for a run. Then puts in four solid hours, goes for a walk during the afternoon — and puts in another solid three hours. That’s the new reality. Meetings and events can be used as corporate team-building exercises, but the corporate culture will have changed — and evolved.”

“It’s all about contract work, part-time relationships, and external partnerships. This is not a new trend.”

In conclusion, Carroll recalls being stunned when he read a New York Times article in 1987, which predicted a future wherein organizations would become smaller and become something fundamentally different. “Fast forward to today’s economy: organizations are going to go forward with a smaller employee footprint”, Carroll continued. “They’re expanding and contracting as necessary. It’s all about contract work, part-time relationships, and external partnerships. This is not a new trend.”