Daily Inspiration: “Your biggest opportunities might actually come from simply going around the smallest of barriers!”

“Your biggest opportunities might actually come from simply going around the smallest of barriers!” – Futurist Jim Carroll 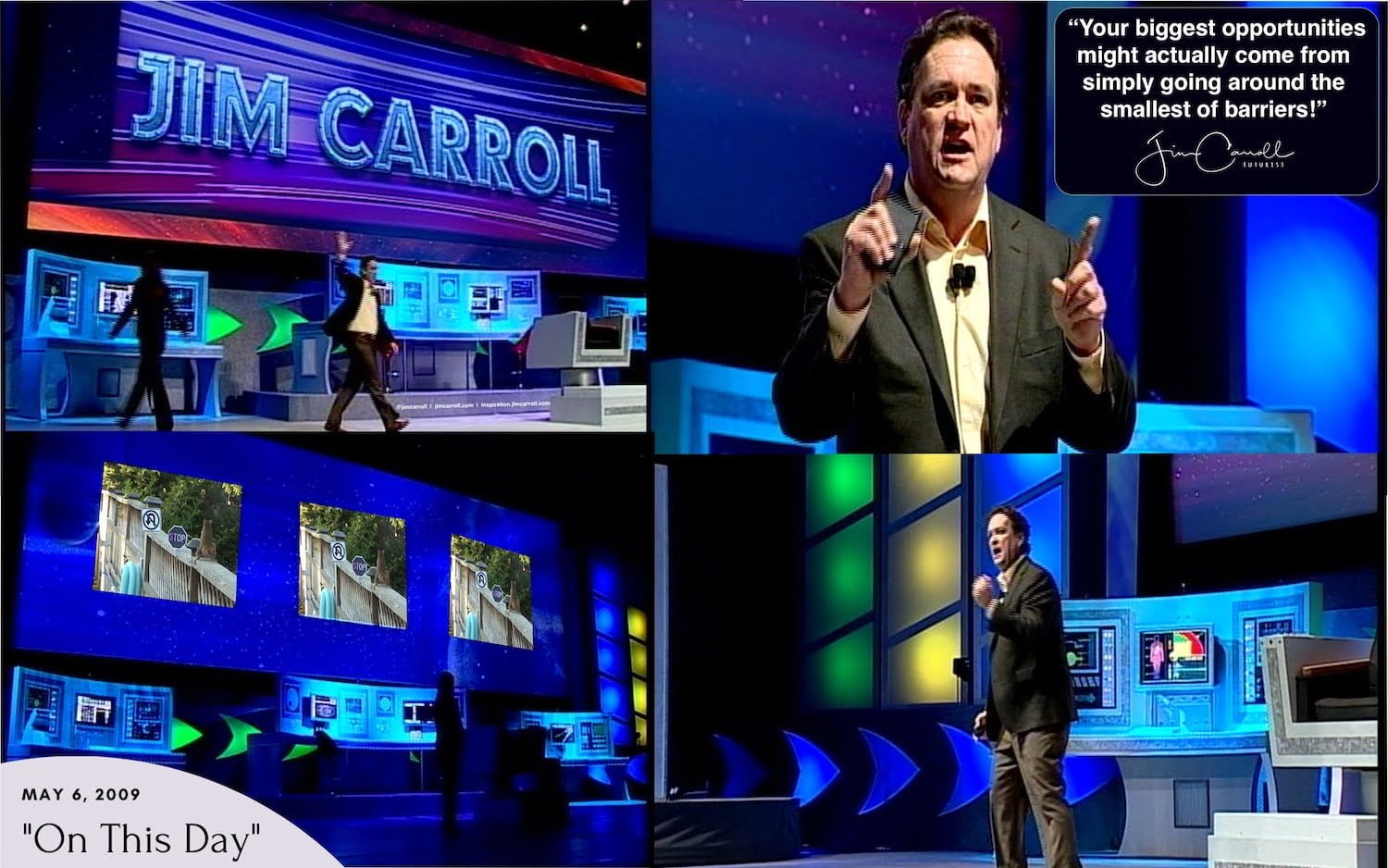 This is one hell of a story about my biggest stage performance of my life (so far), and how it all started with a squirrel! To a degree, I can attribute my success on the global speaking circuit to a little video clip that my sons and I filmed in 2006. This little guy. Watch it!

We were bored, late summer in 2006, and I decided to work with them on a fun little project. It caught some attention – you can still find it on Youtube. 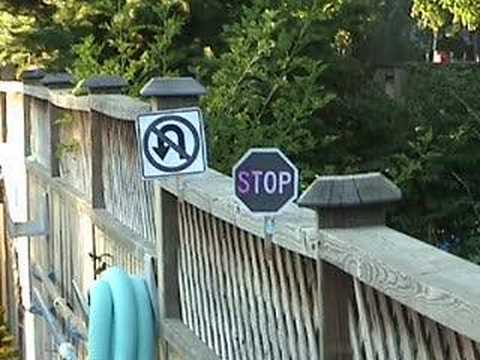 Fast forward to 2009. I’d been on the speaker circuit for close to 15 years, and had enjoyed some remarkable success. It was about to get WAY better, and it all started with my keynote for the Burger King global franchise conference in Las Vegas in a massive auditorium that opened with …. my squirrel!

Context: at that time, the CEO of Burger King realizes that this thing called “social media” is going to have a pretty profound impact on how the organization would engage with its customers. All the signs were that this was a pretty seismic shift. With the global franchise meeting coming up in Las Vegas, he set his team off to find someone who could help to get across to 7,500 franchise owners that their world was about to undergo a dramatic shift.

One of the senior executives had just happened to see my little squirrel video: “Change – Deal with It” They liked the message – there are barriers – but simply get around them! I was shortlisted.

There were other issues on the table – Burger King knew that restaurants needed to invest in new infrastructure, a remodeling of tired premises, and other factors. (Apparently, a healthier menu wasn’t on the table, LOL!). “Change – deal with it!” They seemed to cling to that mindset – and via the squirrel video, found me, and watched some clips where I’m on stage, talking about change, disruption, innovation – and social media.

“Get that guy!” went the rallying cry.

And so I became the opening keynote speaker for the 2009 Burger King Global Franchise Conference, with an audience of 7,500 people in the room, at the Center for the Performing Arts in Las Vegas. The previous week on that very stage? The Miss America Pageant!

From there, it’s a helluva story, including what happened with my little squirrel. Follow on.

Stage check was early – 6 am – but I was on Toronto time, having arrived the night before, so that was ok. I made my way through the casino – Planet Hollywood — and my name … was …. on signs …. all ….. through…..the casino. Weird. 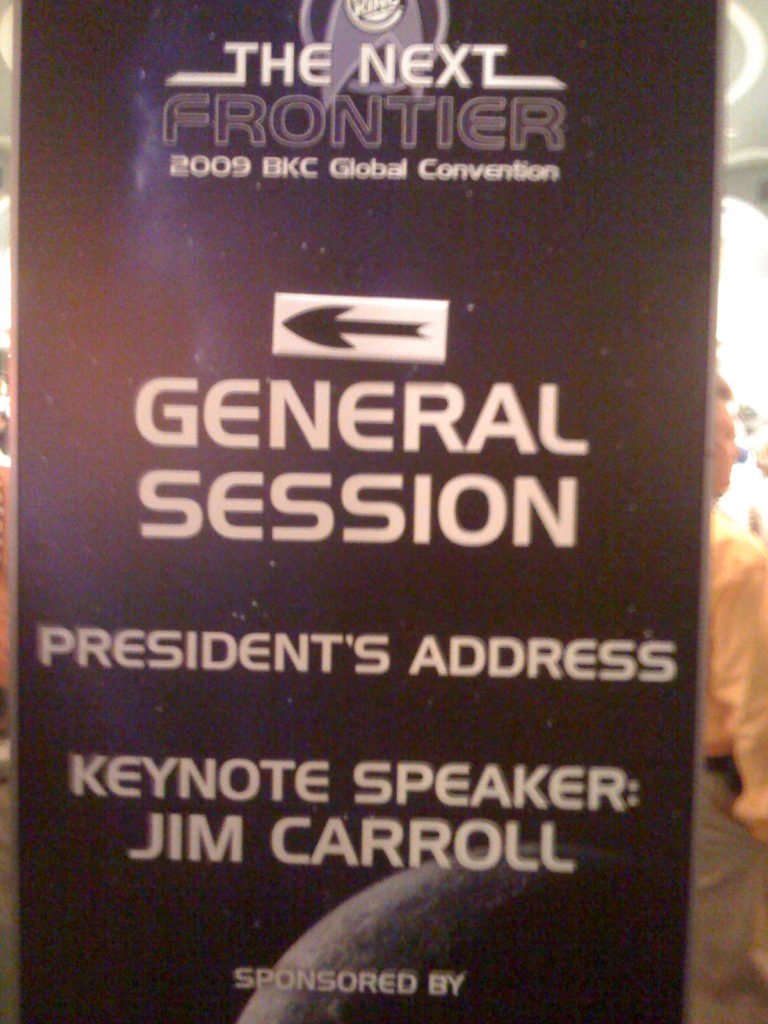 I then walked into the theater where my keynote would be and was a little stunned by what I saw. They literally had built the bridge of the Enterprise. All I had was a Blackberry with a poor quality camera, but this is what I saw as I approached the stage. 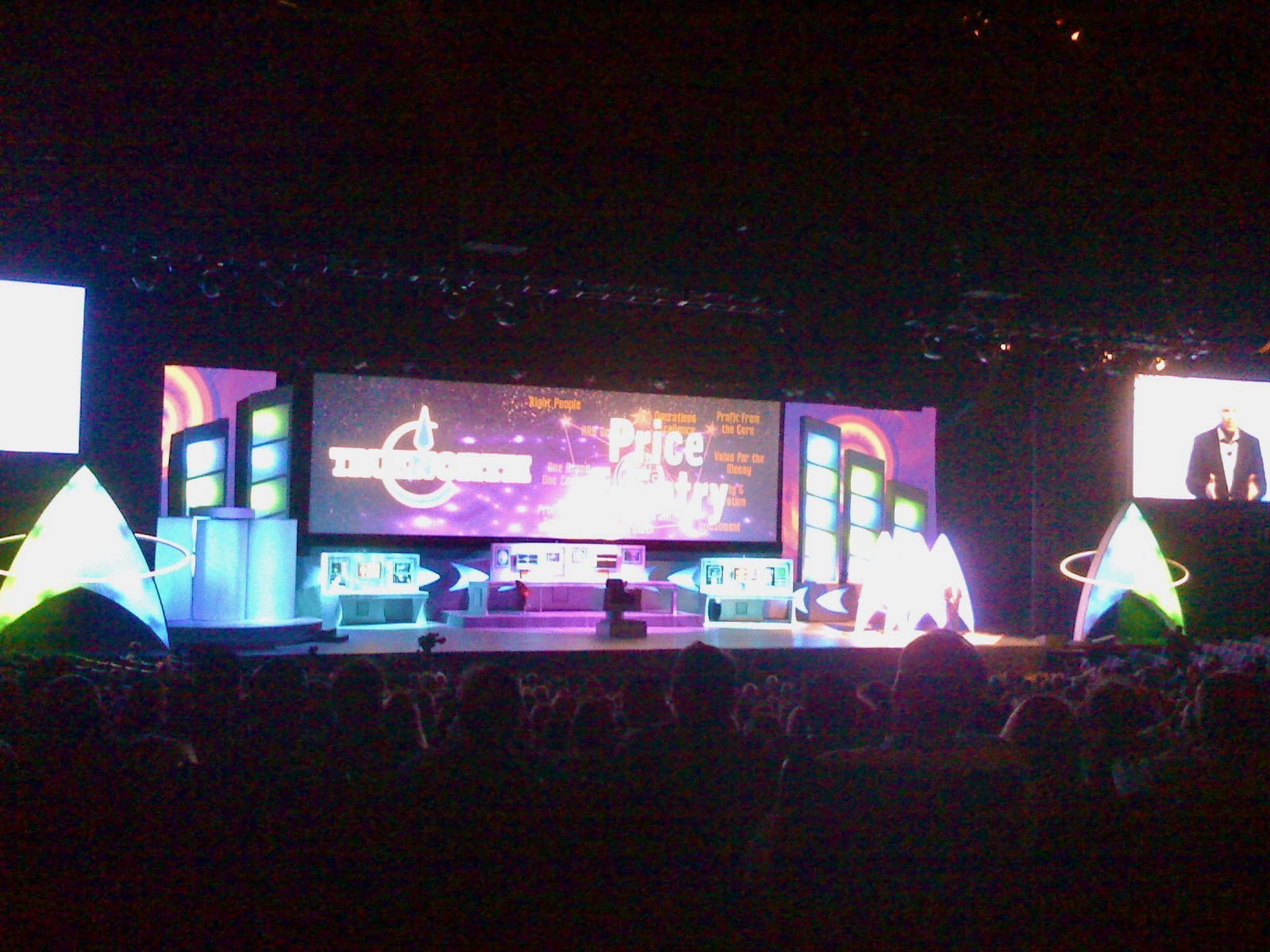 It turned I was sharing the stage with Spock – Leonard Nimoy! Burger King was just about to launch as the lead sponsor for the next Star Trek movie – and wanted to brand the event around that theme. So … they literally built the bridge of the Enterprise. This would be my home for my work that day. This….stage….. 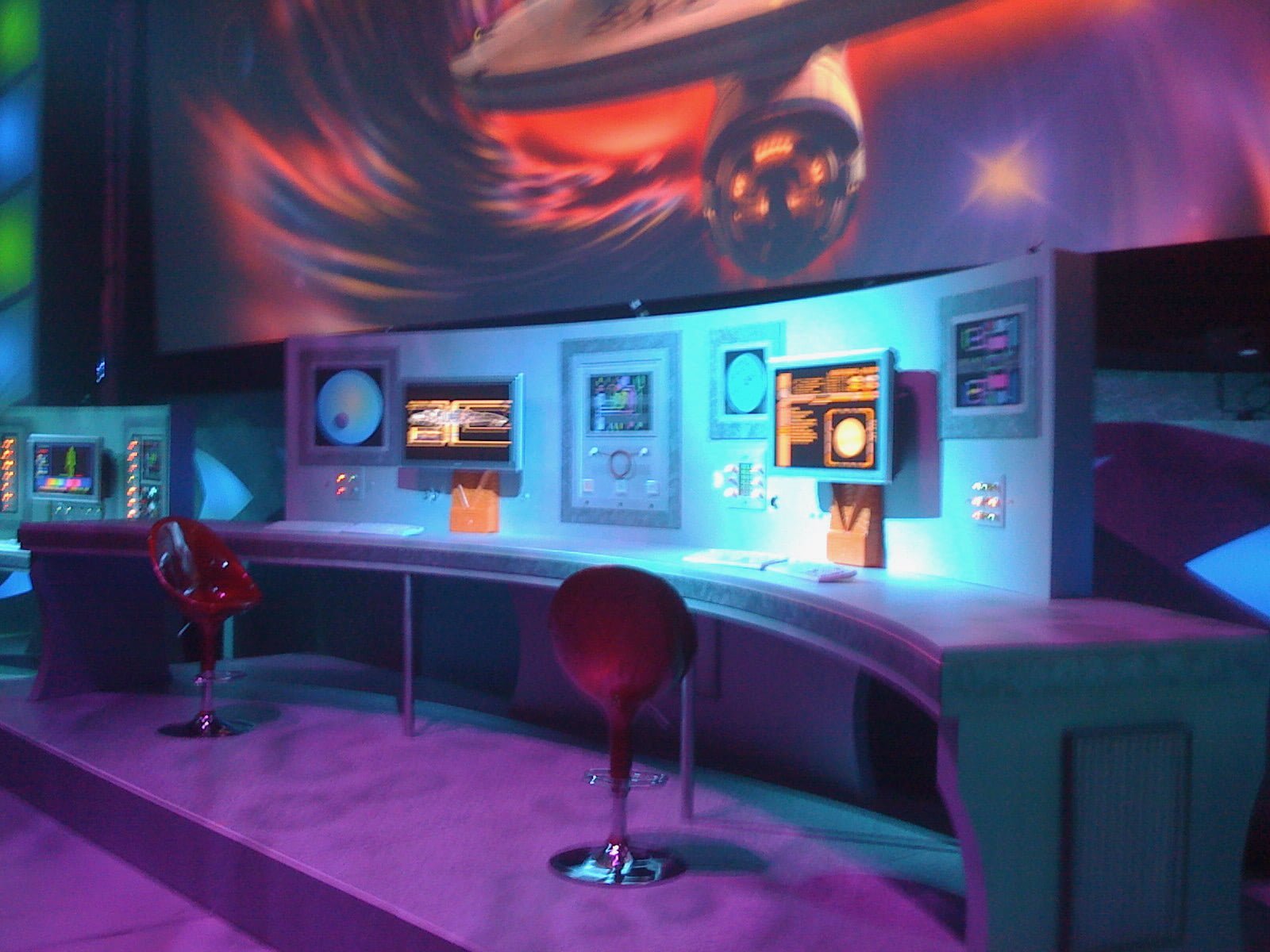 Whoah! I then wandered backstage to introduce myself – there must have been 50 people back there. I even had a make-up artist! To do my face! The view backstage as they tested out some of the projected screens….. 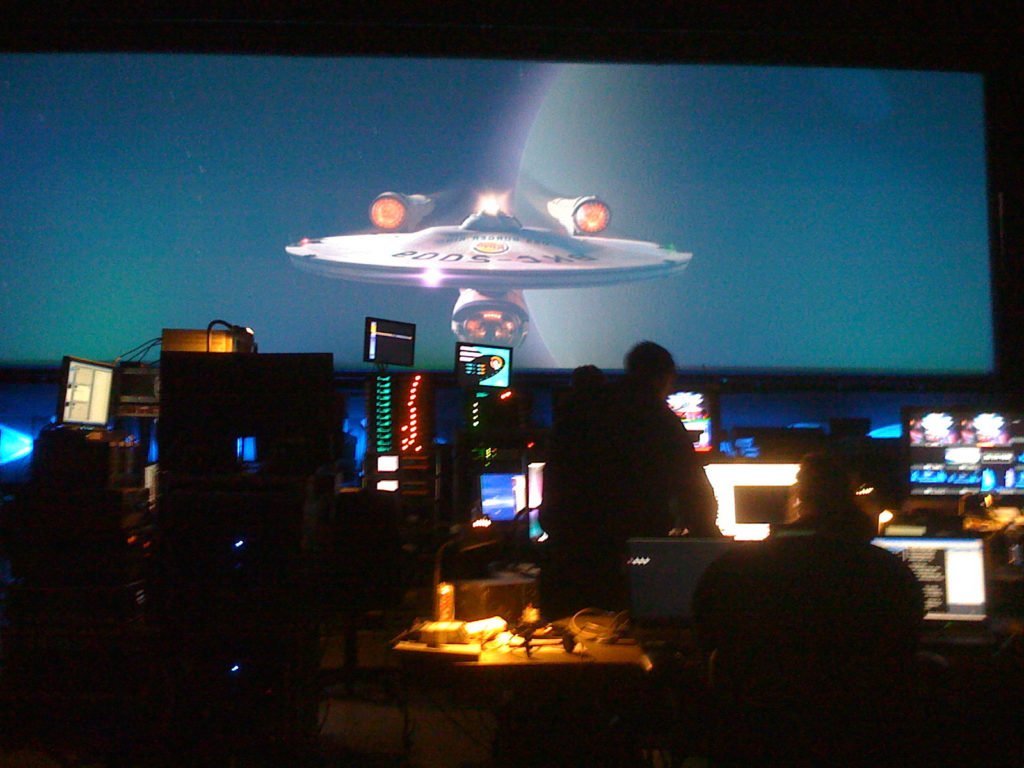 And that morning, I walked out on stage, in front of the biggest audience of my career, and delivered the performance of my life!

But in the introductory moments, it was even more fun!

My little squirrel video made it onto the stage to open my theme and as part of my introduction, as they wanted to focus on this message of change – get around the barriers.

Because we only had a rather low-resolution version, they split it across the screen. Here’s the long version, and the short version. Watch how a senior executive introduced me – and my little squirrel friend – as a metaphor for dealing with change.

Short version! Right here! My little squirrel is on a massive stage in Vegas!

And so I walked out on stage and delivered the performance of a lifetime. I still get goosebumps on occasion.

I was on fire with my message, hitting all my themes of innovation, disruption, social media, branding, the future of marketing, and more. All the work I had done for the previous 15 years – playing the clubs, working small halls, standing on risers with a podium, led to the biggest stage performance of my life

I nailed it. And because I had a such great video, that became the launchpad for countless future gigs – on stages all over the world, for massive organizations like NASA …. and all because of a little squirrel!