Home   >   Blog   >   Daily Inspiration: “It’s better to be ready for an uncertain future than to be caught standing still!”

Daily Inspiration: “It’s better to be ready for an uncertain future than to be caught standing still!”

“It’s better to be ready for an uncertain future than to be caught standing still!” – Futurist Jim Carroll 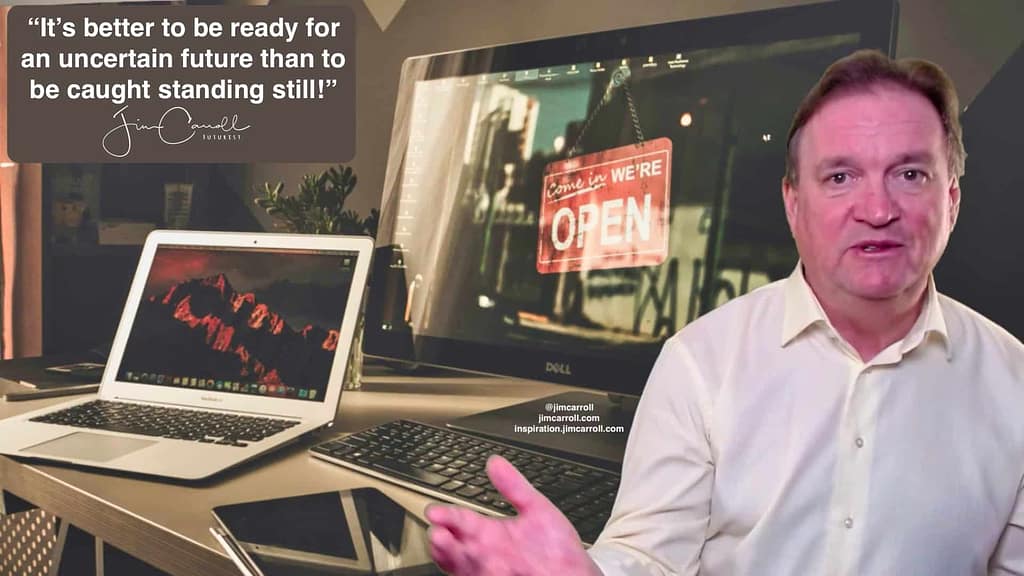 It’s pretty certain that there won’t be a lot of demand for a futurist for a time – people simply want to get through today!And the idea of gaining insight to build an innovative team is almost laughable at this very moment, when companies are having to struggle to stay alive.

It’s pretty clear to me that, like everyone else, face an unknown and fuzzy future. I realized early on that I would most likely have an extended period of downtime, and that fact itself takes a lot of emotional management.

But what do you do when you are facing increasing irrelevance?

Try to reinvent your relevance!

That’s why I’ve spent so much time putting together short video clips since this thing began – 2 or 3 per day! It’s part of a process in which I’m doing what I know best – sharing my insight and perspective – even if I know that there are not a lot of people seeking that insight right now.

And every message of thanks and support that I get from someone who sees these posts arrives like a burning arrow of joy.

More important, the process has helped me to build up the sophistication of my online broadcast studio offerings. My overseas producer Armine Simoyan and I have spent the last few weeks working on a summary video that outline what I can do from the stdio, and it’s a pretty impressive list.

Give it a watch at https://online.jimcarroll.com

The fact is, when the world is ready and companies are starting to move on to the next phase – recovery and rebuilding – I’ll be ready with online talks, pre-taped professionally produced video leadership series and more.

But I do know that I won’t sit around and let an increasing, and hopefully, temporary irrelevance become a relevant fact in my future!