Daily Inspiration: “…”clinging to your legacy like the drowning seize a life preserver is not a strategy – it’s desperation!”

“When the disruptors are all circling around you like sharks in the water, clinging to your legacy like the drowning seize a life preserver is not a strategy – it’s desperation!” – Futurist Jim Carroll 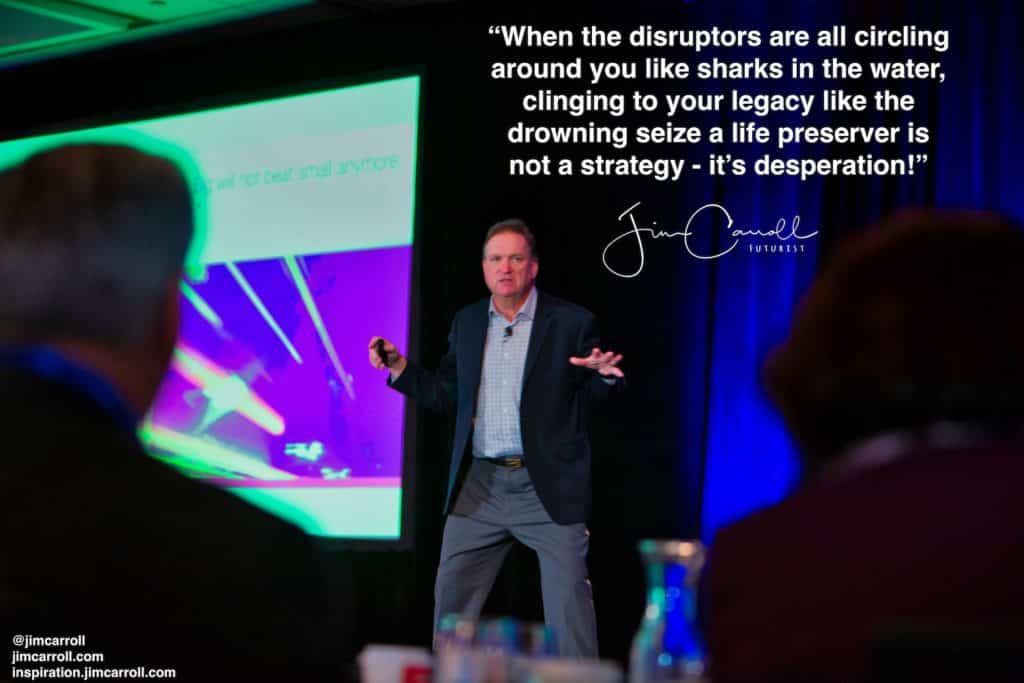 This photo is from my keynote in Stamford, CT, for the HMG Strategy Group CIO Summit last week.

The entire talk was built on my theme, “What Do World Class Innovators Do That Others Don’t Do.” That’s the compendium of insight that I’ve built up through 25 years on stage, observing what some organizations are doing to win in the high velocity economy while others have seemed doomed to fail (and many have).

One thing world class innovators definitely don’t do is cling to their legacy as a useful strategy for going forward. They know that their past success is no guarantee for surviving and thriving with what comes next.

In fact, they know that legacy can be toxic.

Certain things about the future are certain: it’s going to twist and turn, throw you unexpected curveballs, and show up with a series of continual surprises. It’s relentless in its ability to confuse, dogged in its determination to challenge you, and in the era of acceleration, will require that you change faster than ever before.

That’s why clinging to your legacy is a guaranteed recipe for failure, not a strategy for success.

That’s because business model disruptors ride the uncertainty of the future, making big bets on what they hope might be, not what is. Some of them will succeed while others will fail. But they are out there circling around you, looking for signs of weakness.

And at the first sight of blood in the water, they’ll attack with a vengeance. What good is your legacy at that point in time?

What do world class innovators do when confronted with disruptive reality?

As I write in my list, “They know that right now is a great time to made bold decisions, and to take decisive advantage to forge aggressive new paths against their competitors.”

They aren’t focused on avoiding drowning with a life preserver – they’ve already found a bigger boat!