Daily Inspiration: “You might decide to try to fight the future – but do it knowing that it won’t be a fair fight!”

“You might decide to try to fight the future – but do it knowing that it won’t be a fair fight!” – Futurist Jim Carroll 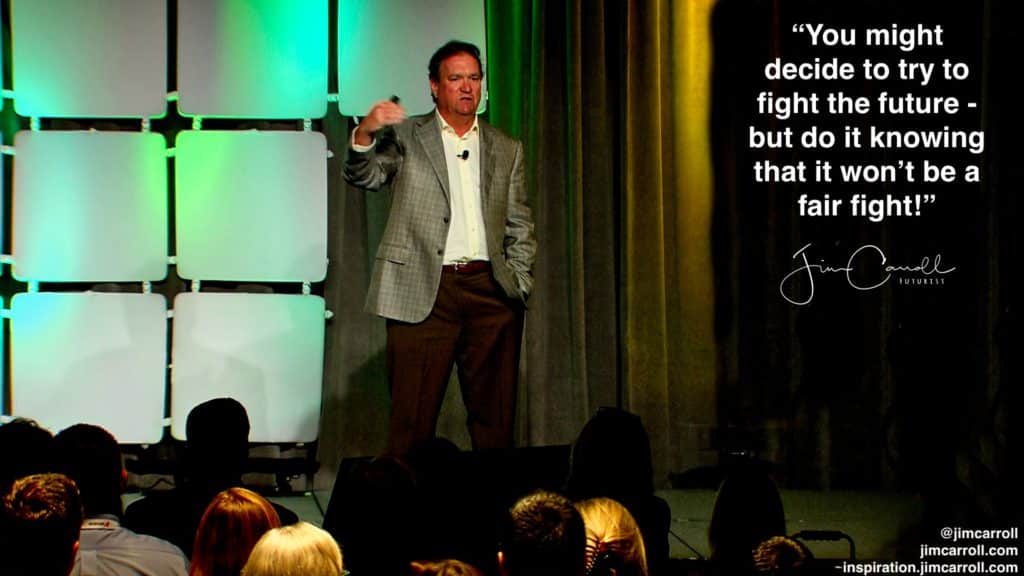 My post the other day about the inevitability of business model disruption caught the attention of one reader, who wrote me with a story of what is happening in the particular industry in which he works.

He’s witnessing the very thing I wrote about – an industry fighting back against a massive disruptive trend driven by accelerating technology, new ideas and challenges to existing ways of doing business.

Quite simply, their efforts won’t work in the long run.

They might see some short term wins and some small steps towards preservation of the past through efforts in a courtroom or with a regulatory authority.

But one day, they’ll wake up and wonder, ‘why did we do that?’

Back in June, my daily post featured the phrase, “What part of ‘it’s inevitable’ do you not understand?” That’s the guidance you should use to align and adapt to the future. It’s going to happen whether you like it or not!

With that in mind, here’s a fun story from 1995. Early in my career as a futurist, I was invited to address senior executives and customers of Nortel, at the Nortel Open in Tucson. It was a pretty high profile event with a lot of heavy hitters from the global telecom industry in the room.

I spoke about the rapid emergence of the Internet, and pretty much predicted the emergence of VoIP (voice over IP) and companies like Skype.

Looking back at my slides – and vivid in my memory – were my observations that existing telecom business models, products, companies and just about everything else would be subject to dramatic, wrenching change – from the ability to route telephone calls and data through the fast evolving backbone that was the Internet.

I heard later that the CEO, flying back to Toronto on the corporate jet, fumed at his team. “Who invited this idiot in for a talk?” Literally.

Nortel disappeared years later in a blazing glory of incompetence and massive missteps, just one organization in a long list refusing to accept & align to reality.

So today – are you Nortel?

(How bad did things become at Nortel? Read Innovation at Nortel? Invent What Has Already Been Invented!