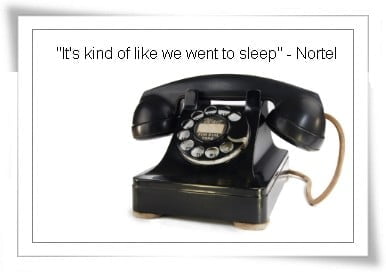 Gosh, I just wish Nortel would wake up one day. They haven’t yet. Their much hyped new “hyperconnectivity” strategy, announced to much fanfare by CEO Mike Zafirovski over the last few weeks, really isn’t anything new. Neither the concept, nor the phrase, which they now claim to have invented.

Their “bold” new strategy is curious, considering I’ve been using the phrase hyperconnectivity for over a decade, such as found within one of my Profit Magazine columns in 2002. [ read the article ] and have used it as a key trend on stage in front of tens of thousands of people … including with people at Nortel, as well as their competitors and industry partners. My observations on hyperconnectivity have also been covered in the media, such as this story which ran in 2003.

For Nortel to claim is has found a bold new strategy in a bold new phrase “hyperconnectivity” is simply untrue, and makes the current management team look rather sillly.

Gosh, over the last decade, I’ve provided my insight through internal and external keynotes and workshops with some of the senior business, R&D, marketing and sales executives at some of the world’s leading companies in the “convergence” space, including Motorola (including a meeting with all of their senior global R&D staff — 225+ people — in 2005), Verizon, the Society of Cable Telecom Engineers, Microsoft, Disney, the BBC. I’ve seen some remarkable thinking, particularly around architectures with respect to the new world around us in which everything is plugged into everything else.

I’ve also done my share of stirring up some futuristic thinking on this trend; it’s captured in a video clip from my site, circa 2002 or so, in which I talk about the “hyperconnectivity” trend. I’ve got dozens of clips from some pretty heavy duty events (Society of Cable Telecom Engineers, Tampa, 2000+) in which I banter around the phrase. 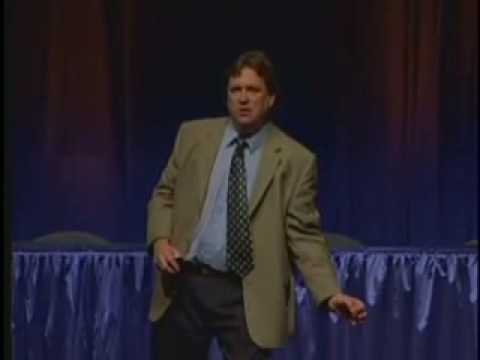 Which brings me to Nortel:

To much fanfare, CEO Mike Zafirovski announced to shareholders in early May that it was back in the game, and it’s game was — hyperconnectivity! Their brand new strategy? They were set to be a major player in this exciting new marketplace in which everything is plugging into everything else.

They were onto something revolutionary!

Yesterday, John Roese, the new CTO, in an interview in the Globe & Mail, claimed he “coined” the phrase.

OK, that ticked me off. As soon as I heard Nortel use the word “hyperconnectivity” my ears popped up. Heck, I even think I even had the phrase in my my slide deck when I presented to Nortel customers at the 1995 Nortel PGA Open in Tucson, which included most of the senior management of Nortel (at the time.)

And actually, it ended up being one of the major trends discussed at length in my What I Learned From Frogs in Texas book. It’s a phrase that I’ve used on stage, with tens of thousands of people listening, ranging from the US Army Corps of Engineers to Disney, Motorola, SAP, and hundreds of other organizations.

And it’s not even like I made the phrase up; it existed in various telephony magazines as far back as 1995.

What’s interesting is this: at the end of March, there was a flurry of activity on my web site, as people from Nortel.com googled the phrase “hyperconnectivity.” Many found my video clip; many watched it. At the end of March, they registered the domain name. Then their CEO announces a bold, exciting new strategy!

Except — well, it’s not bold. It’s not terribly exciting. Everyone else is already doing it. Cisco, Motorola, and just about every other organization out there knows we are headed rapidly into a world in which countless devices plug into countless other devices. They might use other phrases, but everyone else seems to be already well ahead in the game.

It’s almost as if this is a bad joke. In the Globe article, the CTO claims “it’s kind of like we went to sleep, woke up, and found the world had kind of circled around where we were.”

Actually, I think most of the rest of the tech world has alread moved well beyond Nortel, and Nortel is obviously still in some soft of semi-awake state.

I’m not into domain name speculation, though it would have been fun if I owned hyperconnectivity.com.

What’s galling — perhaps more so, indicative of yet another fumbling of strategy at Nortel — is how they now claim to have “invented something new” that lots of people have been talking about and thinking about for a long time.

What can we learn from such a series of CEO mis-steps? Several things:

I’m saddened most of all by this Nortel thing because, well, once they seemed to be a cool company. Now, they just seem to be tired, in a marketplace in which everyone is charging ahead at light speed.

I just feel like scolding Nortel, but sadly, this latest bit of silliness just seems to be yet another step in a lot series of fumbling missteps.

Update: for those who are asking about “prior art,” another posting details a bit of that. Find it here.