As with anything, the opportunity around the idea of the ‘smart home’, and the reality of what will transpire, varies to a large degree. We are in early days yet! 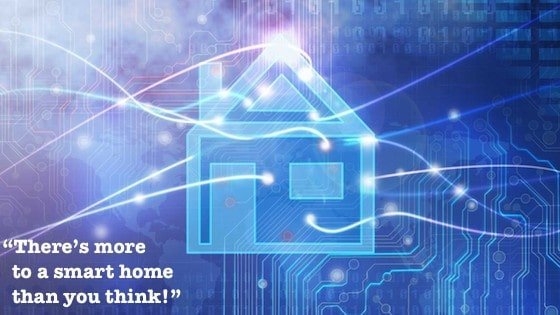 That was the essence of an exchange I had with a potential client in the home/condo construction market; they were looking at me for an executive offsite concerning their plans in this space, and wanted a senior level executive session that outlined opportunities with smart home construction in the future.

My key goal was to get across to them that a smart home doesn’t just involve throwing in some Internet-connected devices;  it’s not just about the Internet of Things; there is a lot more potential, and the scope of the opportunity is pretty significant in the long term. Given that, they really needed to take a substantive approach that involved not just short term goals but some long term thinking.

Here’s what I outlined:

For each of these areas, I’ve spent a lot of time in the last 20 years. By way of examples:

One of my favourite future phases is from Bill Gates: Most people tend to overstate the rate of change that will occur on a two year basis, and underestimate the rate of change on a 10 year basis. So it is with the smart, connected home. We’re going to be in a different space 10 years from now, but we are only just starting to define that!

Closing comment? Back in the late 90’s, I wrote a monthly column for one of the world’s leading airlines — Canadian Airlines! One of my columns had to do with the smart home of the future. It’s a fun read today – and I was pretty right about the trends going forward! Have a read! 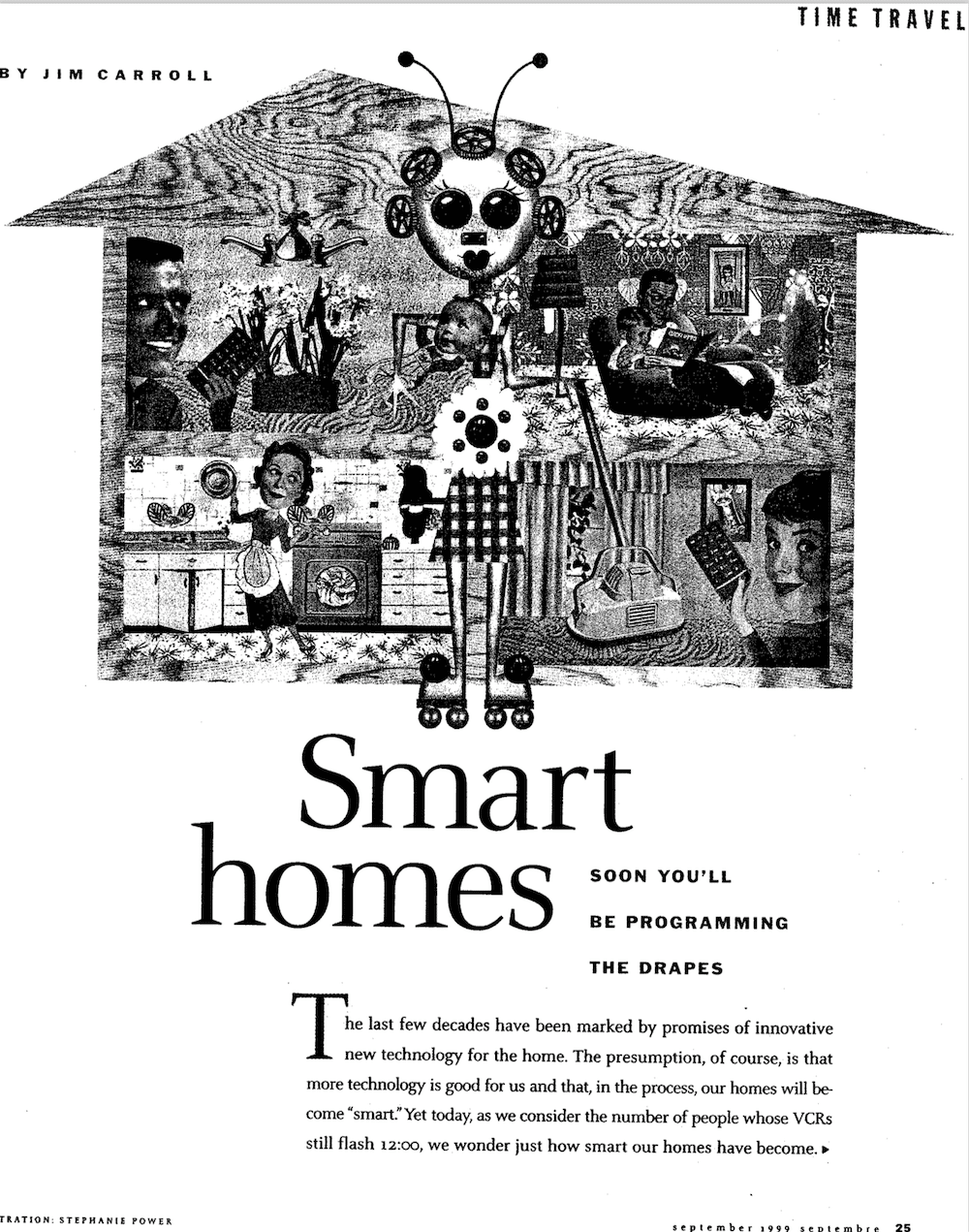 The last few decades have been marked by promised of innovative new technology for the home. The presumption, of course, is that more technology is good for us and that, in the process, our homes will become “smart.” Yet today, as we consider the number of people whose VCRs still flash 12:00, we wonder just how smart our homes have become.

Ever since the 1930s, many industries have predicated a variety of fanciful technologies that would find their way into our homes and make our lives much easier. Most predictions are, in retrospect, hilarious.

Perhaps one of the earliest examples was the introduction of the automatic dishwasher at the 1939 World’s Fair in New York City. Westinghouse presented a dishwashing contest between Mrs. Modern (using a Westinghouse dishwasher) and Mrs. Drudge (cleaning her dishes by hand). At the close of the contest (you know who won), the moderator commented that in addition to losing, Mrs. Drudge was not nearly as “neat and refreshed as when she started.” Yes, technology would make us feel better!

Washing dishes seemed to be a favourite theme of the World’s Fair: some 25 years later, the 1964 Fair featured the Norge Dish Maker. The appliance washed and dried plastic dishes – and then ground them up into tiny pellets, which it would then mould them into new plates, cups and saucers!

Walter Cronkite got in on the act, appearing on March 12, 1967 in At Home 2001, a half-hour show about the nature of the home at the dawn of the new millennium. He explained, for example, the duties of the host: “When a guest arrives, he just pulls out his inflatable chair – a small pressurized air capsule would inflate it and it would be ready for use. At the end of the evening he’d just pull out the plug and put the deflated chair back into his little bag.” Need to cook for the guests? Simply reach for the ultimate in convenience food. “A meal might be stored for years and then cooked in seconds,” he said, without a trace of scepticism.

Optimism continued to reign. In 1977, the Vancouver Sun reported on a “domestic android” manufactured by Quasar Industries, which could “serve your dinner, vacuum your rugs, baby-sit your kids and insult your enemies.”

There was a common undercurrent to many of the predictions about the “smart home.” We would have push-button control over everything, a “remote control for the home,” that would allow us to draw the drapes, water the plants, turn down the thermostat, and control virtually every other aspect of the house simply by punching a few buttons.

Of course, few of us today have such capabilities – and we wonder if we’d be able to use it even if it were available. After all, how many of us could manage that “remote control for the home” when we find ourselves stymied by the typical 50-button VCR remote control?

The industry is certainly trying to deal with the problem. There is no shortage of ‘smart-home” technology available and apparently some people are buying this stuff – the U.S.-based National Association of Home Builders estimates that, worldwide, some $2 to $4 billion is spent each year on smart-home devices that link security systems, lighting, and entertainment communication systems.

Who buys them? John and Missy Butcher of Chicago, for example. They have spent $100,000 on a home automation system, which means that (if they are in the mood), they can click the “Romance” button on their home automation controller and watch as the curtains are drawn and the lights dim, while listening to music designed to get them in the mood. “Our lives are much easier,” they note.

Of course, we might think, anyone who can spend $100,000 on a home automation system already has an easy life.

Will the smart home remain largely a concept, an expensive curiosity available only to the richest and most gadget-hungry among us? Likely not. This is one technology that is set to explode in terms of the number of customers it will gain and the practical role it will play in our daily lives. There are several reasons for this.

First, many people now have more than one computer in the home. The computer industry recognizes that linking them together into a home-based local area network is going to be one of the biggest opportunities of the next three years.

We won’t simply be linking the computers in our home. The technology will link all of our devices based on the computer chip into a central control panel, bringing us one step closer to the remote control concept of earlier decades. Three years from now, you may be buying a set of drapes with a microchip. Plug them in, program them – and forget about them.

Second, the emergence of the Internet plays a significant role. Though we think of it as a tool to surf the Web and read e-mail, it is also a technology that will one day link our refrigerator to its manufacturer, notifying the company when the appliance is about to break down – and, in the process, taking us through the next step in home automation.

And finally, there is the ever-decreasing cost of technology. The smart home has always been held back by the fact that the minimum investment was at least $2,000, but that figure is dropping quickly.

And, most significant of all, we’ll barely notice the technology as it sneaks into our home! We’ll be buying appliances, garage door openers, alarm systems and other things for our home, unaware that they contain the necessary intelligence to plug into our home network.

It’s not that we’ll choose to have a smart home – one day, we’ll discover that it’s already smart.

Not quite convinced? Let me quote Walter Cronkite, from that 1967 program. “Sounds preposterous,” he told his audience, with a bit of a smile, “but some people are convinced it will happen.”