Even as trend #1 – “techno-skepticism” – takes hold in our global consciousness, a second more profound trend is underway. For lack of a better phrase, let’s call it “Accelerating Acceleration.” How does this reconcile with techno-skepticism?

Because tech doesn’t go away – the timing has just changed as a result. You can see this explained in trend #1: Techno-skepticism and Re-timing the Future. 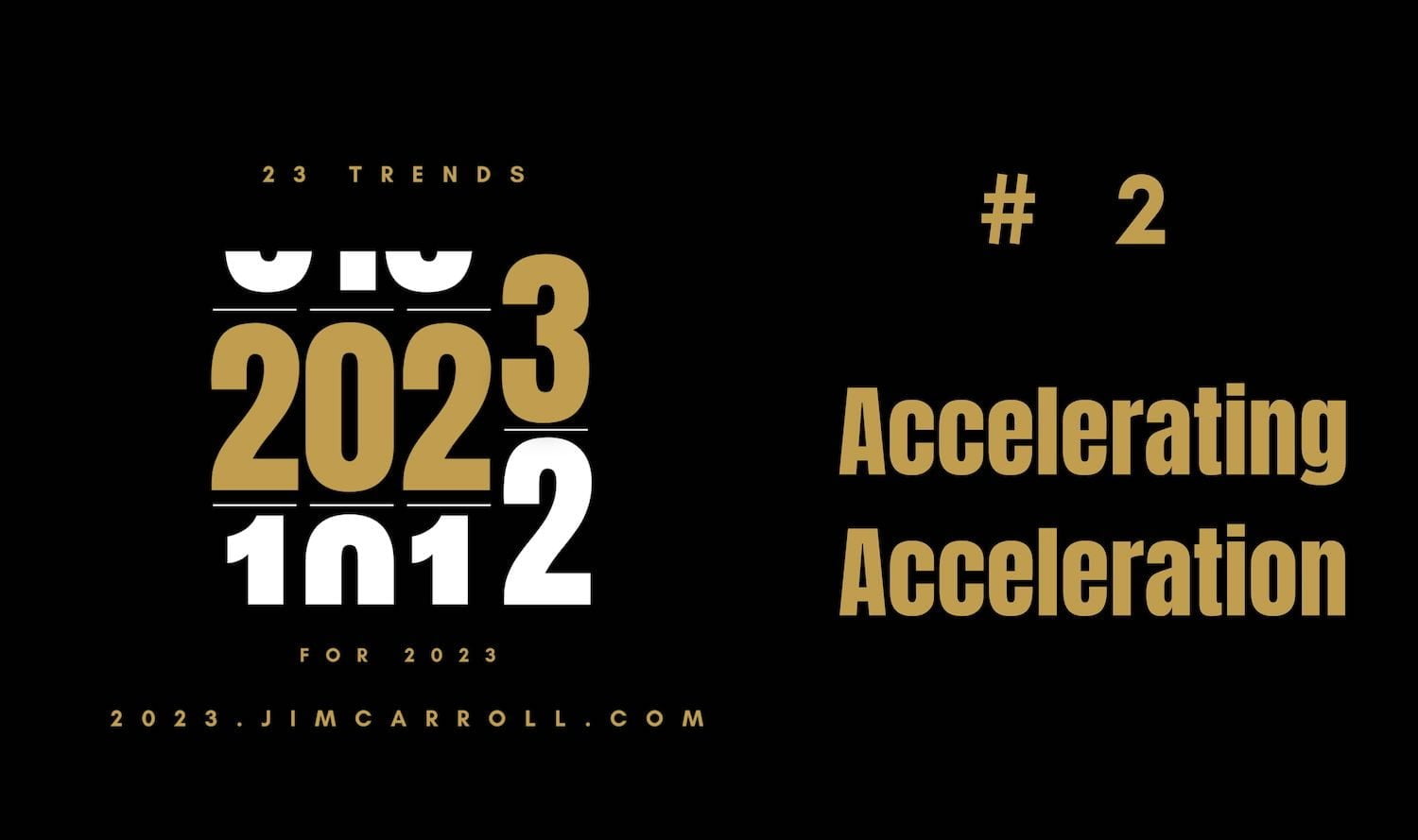 What should we watch for in 2023?  Simply put, the world was changing fast before. It’s now changing even faster.

That may not sound like much but it has significant implications.

Some simple numbers put the concept of ‘accelerating acceleration’ into context, in that we are now seeing several key trends of an inverse relationship:

Keep in mind that we have long tracked the pace of change by observing such constants as Moore’s Law – with which you will be familiar. But what we are really doing is, somewhat, accelerating Moore’s law through other trends. 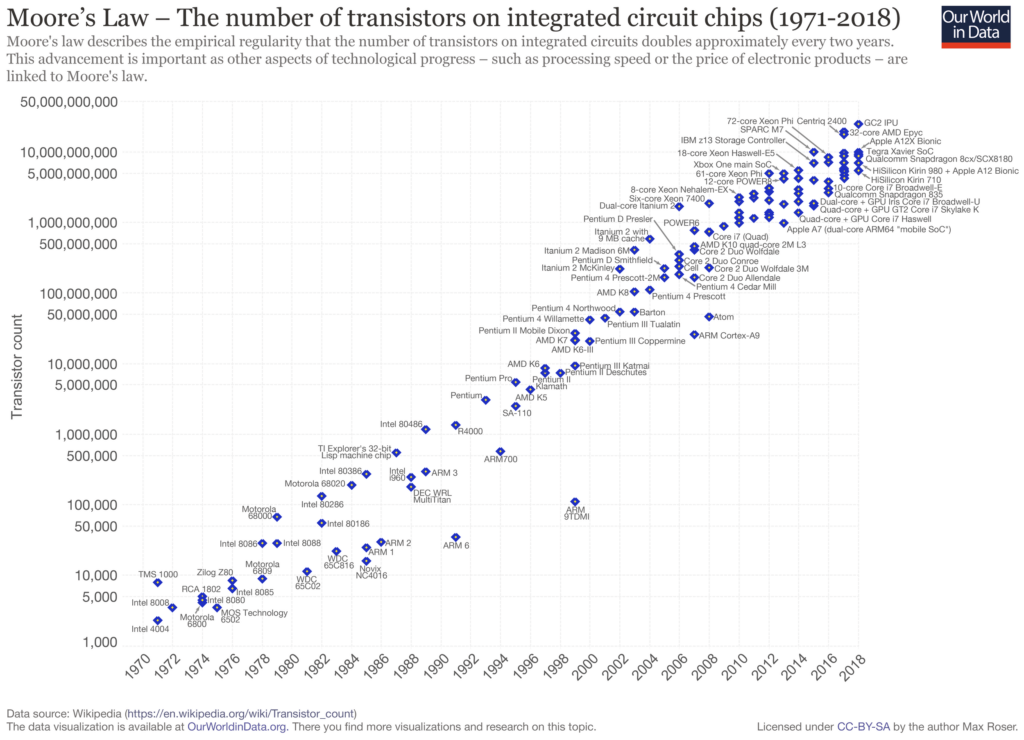 In essence, we are combining several fast trends together, which overall, makes them even faster.

So if the world used to be fast, it’s now even faster.

Let me try and explain. We know that the cost of genomic sequencing has seen a massive price collapse that is in line with the pace of Moore’s Law. This much is true. 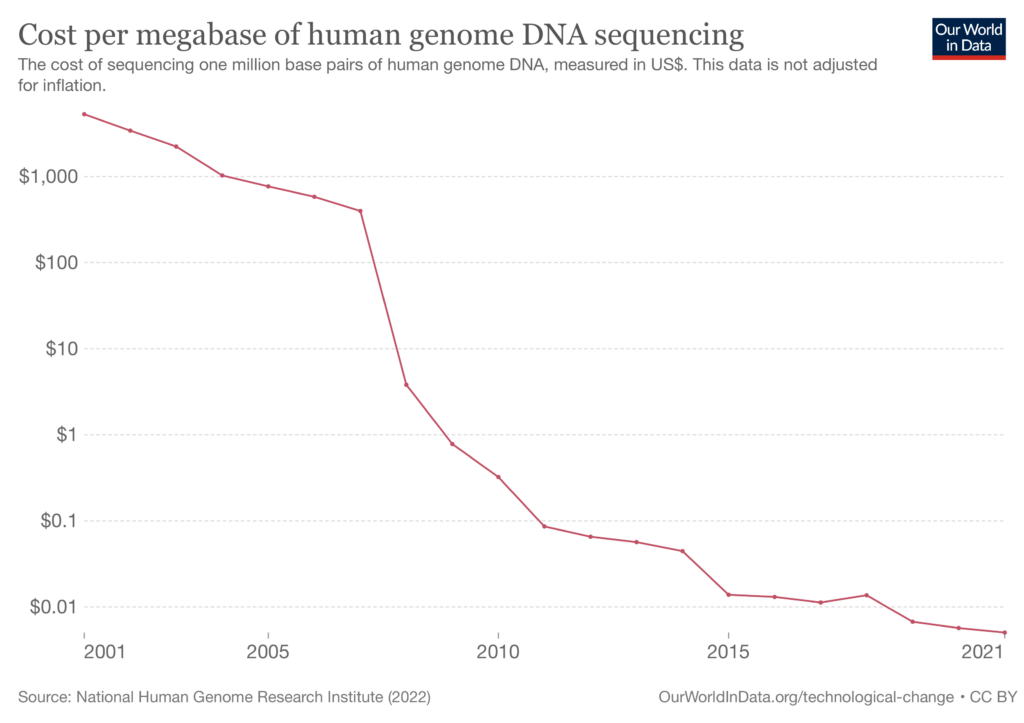 But what has also happened is that the actual adoption of genomic sequencing technologies and capabilities has picked up to a huge degree. We saw this, particularly as the result of Covid and the development of mRNA vaccines – suddenly, it was all genomics all the time. Globally, while genomics has been evolving quickly, it is now being adopted faster. That’s significant.

The same thing is happening with solar – the cost has collapsed, and the implementation has increased. 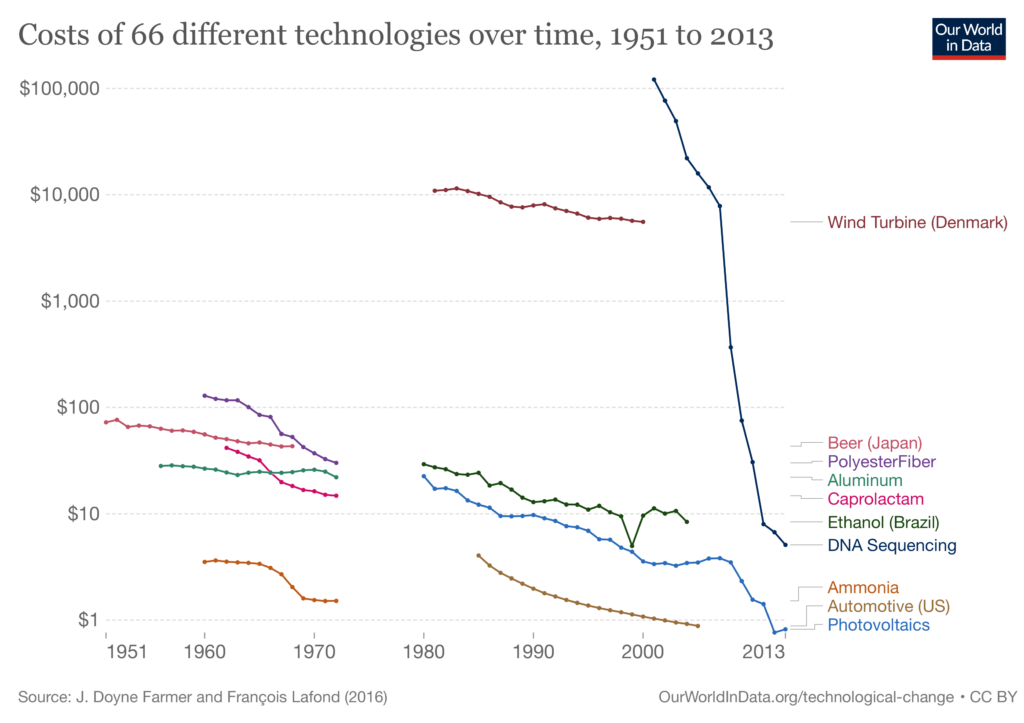 Moore’s Law and exponential growth are old news. What is new is that the ADOPTION curve for industries, technologies, and the science that is witnessing Moore’s Law is picking up. Combine the two, and that becomes a very real trend – and what it does is it ACCELERATES PREVIOUS EXISTING ACCELERATION.

Electricity, the telephone, the car and the microprocessor marked the 20th century. Now, and in the next few decades, the economic rules will be altered by transition to renewable energy, by the proliferation of artificial intelligence, by a wave of biotechnological solutions in health, food, energy and materials, and by a far more flexible, inexpensive and distributed form of production using 3D printing and advanced robots. These innovative technologies, categorised as General Purpose Technologies cut across sectors and geographies, have experienced dramatic cost declines and serve as a platform for additional innovations.

In 1958, Fairchild Laboratories sold 100 transistors to IBM for US$150 apiece. By 2014, 2.9 sextillion transistors were produced globally. There are only 200bn stars in the Milky Way, a number that is less than the square root of 2.9 sextillion! Since then, growth has continued, and yet there is currently a severe shortage of chips.

In biotechnology, development is even faster. The first human genome was decoded in 2001, and the price was over US$1bn. In March 2020, the Beijing Genomics Institute announced that it could decode a full human genome for US$100 – a price drop of a factor of 1mn in 20 years. If the development had simply followed Moore’s law, the price would have been 1,000 times higher.

Renewable energy is also following an exponential curve. Between 1975 and 2019, the price of solar cells dropped 500 times, and in October 2020, the International Energy Agency was able to establish that solar energy is now the cheapest form of energy production ever.

A reminder: Look no further than the smartphone in your pocket for evidence: The latest models are about a million times more powerful than the NASA computer that put the first man on the Moon in 1969.

But it’s now moving even faster than that. The reason is ‘accelerating acceleration!’

Case in point: within two months of launching, Midjourney, the lab behind a text prompt-based AI art generator, had nearly two million users. 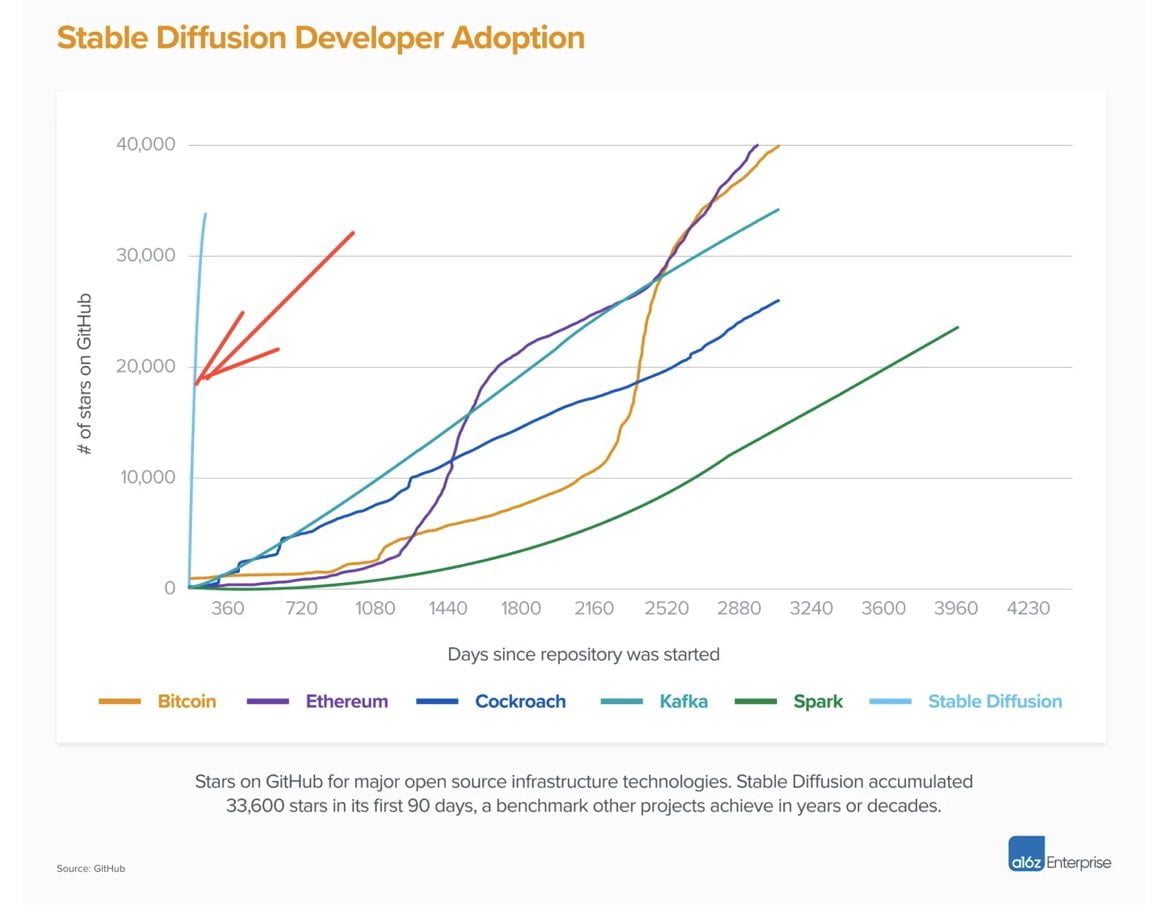 This is happening in the context of an explosion of developments in AI knowledge, as seen with the number of research papers. 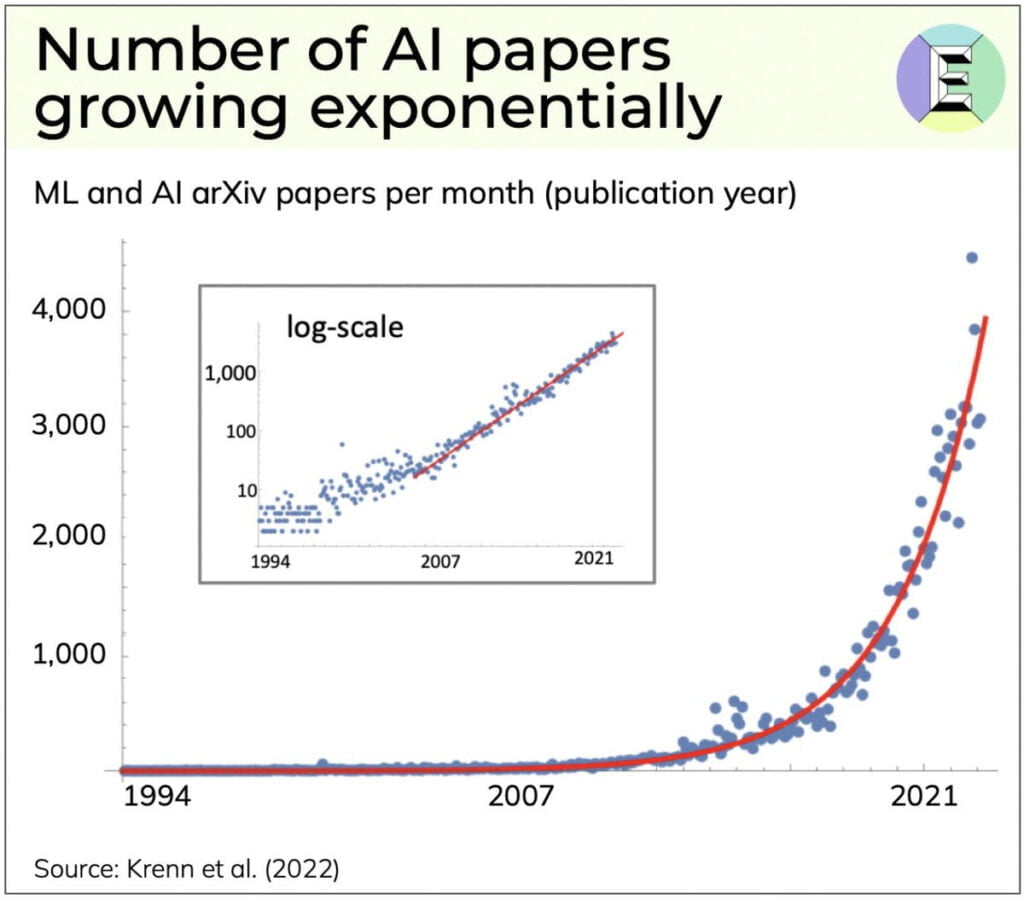 The impact? A massive, fast, alarmingly fast, impact on industries:

“We’re in an exponential curve… In the last six months, we’ve seen [AI] text, imagery and audio. I suspect music will be hit pretty quickly. Every two weeks, AI is improving on itself.”

Love it or hate it, AI is changing how companies create content; Will text-to-image generators replace creative roles, or simply up the ante?
1 December 2022 The Globe and Mail (Breaking News)

Want to boggle your mind with how fast things are moving? Read this. Even if you don’t understand it, you can recognize these are pretty big growth numbers.

Where does this lead to? Teletubbies! Text-to-image generation is moving so quickly that a prompt to ‘generate images of Teletubbies in a science fiction world’ can come up with something like this. (I didn’t screenshot this when it came across the Mastodon feed and so I am trying to find the original post!) The key thing is that this image generation below is using ghte GPT-3 dataset referenced above. And that dataset is exploding in size. Exponentially. 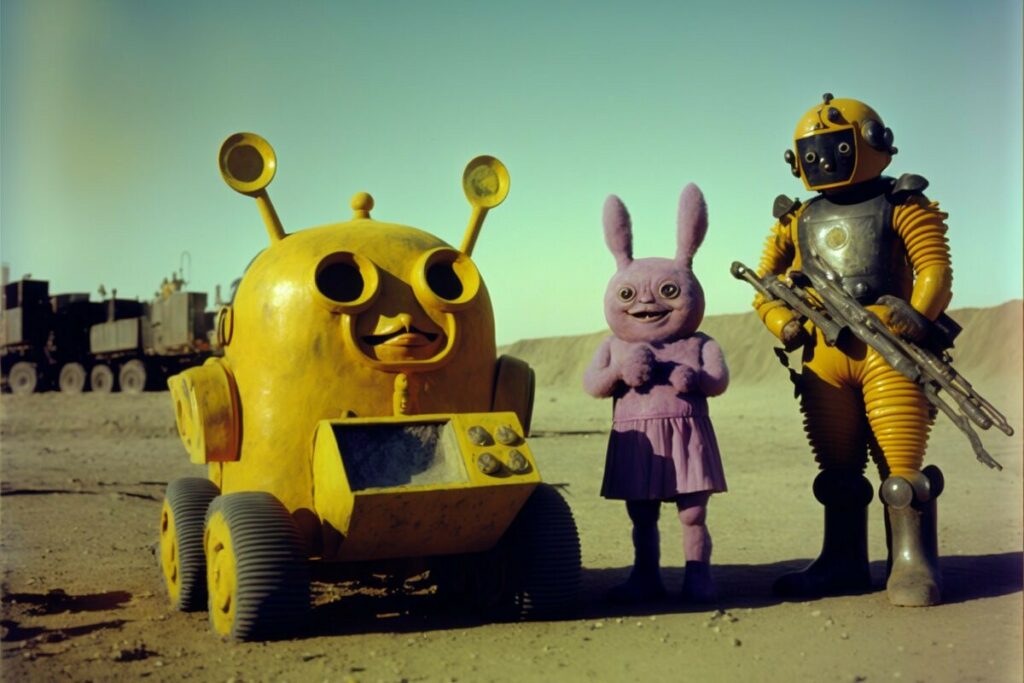 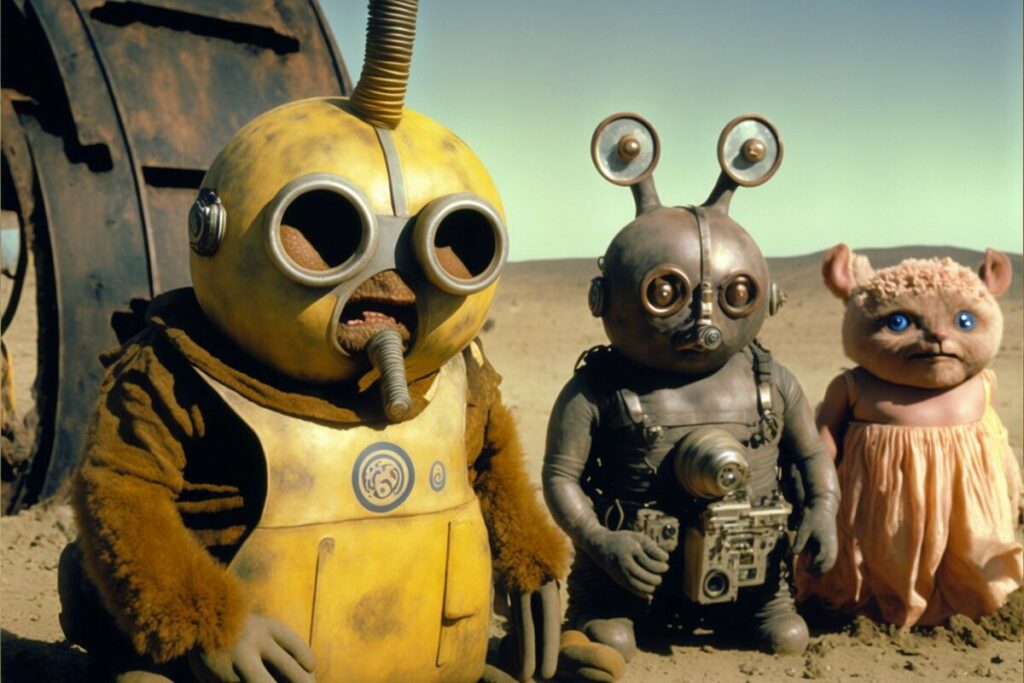 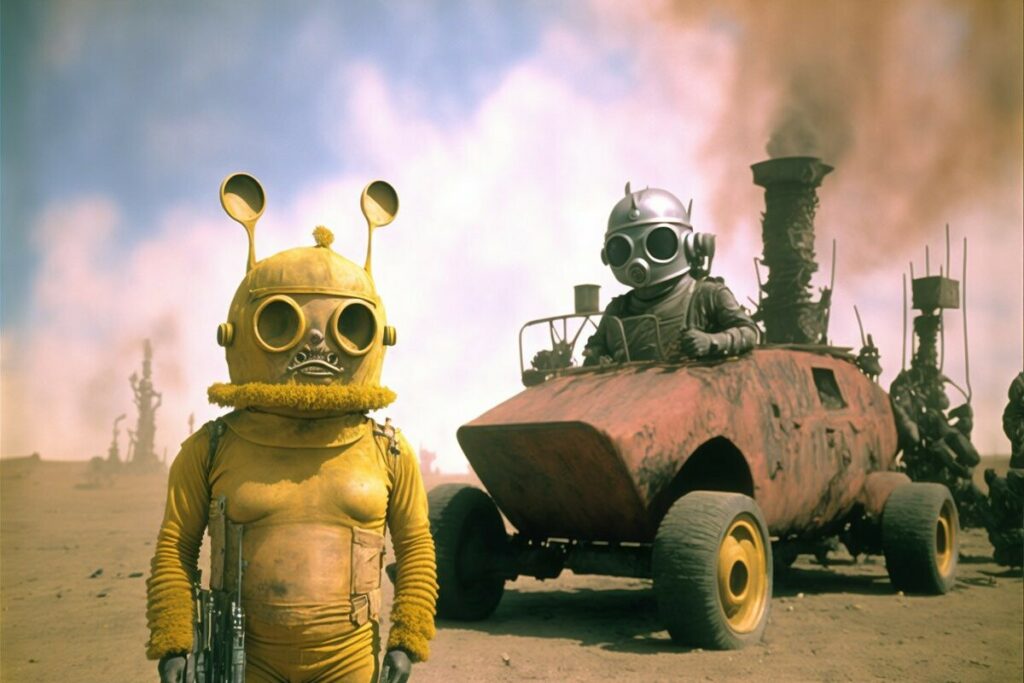 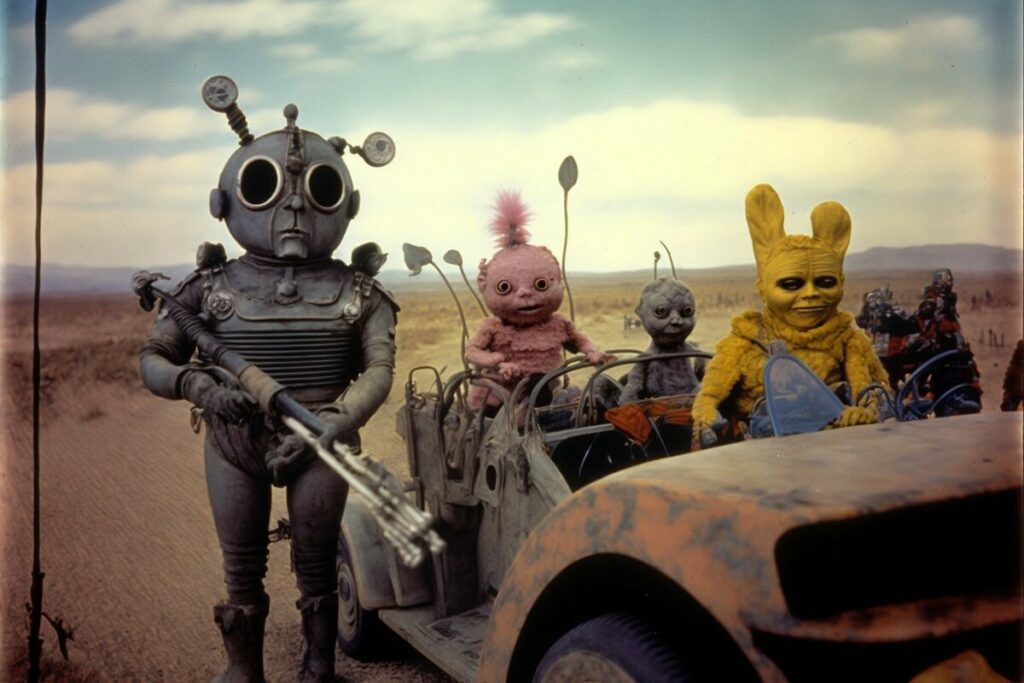 Seriously though – the acceleration of AI and faster adoption of AI combined together, provide for a fast future, impacting industries and people. EVERYTHING is impacted – medical device technology, autonomous technologies, medicine, agriculture. Anything based on science, anything technology oriented. It’s all going to speed up. Which is, essentially, everything!

There are many, perhaps too many to go into.

Perhaps the biggest issue is the acceleration of new and faster-emerging risk with a corresponding exponential increase in risk.

The first nation to develop a cryptanalytic ally relevant quantum computer (CRQC) will be capable of breaking much of the public-key cryptography that digital systems across the US and around the world use, and crack blockchain. China is currently leading in various areas of quantum and it could be the first to possess these capabilities. This would put the US, India, and the rest of the free world at severe risk.

My friend Paul Kedrosky put this into perspective in a brief exchange on Mastodon:

The impact on industries

What does this mean for you?

Consider this graph, often shared, with respect to the development of Covid vaccines. 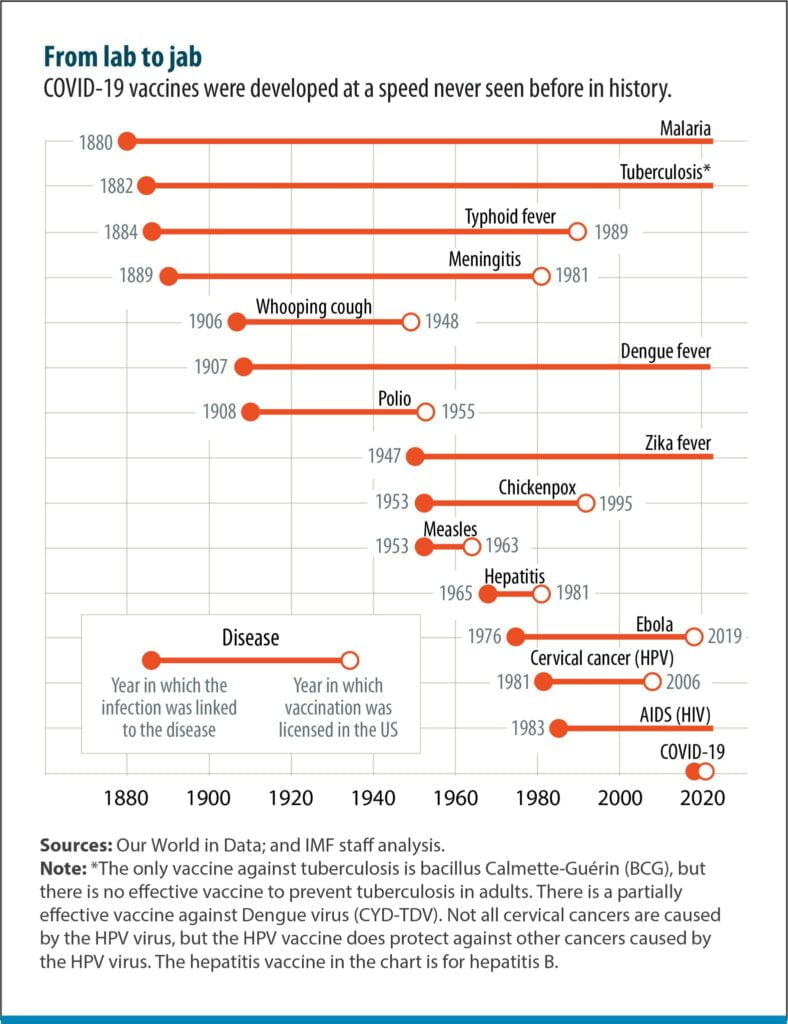 The impact of the acceleration of DNA sequencing is now evolving at a speed 5x faster than Moore’s Law.

Re-read that. We are now POST MOORE”S LAW. That’s accelerating acceleration right there.

The impact: In 2001, a fellow named Craig Venter sequenced his single genome at a cost of $100 million. It’s now down to about $100. I use to joke on stage that in a few years, I’d be able to go into a Dollarama and buy myself a little genomic sequencing machine. That’s probably not a joke anymore. Think about it another way. Every dollar in genomics research is going 100,000 times further – meaning, the fast vaccine development we saw with Covid is but a taste of what is yet to come. I often point out that the volume of medical knowledge used doubles every year. Post-Covid, it’s now every 78 days. Soon, it will probably double every 24 hours. Accelerating acceleration!

Need another example? Take this chart: although very difficult to see, has to do with the history of how quickly new products come to market, achieve market dominance, and are then replaced or hit market maturity. It’s pretty clear that longevity is disappearing. 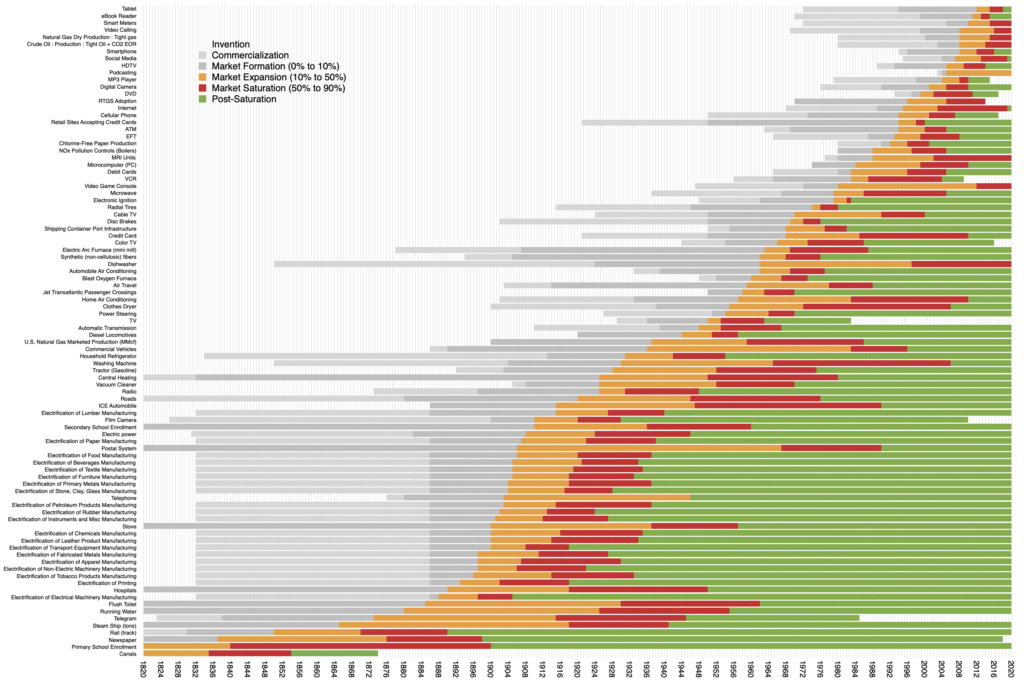 A key trend going forward is that AI capabilities are coming to every product. AI is speeding up, product lifecycles are collapsing. If you thought things were fast before, watch out!

The background? Something I often talk about on stage – is the issue of instant product obsolescence. In that context, one of the most profound changes to come about during the past two decades has been the collapse of product life cycles. Think about the graph in your marketing textbook from years or decades ago when you first learned about the concept of product life cycles: remember how it showed a product coming to market: sales increase, reach market maturity and eventually begin to drop off. That’s been the model of product life cycles as taught in business schools for the past 100 years or so. The rule of thumb was that companies would innovate and introduce a new product. If it succeeded, the company would experience growth. At some point, sales would peak. The product would then become obsolete or overtaken by competitors and sales would decline. That might involve a time period of 10, 15, or even 25 years.

What a quaint model! Too bad it bears no resemblance to today’s reality. The product life-cycle model today is being turned on its ear by instant obsolescence. In some industries, that product obsolescence now occurs during the growth stage; in the high-tech industry, the decline phase caused by instant obsolescence can occur during the introduction of a product or even before a product makes it to the marketplace. Some years ago, Lenovo pulled the plug on an iPad-like product even before it was released because it was obvious that its limited feature set had already made it irrelevant and obsolete in a very fast-paced market. The product simply had no chance of competing against the iPad. It was killed before it was even produced!

Now layer on top of this trend the fact that AI has suddenly and quickly matured. We are witnessing medical technology which can rapidly interpret data. Energy grid software that can analyze micro-grid renewable production rates and balance the grid accordingly. But it goes beyond these early use cases. We are now witnessing AI systems that can write professional e-mail messages for individuals who have natural language processing deficiencies. Many products will soon see ’embedded AI, ‘ with image, text, language, and video recognition built into the product. As the saying goes, ‘this changes everything.’

If you take these two key trends – products last for shorter periods of time, yet every product is becoming ‘smart’ – the linking of the two trends above – then clearly things aren’t just moving fast anymore. Something bigger is happening. And that’s why I think in 2023, a key trend will be that many senior executives in many industries will come to a realization that they need to accelerate their acceleration. Many have already been focused on ‘being fast’ – numerous keynotes that I do for corporate offsite meetings on behalf of CEOs are focused on that message and the need for agility.

But now, something is shifting – while the world is fast, it has become even faster still. It will also lead to new products, new opportunities, new ideas, and new disruptions. Read this item which I saw on Mastodon yesterday: 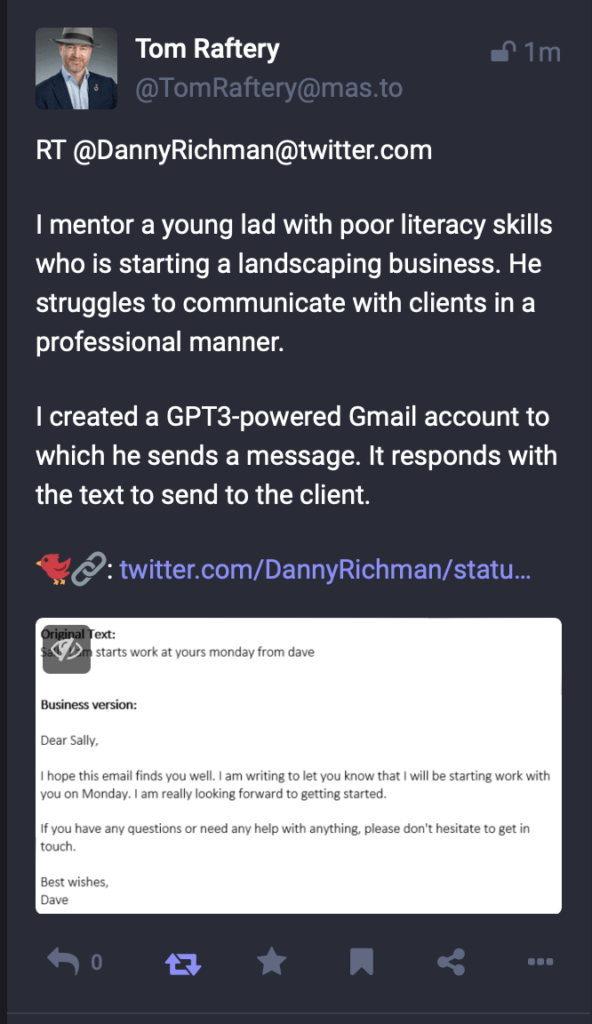 That type of stuff boggles my mind, gets me excited, and makes me realize that we are on the precipice for 2023 in which the world isn’t just fast anymore. It’s crazy fast!

If you want to master the future, you need to think about how your own world is changing. For 2023? You need to watch for the signs of accelerating acceleration all around you.

Some of the charts in this post: Max Roser, Hannah Ritchie and Edouard Mathieu (2013) – “Technological Change”. Published online at OurWorldInData.org. Retrieved from: ‘https://ourworldindata.org/technological-change’ [Online Resource]