It hasn’t been a great year for tech. Things went too far. And so the tech collapse in 2022 was entirely predictable.

This leads to my first trend to watch in 2023: “techno-skepticism.” 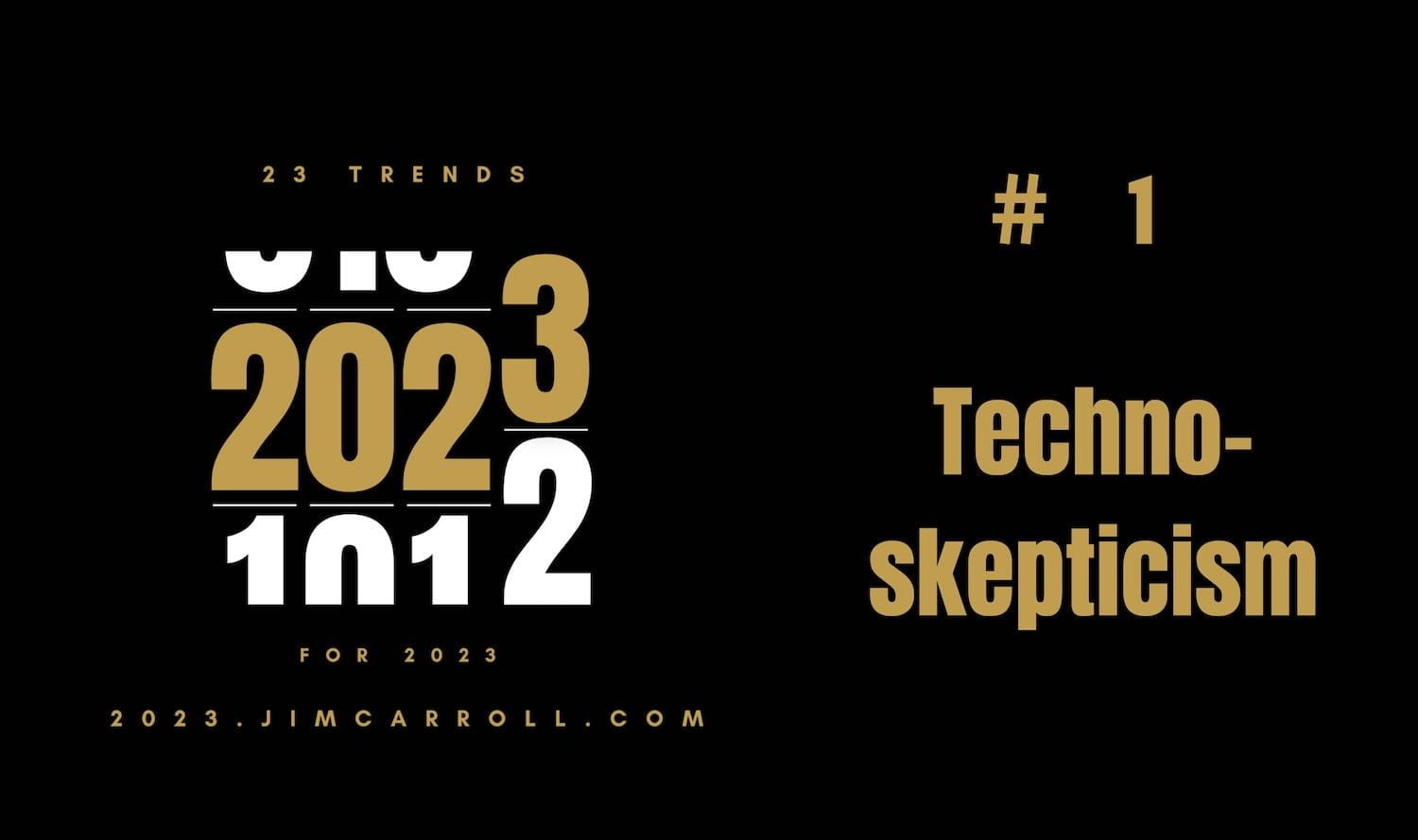 What is it? The opposite of techno-optimism of course! A researcher at Standford University did a wonderful job of defining this other extreme.

There is a word for this sentiment: ‘techno-optimism.’ Specifically, this is defined as the belief that technology plays a vital role in solving the most pressing threats to humankind. In moderation, this is a sound belief. After all, we live in a world where almost nothing is absent from the influence of brilliant feats of engineering — the Industrial Revolution has resulted in undeniable gains in efficiency and worldwide wellbeing. Yet, when taken to an extreme, this sentiment can prove destructive, in ways that fundamentally contradict technology’s initial aims.

The dangers of techno-optimism
30 November 2022, U-Wire

In 2022, a lot of people lost a lot of faith in the power, benefit, and opportunity of technology, and some are going to the other extreme of optimism. We will see this play out in a major way in 2023 The impact of this trend is significant, for it will cause challenges to the issue of the timing of the future and the speed at which some organizations will choose to align to it. Some will win because they will be aware of it but won’t fall to it; others will lose because it will become core to their purpose, and will defer their future.

Some could argue that we are now in the midst of a “dot com 2.0 collapse” – a tech collapse that doesn’t quite yet rival the downturn of 2000-01, but which is still pretty bad. Certainly, the media can make it seem that way. 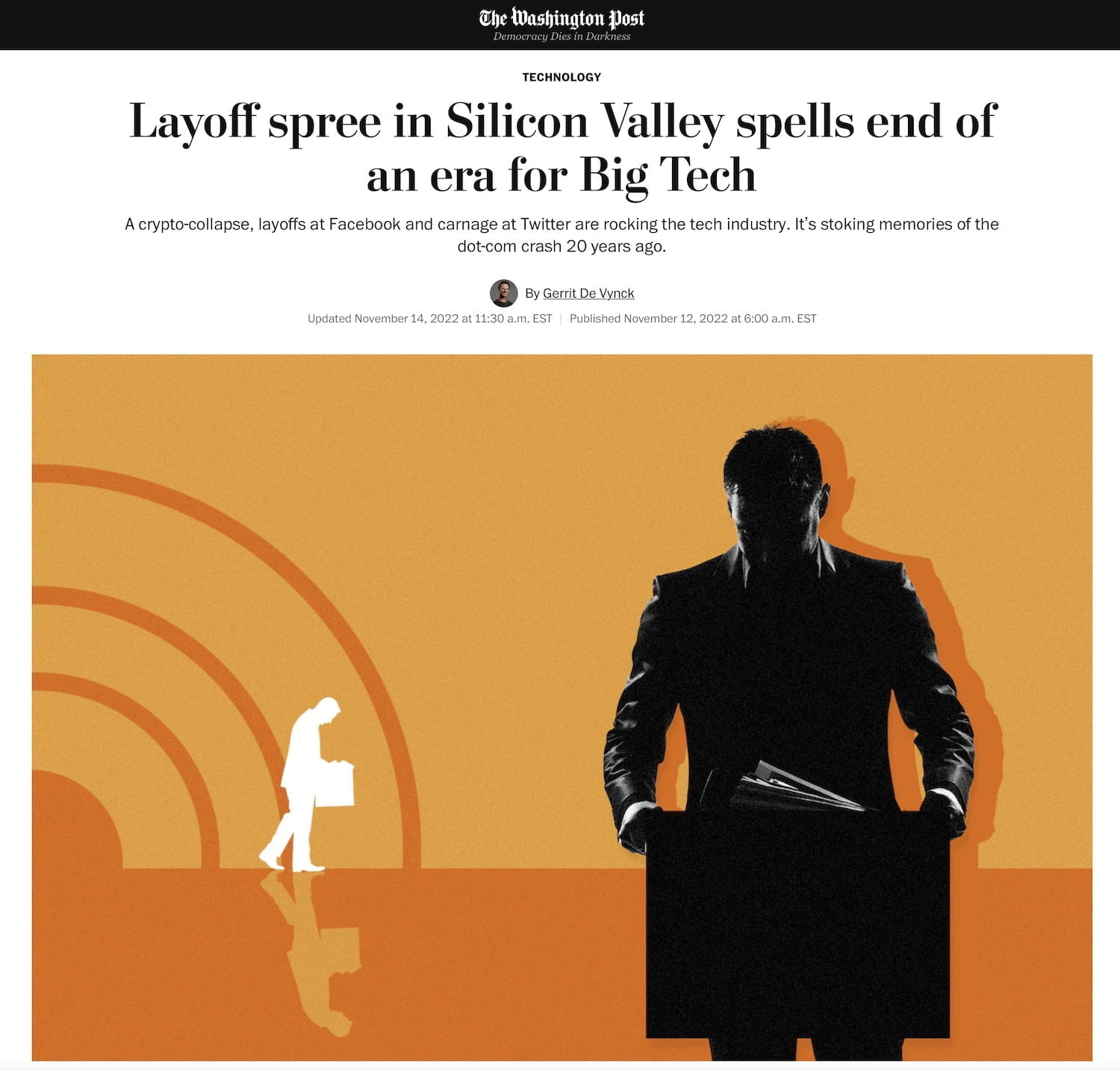 We are certainly seeing some pain and hurt across the tech sector as companies downsize. 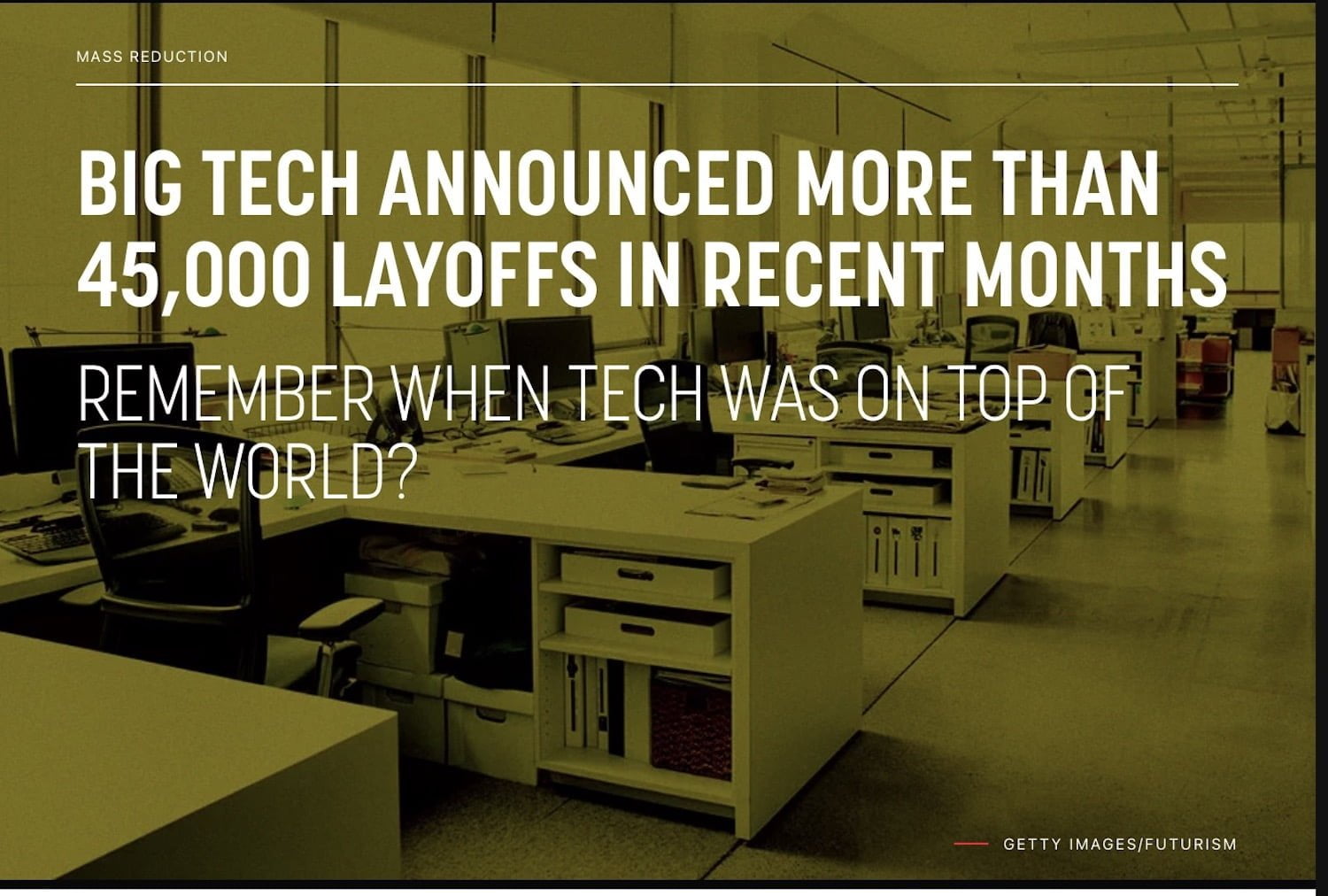 What went wrong? As always, Silicon Valley and technology boosters got too far ahead of themselves with hype and hysteria and needed a reality check. Having worked around and in technology for 40 years, I’ve been here before. Check my post about Faster FOMO: Why Dumb Trends Happen Faster than Before And What it Means to You.

Trend : Faster FOMO : Why Dumb Trends Happen Faster Than Before, And What It Means for Your Real Future!

Here’s just a bit of what has been going wrong: 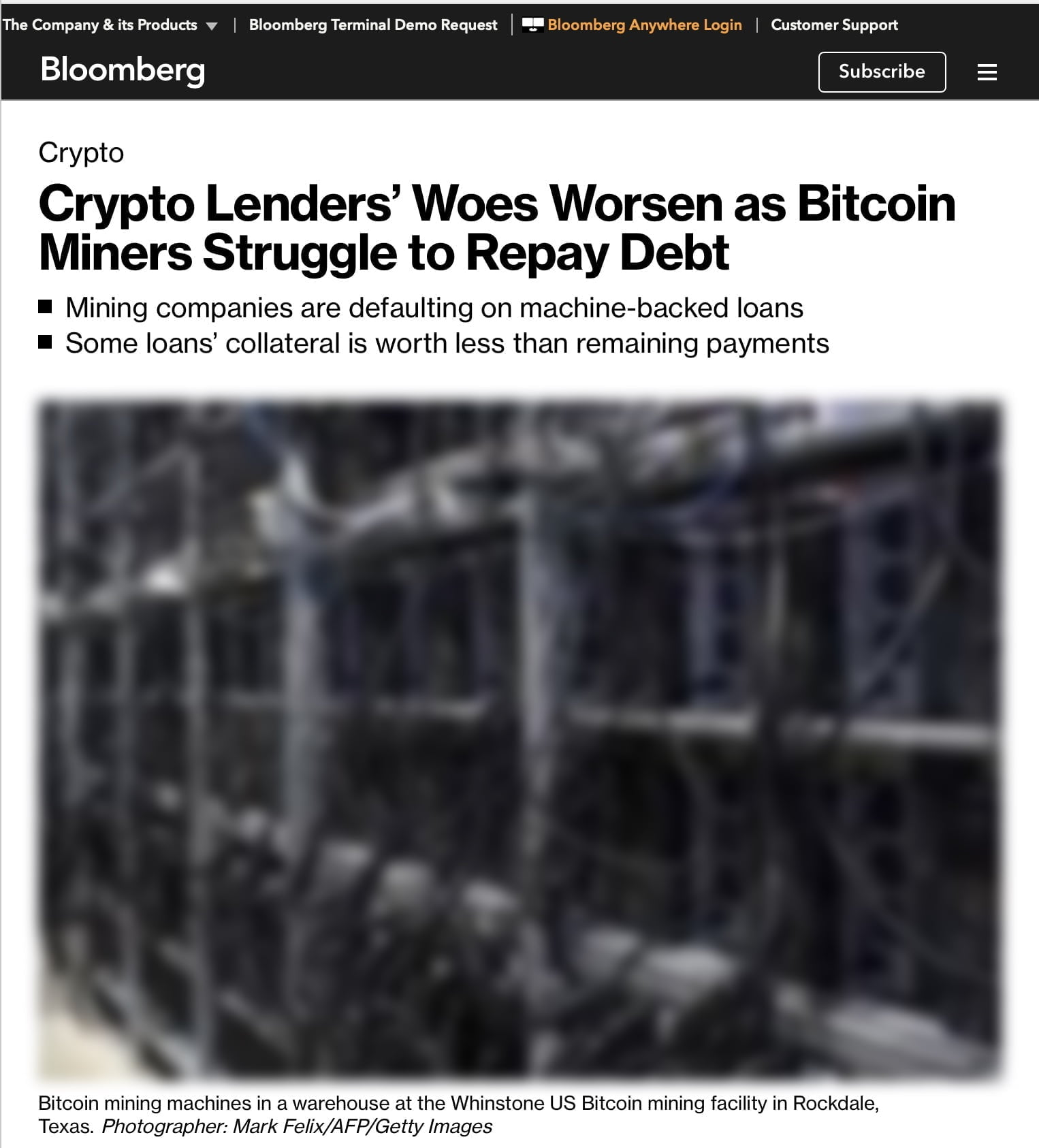 Substitute Nortel and Global Crossing in the headline, and you’ve got a news story from 2002. All of this has resulted in massively gloomy corporate earnings in the tech sector:

True, the so-called “tech wreck” has been astonishing in its size and speed – the tech dominant Nasdaq Composite Index has plunged 30pc from its November peak, meaning it has shrunk by $8 trillion in just one year.

Meanwhile, obscene amounts of venture capital and private equity money have been poured into some big technology companies at ridiculous valuations, and with laughably over-exaggerated prospects, only for those valuations to evaporate in the space of just months.

But while the tech giants of today aren’t going anywhere, their best days look to now be behind them. Years of uninterrupted growth have been brought to a sudden end, initially by rapid monetary tightening but further exacerbated by consumers and businesses reining in spending.

And so, there are layoffs, after everything seemed so overwhelmingly promising!

The layoffs come just a year after Silicon Valley was at its peak, with valuations of Big Tech companies spilling into the trillions, salaries at all-time highs and cryptocurrencies pouring new wealth into the pockets of investors and workers alike.

We’ve been here before.

Does this mean the tech run is over? I really must laugh at this type of sentiment because that’s what I heard from the editor of the Report on Business at the Globe and Mail when they killed my technology column in early 2002. “Tech is over,” they said. “No one wants to read about it anymore, and there is not much more to come.”

Of course, shortly after that lofty pronouncement, we saw the arrival of Youtube, Facebook, Twitter, the Internet of Things, the acceleration of AI tech, Uber, and so much more. Disruptive trends came into every single industry with massive force. What happened at the time, though, was an acceleration of techno-skepticism, which causes people to lose sight of the next set of opportunities in the future.

What are the next big opportunities? Electric cars trucks, batteries, micro-grid tech, renewable energy driven by tech. … there is so much disruptive technology around us that 5 years from now, tech-skeptics will realize they blew it once again.

Since 2010, the cost of solar power and lithium-battery technology has fallen by more than 85 percent, the cost of wind power by more than 55 percent. The International Energy Agency recently predicted that solar power would become ”the cheapest source of electricity in history,” and a report by Carbon Tracker found that 90 percent of the global population lives in places where new renewable power would be cheaper than new dirty power. The price of gas was under $3 per gallon in 2010, which means these decreases are the equivalent of seeing gas-station signs today advertising prices of under 50 cents a gallon.

Beyond Our Imagining
30 October 2022, The New York Times

Sadly, there are some things we never learn when we go from the lofty heights of excessive hype to the crushing lows of tech downturns!

The Importance of timing

What have I learned?

Everything I know about the future is that the most important issue has to do with timing – as described here in a keynote I gave for the World Bank in Morocco just before Covid.

The self-driving car issue? It won’t happen all at once – the arrival of the future is often staggered. I explain this in another video I filmed on the streets of New Orleans.

To a degree, figuring out the timing of the future has now become more important than figuring out the future itself, which is why I developed a full keynote around the topic quite some time ago, and which has drawn a lot of interest within my client base.

Timing The Future : How to Maximize Your Opportunities by Understanding How the Future Actually Happens

The speed of change, which has always been overwhelming, is only increasing as technology advances and massive disruption and transformation come into every industry. Jim Carroll’s key mantra – ‘the future belongs to those who are fast’ – has caught the imagination of CEOs and leaders worldwide as they align themselves to the era of acceleration.

We know that legacy is not a guarantee: the most successful businesses of the future won’t be the largest companies with a track record – but the fastest: those who can adapt new innovations, opportunities, and transformations into their business models. But getting the timing right will be the key to their success! That’s why Jim Carroll’s structure for success as found in his “5 Rules to Determine the Arrival of the Future” provides specific, actionable insight on how how to align to the timing of the arrival of the future.

What are those rules?

1. The future happens, but eventually
2. The future is usually slow, and then, instant
3. Technology puts great uncertainty on the accuracy of rules 1 and 2
4. Accelerating science can suddenly make your previous future estimate terribly inaccurate
5. Just when you think you’ve got the future all figured out, kids come along

Using this structure, Jim provides a high-level, fast-paced, content-rich voyage into the future, with perfect guidance on how to align your organization to what comes next, and how to align yourself to the heart of the trends!

That’s why this year, I’ve doubled down on one of my key observations: you’ll get the future right if you get the timing right! This has profound implications for what you do with your potential techno-skepticism! 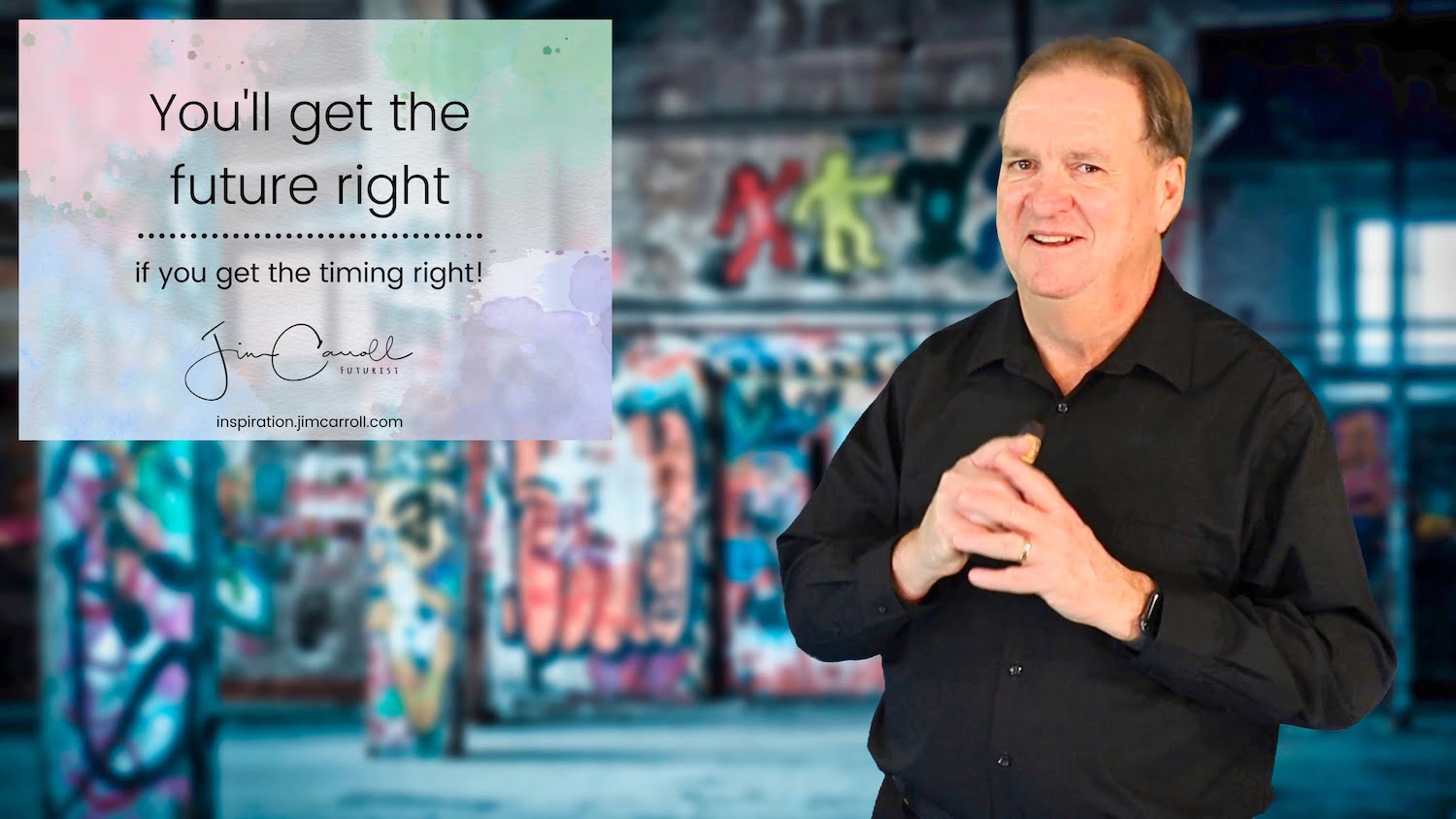 Read this article. Tech isn’t over. Some folks understand that this is just another cycle in a forever-cyclical industry.

Kforce doesn’t see demand for technology talent slowing down in the foreseeable future.

The Tampa-based tech and professional staffing company anticipates its predominantly Fortune 500 clientele to continue investing in “mission critical” technology, even during an economic downturn, according to President and CEO Joseph Liberatore.

“Technology is not optional and is core to all business strategies regardless of the industry, and we don’t see that changing,” Liberatore told investors during the company’s latest earnings call. “The war for technology talent is real, with far more open jobs and available skilled talent. The strength of the secular drivers of demand in technology was accelerated coming out of the Great Recession by mobility, big data, the cloud and rapid expansion of consumer-facing technology initiatives.”

“We continue to see critical technology initiatives from our clients in areas such as cloud, digital, [user experience and user interface design], data analytics, projects and program management. Conversations with our clients suggest that they will continue to prioritize significant technology investments to remain competitive regardless of the economic environment,” Mitchell told investors during the call.

Kforce is bullish on demand for tech jobs, even in a recession
2 November 2022, Tampa Bay Business Journal

The thing is – tech hasn’t gone away. What has gone away is, for a time until the next time, excessive hype, fraud, overachieving expectations, and all the other things that have happened so many times before.

If history teaches us anything, it is that there are two types of leaders :

History teaches us that success comes to those in the former camp.

Disruptive trends driven by tech will continue, but the timing is now uncertain.

And so with this trend – techno-skepticism – the future right now is up to you!