Daily Inspiration: “It’s only broken if you are unwilling to accept that it needs to be fixed!”

“It’s only broken if you are unwilling to accept that it needs to be fixed!” – Futurist Jim Carroll 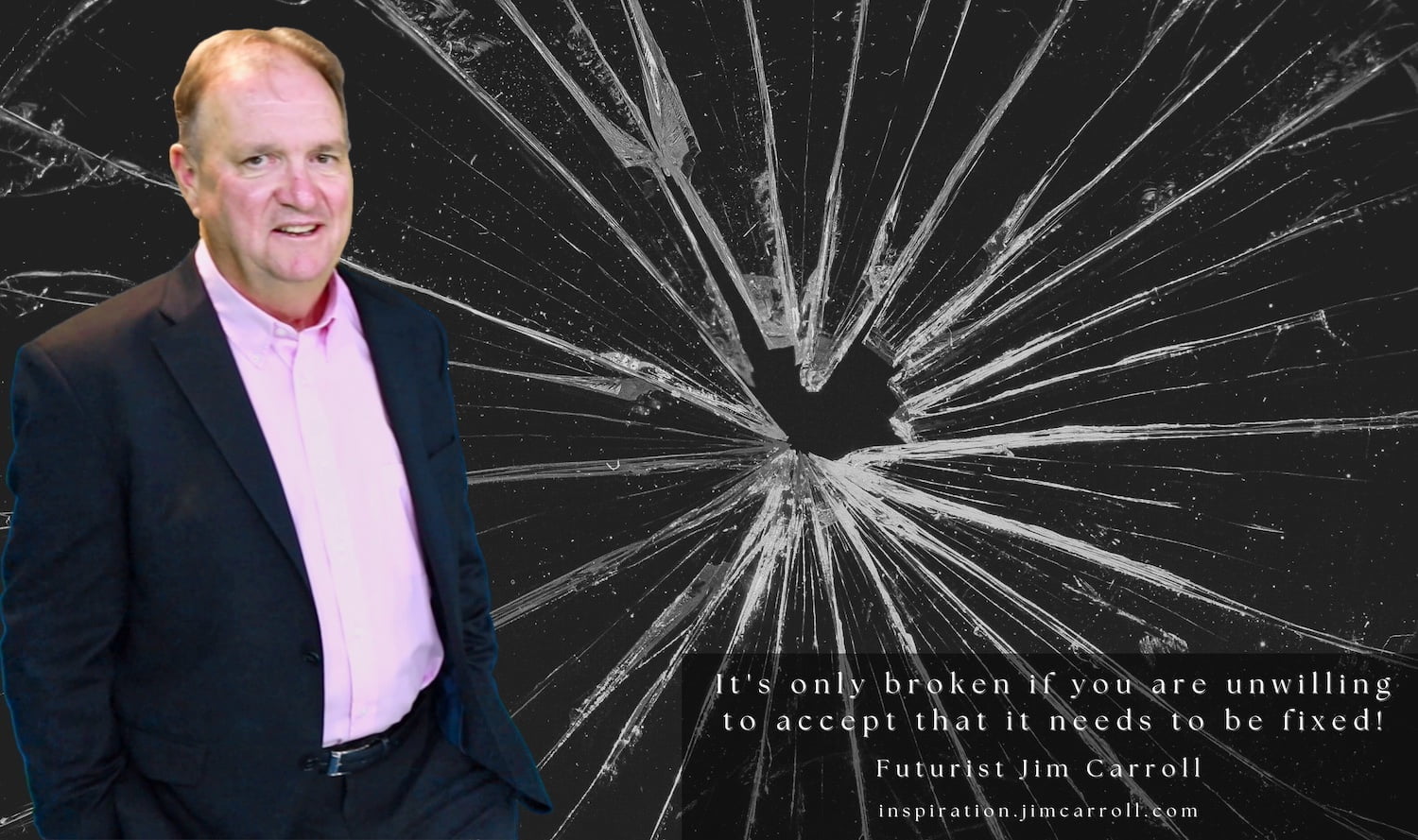 Anything that is broken has the potential to be fixed. The first step, though, is acceptance. Often, that’s the biggest problem in the way of a successful path forward – if you can’t admit that you are truly broken, you’ll never discover a pathway to repair!

Think of what happens when something is broken and denial sets in. Think of the worst customer experience you’ve had most recently – perhaps a long call-hold wait time or the inability to find service at a ‘customer-service’ desk. You’ve had so many of these as of late that you are frustrated, angry, and weary – and yet you see this type of thing happen again and again with the same organization. Eventually, you give up on doing business with them. But think of it in their eyes – it’s pretty likely that they don’t see that anything is broken with their customer service culture!

Denial is a dangerous drug.

Organizational failure often begins with an inability to accept that consistent failure runs rampant, and that small signs are indicative of deep rot. Let me rant with an example: I’m a regular traveler of Toronto’s Pearson International Airport, which post-Covid bears the dubious distinction of being one of the top-worst airports in the world. Everything remains somewhat broken still – long security lines, lost baggage, planes held at the gate on arrival, ostensibly due to overcrowding in the customs hall. (My most recent experience with this three days ago had a completely empty customs hall shortly after this announcement. Go figure!)

You can judge the fact that an organization is unwilling to admit it is broken by consistent failure. For me, it’s been the escalators at this airport – they never work! They’re always down, in a state of repair, or simply, blocked off. My Twitter feed is full of snarky whining like this: 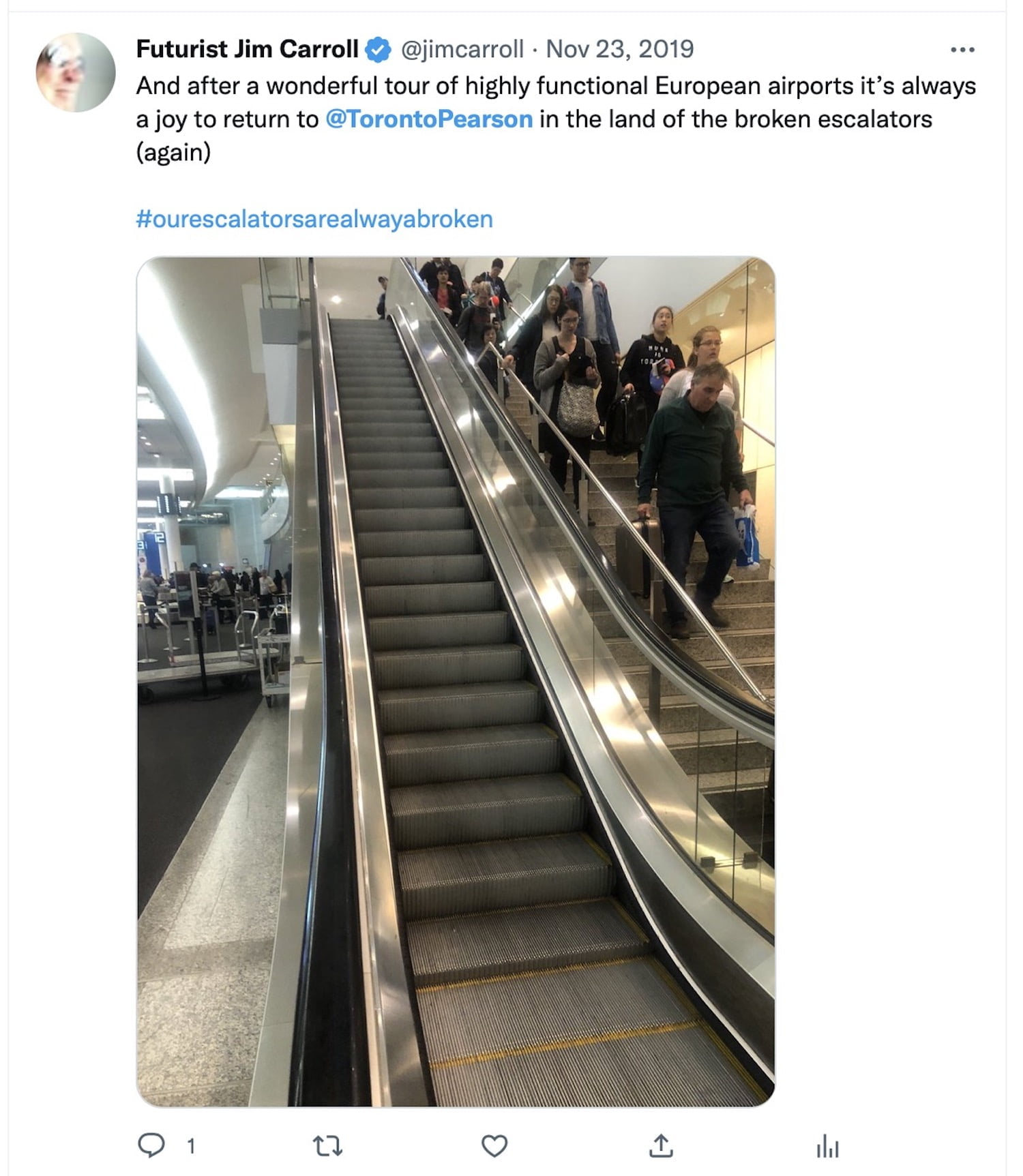 The failure of this simple operational function is so consistent that it’s almost become expected that when we transit the airport, things are broken, leading to snarky exchanges like this. 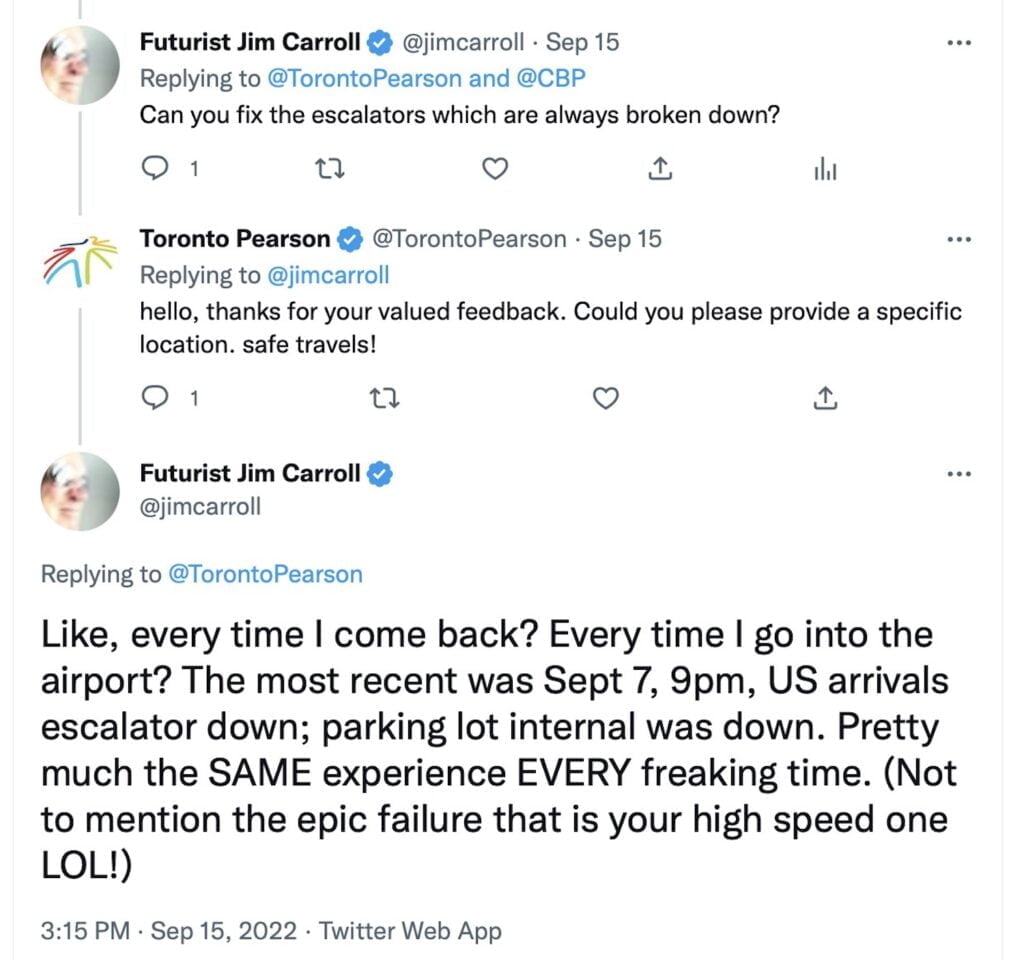 I really should show more maturity, but this thing has been going on for years. Meanwhile, the organization puts out fancy press releases about how it is working tremendously hard to improve things and make things better! Hint – it’s not!

How do you address the issue of denial? In my view, the Board of Directors should commission a study to determine why it has consistently, for well over a decade, managed to run an airport in which the escalators never work, and use that as the springboard to examine how it has allowed a culture of failure-acceptance to creep into every aspect of its operational activities. (They might also consider that the rest of the modern world has put in modern sensor-based technology which instantly advises them of infrastructure issues like this. But I digress.)

Here’s the thing – everything can become broken – business models, product integrity and reliability, skills relevance, customer support channels, logistics, and more. Anything, at any point in time, goes into a status in which it doesn’t function correctly and eventually goes into a state of non-repairability. People too become broken – society is seeing an acceleration of mental illness, substance abuse, depression, and addiction.

Whether personal or business based, when something is broken, it can only be fixed if acceptance takes hold. it can never be fixed if you can’t admit it’s broken in the first place. This has long been true – but now, the challenge of acceptance has been challenged by vast numbers of society who have decided since they don’t quite like the current reality, they’ll simply invent a new, fictional one. Their chance of success at fixing their broken life, business model, career skills, and future, in that case, become marginal, next to none. 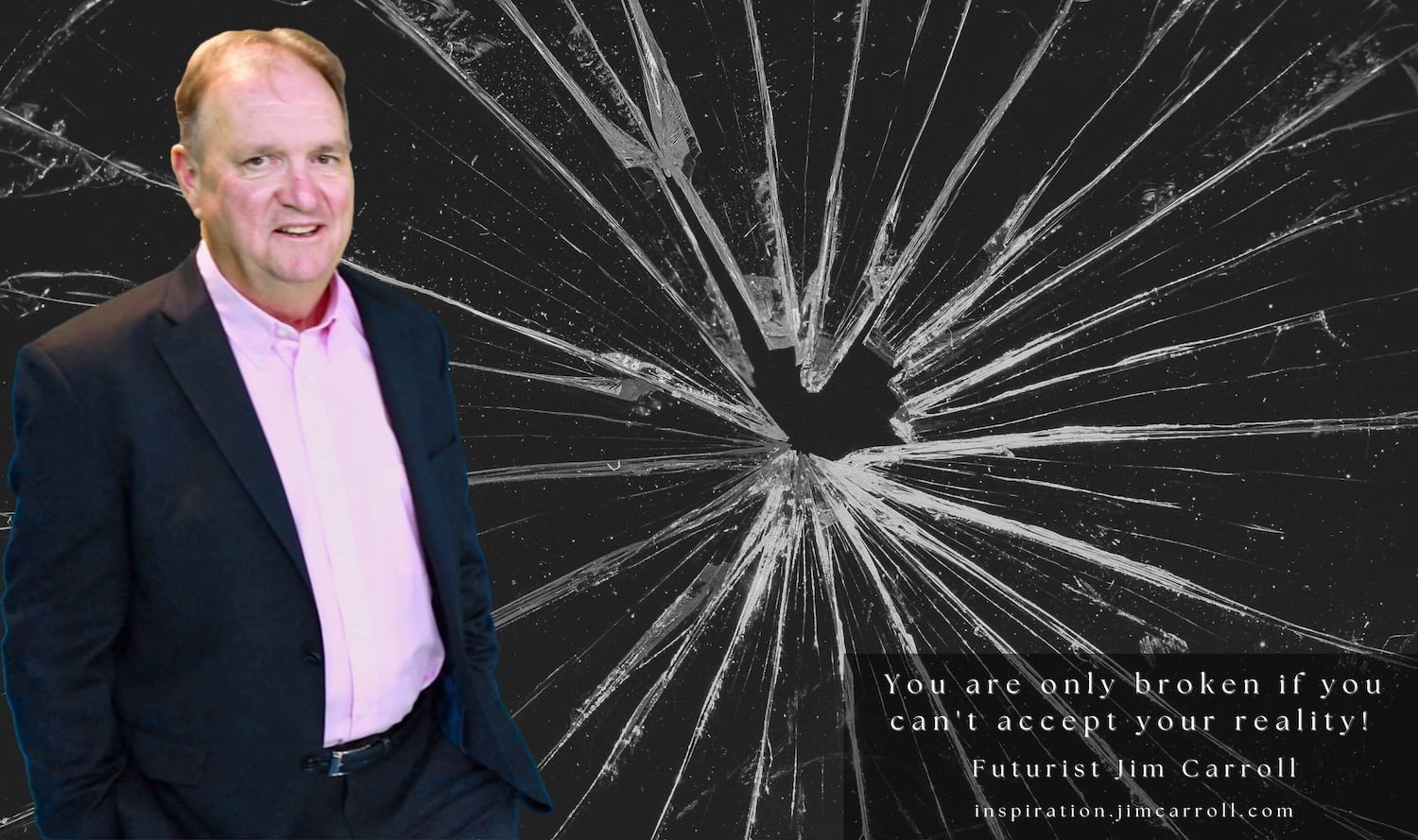 This brings me to the issue of leadership – when business models are broken, real leaders don’t cling to them, trying to preserve the past. They recognize that their plans, strategies, goals, and activities have been shattered and that it’s time to move on. This is what differentiates successful organizations from marginal performers in the era of disruptive business model change! (Can you tell I struggled a bit with the theme for today’s post?) 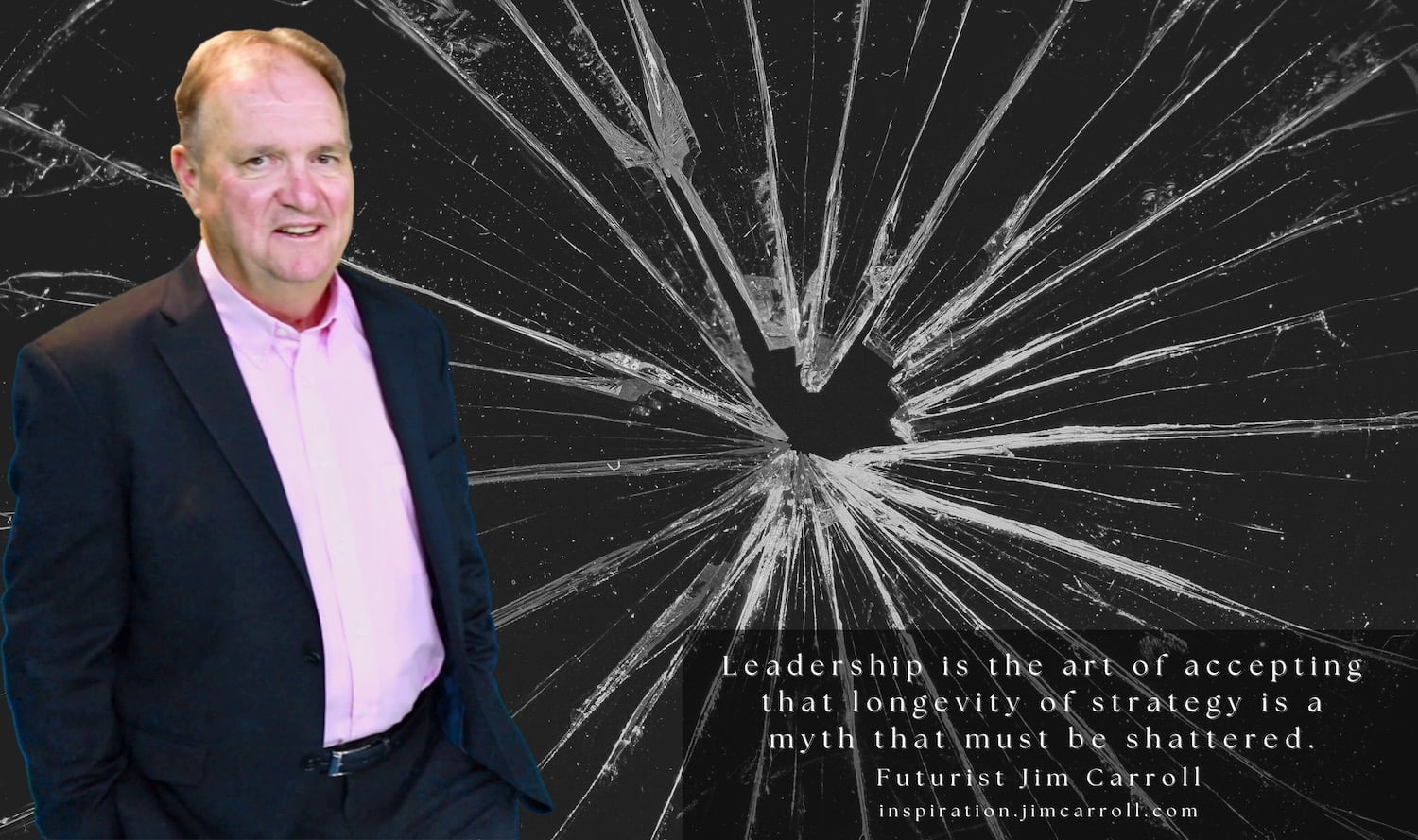