Daily Inspiration: “Failed leadership: When you spend more time talking about what you can’t do rather than what you can do!”

“Failed leadership: When you spend more time talking about what you can’t do rather than what you can do!” – Futurist Jim Carroll 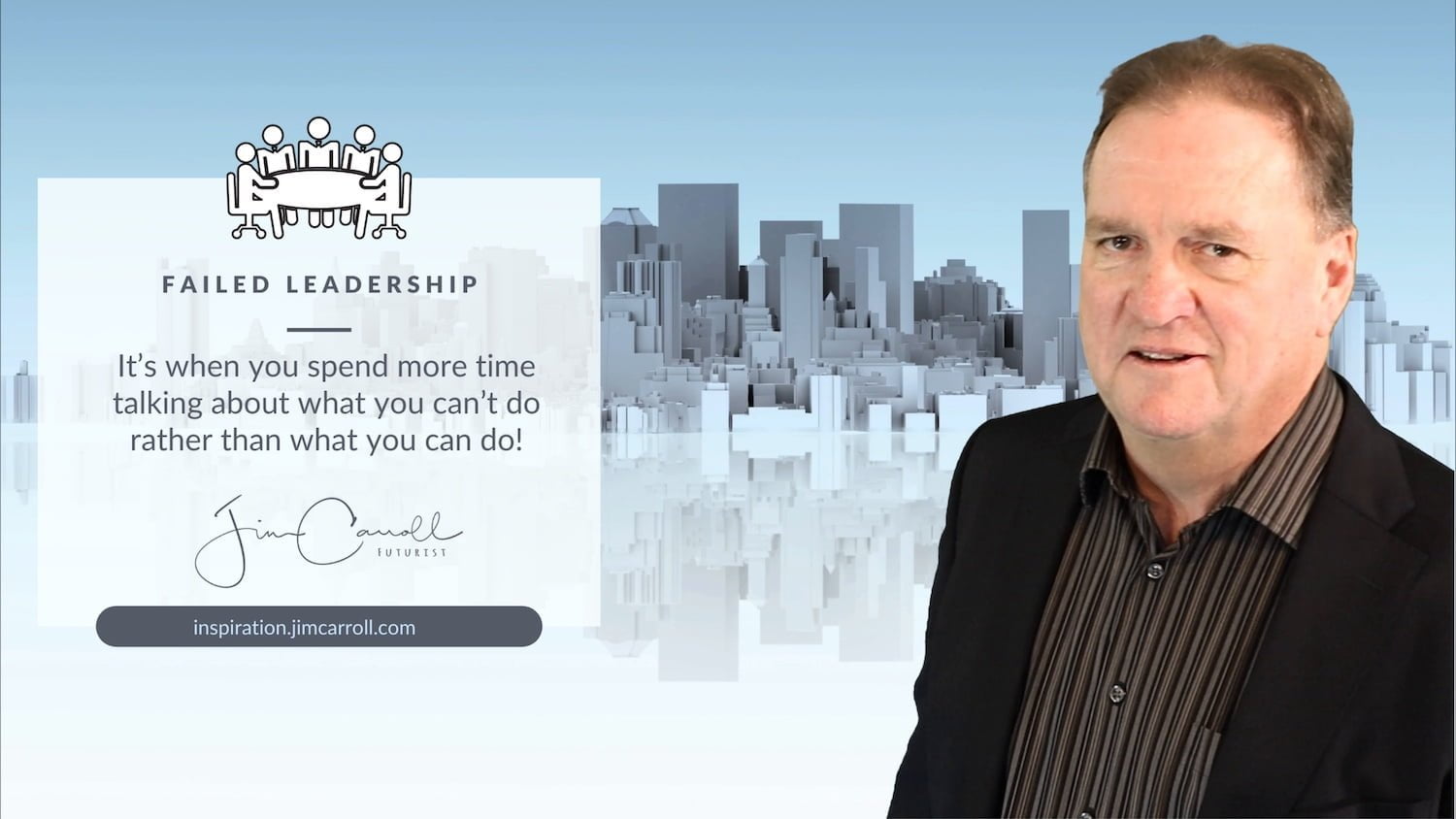 I try really hard in these daily posts to be inspirational, upbeat, and motivational, but in some moments of time, we must draw that inspiration from the opposite of that.

So here’s what we’ve learned in the last few weeks – the ‘active inaction I began talking about as a trend some months ago is very real; the ‘aggressive indecision I’ve highlighted as a leadership failure issue since 2002 is prevalent, and the fast speed of current events can quickly lead to organizational and leadership failure.

We continue to witness this in real-time in my country of Canada; most of us are stunned at what has transpired, horrified by a cancer that exists in our country, and apoplectic with the leadership failure we are witnessing each and every day.

And here’s one basic reality: years from now, the action – or lack thereof – of Ottawa Mayor Jim Watson and Police Chief Peter Sloly will have become a textbook study in the issue of failed leadership.  Their legacy will be one of inaction in the face of required action, excuses in the face of expected solutions, and relentlessly issuing talking points with great plans in the absence of actually doing anything. It’s pretty clear that they have no plan, no strategy, and no sense of how to actually do anything. Worse yet, it’s pretty obvious that many in Ottawa police are complicit, aiding and abetting rather than serving and protecting.

Frustration is reaching a dangerous boiling point. The residents of Ottawa, and the vast majority of Canadians, have clearly had enough of dithering, posturing, pronouncements, and blather, all the while witnessing a group of people who give everything they believe with the democratic ideal being given the middle finger. Yesterday, some of them took matters into their own hands, beginning to offer up small bits of resistance in the face of overwhelming idiocy.

It’s all not going to end well. A sense of despair, frustration, and anger is settling across this country, and this does not define who we are.

Already almost a week old, this article from the Ottawa Citizen lays bare what happens when incompetence runs up against reality. It’s probably behind a paywall, but I think it important enough that I’ll share the full text here.

A mix of those against rules to prevent the spread of COVID-19 and individuals calling for the overthrow of the federal government have been in control of parts of the city since Jan. 28.

Multiple failures by Ottawa police and city officials have resulted in what is being called an unprecedented occupation of Ottawa’s downtown core by protesters. The group, a mix of those against rules to prevent the spread of COVID-19 as well as individuals calling for the overthrow of the federal government, have been in control of parts of the city since Jan. 28.

A series of missteps allowed the demonstrators to gain a significant foothold in the city. Here are some key moments.

Intelligence analysts claim there was no way for Canada’s security agencies to know that the Ottawa demonstrations would turn into an occupation of the city. Ottawa police have said they believed the protesters would only stay a short time and then disperse.

But, at least a week before the convoy arrived, some analysts were sounding the alarm that what was headed to Ottawa could be similar to the Jan. 6, 2021, protests in Washington that resulted in a mob storming the Capitol Building. Protest organizers themselves issued their demands on Jan. 22, which, in part, included their desire to take over and run the country. Researchers using open-source material linked some protest participants to far-right groups. Anti-Semitic and various extreme messages, such as a call to execute Prime Minister Justin Trudeau, were already on display before the convoy rolled into Ottawa.

How did the protesters take over downtown? They simply drove several hundred vehicles into the core while Ottawa police watched and did nothing. Once the trucks were in place, the brakes on the big rigs were locked down, making them impossible to move.

The Toronto Star reported that federal officials appealed to Ottawa police not to allow trucks to park downtown.

The number of vehicles headed towards Ottawa should not have come as a surprise to police as news broadcasts in the days leading up to the arrival of demonstrators clearly showed the size of the convoy. Police and city officials failed to seal off roads leading to the downtown core to prevent such an influx of vehicles.

In contrast, police in Quebec and Toronto effectively contained protests in those cities by sealing off venues that would have allowed trucks to be parked in the downtown area and in front of government buildings. Quebec authorities also set up checkpoints to examine insurance and other safety documentation of big rig trucks. In addition, Quebec police towed smaller pickup trucks.

Critical to such policing is the ability to move quickly. Toronto police sealed roads leading to Queen’s Park on Wednesday shortly after seeing social media posts about a potential protest involving large numbers of vehicles.

Convoy vehicles were directed, by police, to the parking lot near the baseball stadium on Coventry Road.

No occupation of a city’s core area could be undertaken without a steady stream of supplies. The protest had access to fuel and food that allowed those involved to maintain their presence downtown almost indefinitely. How is that possible? Ottawa police provided them with the location.

With the blessing by senior law enforcement, the parking lot at the taxpayer-owned baseball stadium on Coventry Road became a logistics camp for the downtown protest. Ottawa Police Deputy Chief Trish Ferguson confirmed a police liaison team identified the parking lot for the protesters through negotiations with the group. Such an area outside the core provides protesters with “basic human needs,” the deputy chief said.

Protesters installed tents, portable toilets and facilities to distribute food and fuel for those occupying downtown.

Ottawa residents who have had to endure the protests have raised questions about why police were so accommodating to demonstrators.

Ottawa police decided to use a soft approach to dealing with protesters, claiming it was needed because of a lack of officers and the need to avoid violence.

Chief Peter Sloly called the response a success, noting there were “no riots, no injuries, no deaths.” On social media, Ottawa residents had a different take: People were being threatened and harassed while officers stood by.

The decision by police not to enforce many laws, even when they were being broken right in front of officers, emboldened protesters. It sent a clear message that they, and not police, were in control.

In addition, the fact city officials and police stood by and did nothing when protesters set up permanent structures sent a clear signal: The demonstrators were here to stay.

There were also questions why Ottawa police, a force with 1,200 officers, didn’t move in to clear protesters when on Feb. 1 the group dwindled to as little as 250.

FAILURE TO USE LEGAL MEANS TO STOP PROTESTERS

City of Ottawa lawyers and Ontario government officials appear to have failed in using legal methods to deter protesters from blockading streets.

In contrast, the Nova Scotia government used its Emergency Management Act to ban protesters from disrupting traffic or blockading any road in the province. The fines were steep: up to $10,000 for an individual and $100,000 for a company.

One of the most effective methods to quell some of the disruption from demonstrators came not from City of Ottawa lawyers, but from a private individual. A class-action lawsuit for $9.8 million filed on behalf of a 21-year-old Ottawa resident put at least a temporary end to much of the constant blaring of horns.

City council pressed its top lawyer on Wednesday about why the municipal government hadn’t filed a city-led injunction application targeting the occupation.

City solicitor David White said legal staff were working with police to see how an injunction might help. The city has to be careful about what exactly to ask from a judge to make sure an application isn’t too far-reaching, White said.