Daily Inspiration: “It’s not the trend that matters – it’s what you do with it that counts!”

“It’s not the trend that matters – it’s what you do with it that counts!” – Futurist Jim Carroll 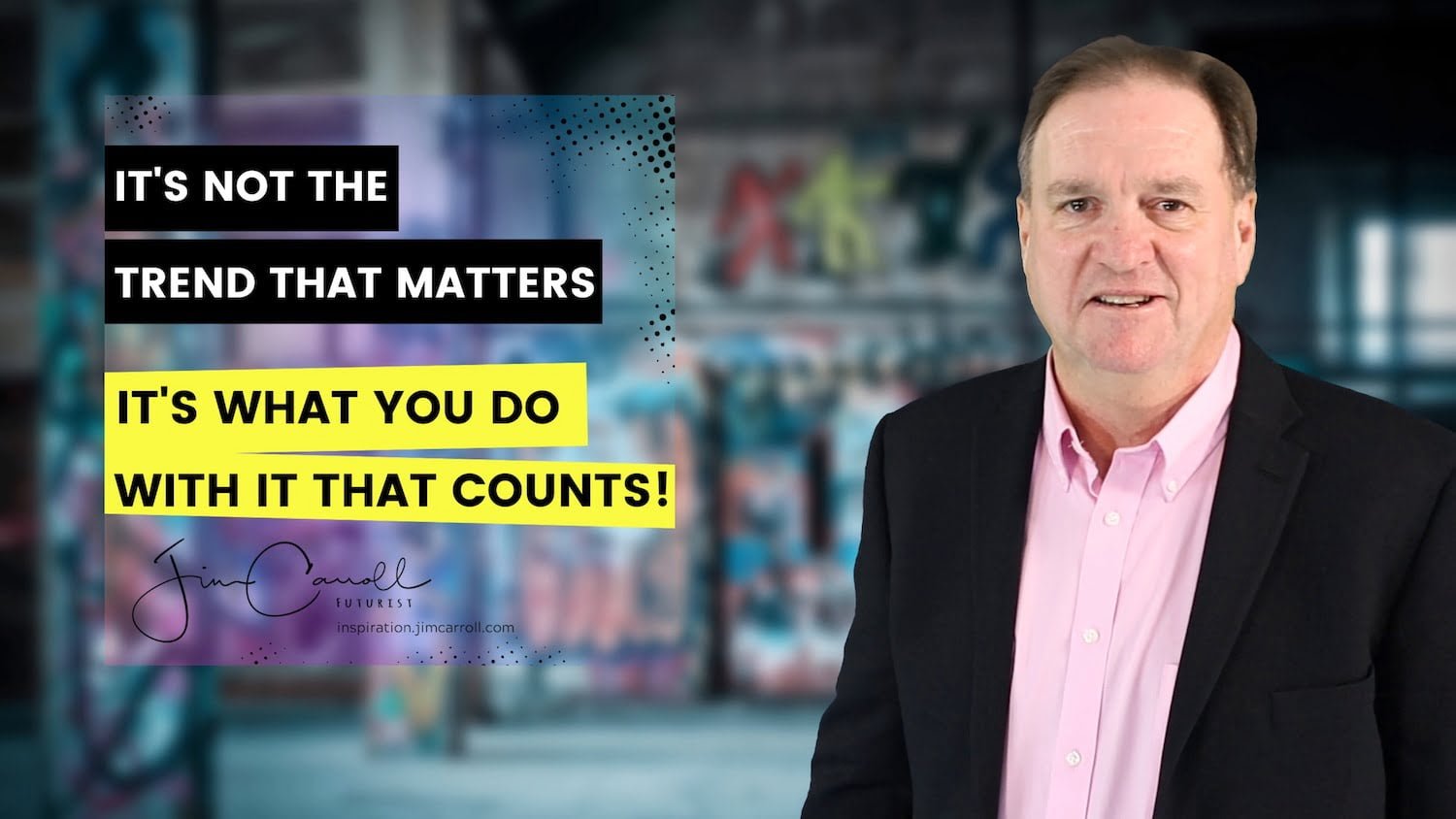 Organizations, and the people within them, often sleepwalk their way into a state of missed opportunities – often because they are aware of a trend of significance, but fail to act upon it. In other cases, they act upon the trend but don’t quite understand how to shape it into reality.

Failure to act? This is most often due to denial, change resistance, a belief that the status will always remain the quo. People seem to abhor change, the disruption of their world and tend to believe that everything will always stay the same. This embeds their mindset and infuses their culture with a sclerotic anti-future glue that holds them back from the ability to pursue what’s next.

They fail to decide, refuse to act, and slide into a form of relentless oblivion as they let their denial of reality cloud their view of the obvious. Bottom line: inaction is the original sin of failure.

In other situations, it’s about being in the right place at the right time, aware of the trend and it’s potential – but not quite understanding how to shape the trend to opportunity. I’ve lived through many of these examples, witnessing companies who missed out on massive future trends.

I was a very early user of software that went by the names RealAudio and RealVideo – from RealNetworks, no less. Around 1999, I was busy experimenting with the broadcasting of promotional keynote clips video from a server in my basement into my website, as it was becoming obvious that the idea of sending out promotional VHS tapes and CDs was soon to be from the olden days. At the time, to me and many others, it was pretty obvious that the idea that ‘everyone is becoming a TV station‘ was a trend of some significance – my co-author and I wrote that into our book in 2000, “Lightbulbs to Yottabits: How to Profit by Understanding the Internet of the Future.”

What happened? RealNetworks missed out on the fact that the future of online video wouldn’t involve personal broadcast infrastructure, but one massive, big system that eliminated all the complexity. The world was introduced to YouTube. Big trend, missed opportunity.

Another case in point – I have an MP3 player from 1998 in my office; it could hold 4 songs! If you went for a run, you had to pick some really good tunes! I had another, the Creative Nomad Jukebox, around 2001, that could hold 1,000 or more songs, a pretty sophisticated device. And yet, both companies failed to capitalize on the fact that simplicity, device, and scale would in the industry, as the Apple iPod came along years later, defining the space. A real trend missed opportunities.

What’s the lesson here? Two of them – don’t miss out on the future because of trend denial. And never give up on the future once aware of a trend – be prepared to always reshape your approach to it!

Oh, and that book I referenced? Long since out of print, it pretty much nailed everything that would happen with the Internet through the next 15 years. In that context, my life has been a series of massively missed opportunities – I could have been a part of so many big trends, a visionary-turned-startup venture capitalist or CEO. But in my defense, I chose to be a part of the process of raising my young sons with my wife, rather than chasing down a path of technology-startup stardom.

Today, my sons and their fiances and my wife are blessed with the opportunity of love. I think I made the right choice.

Sometimes, missed opportunities result in something even better.