.
Home   >   Auto & Transportation   >   Daily Inspiration: “Determination will get you everywhere!”

Daily Inspiration: “Determination will get you everywhere!”

“Determination will get you everywhere!” – Futurist Jim Carroll 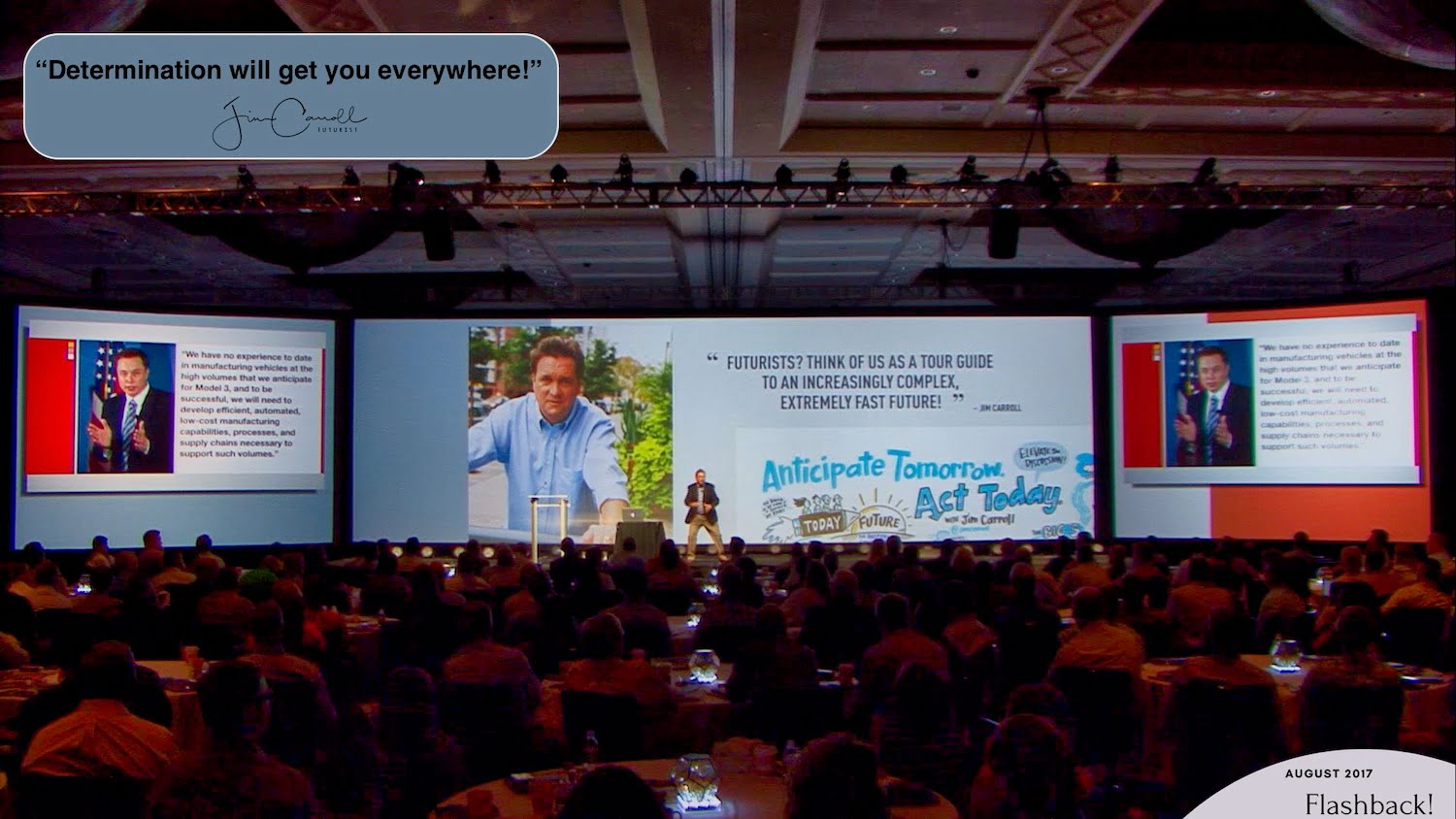 In case you didn’t notice, Tesla hit a $1 trillion valuation yesterday – the fastest such rise in history. 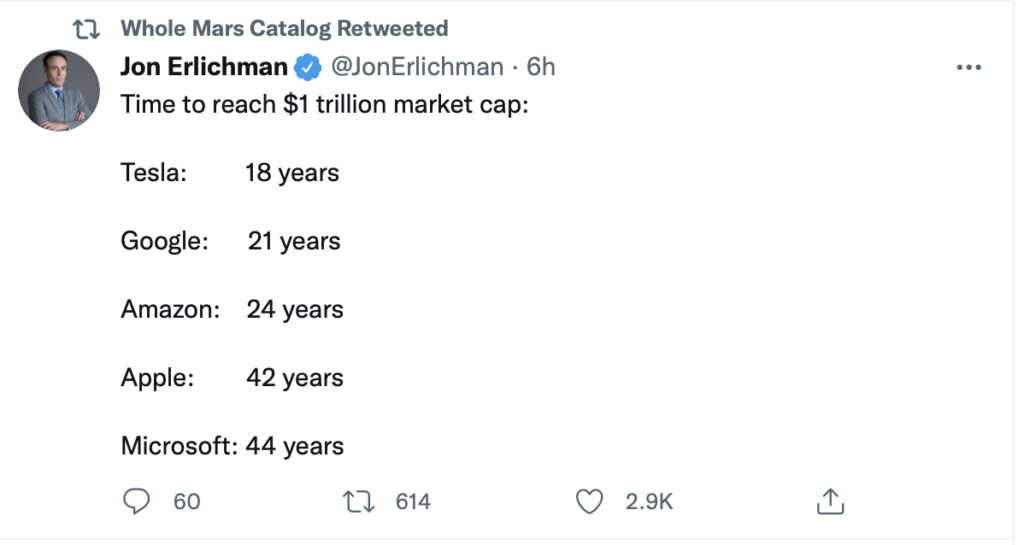 Back in 2016 and 2017, though, when I was talking on stage to manufacturing and automotive companies about the company, the feeling was mixed. Consider the stock price trajectory since then.

The photo used in today’s quote is from a manufacturing conference I spoke at in 2017. At that point, many manufacturing executives were deeply skeptical of Tesla’s plans to bring the recently announced Model 3 to market. It had no skills or background in large-scale production, and the world of seasoned professionals was deeply skeptical.

Check the slide on the screen beside me from the Powerpoint deck – it’s a direct quote from Tesla’s SEC filing of the previous year on their situation:

“We have no experience to date in manufacturing vehicles at the high volumes that we anticipate for Model 3, and to be successful, we will need to develop efficient, automated, low-cost manufacturing capabilities, processes, and supply chains necessary to support such volumes.”

It looks increasingly like they’ve mastered a fair bit of that skill set. Yet you might also have seen on the news yesterday that Hertz committed to 100,000 of that specific vehicle. It looks like they’ll continue to have to get better at it.

Elon Musk pretty much admitted this yesterday in a tweet. “Tesla is very much a production ramp problem, not a demand problem.” In other words, we have no problem selling lots of our cars, but we need to continue to figure out how to build more of them. Here’s the thing – if you go online to try to purchase one right now, you won’t actually see the vehicle until well into 2022. 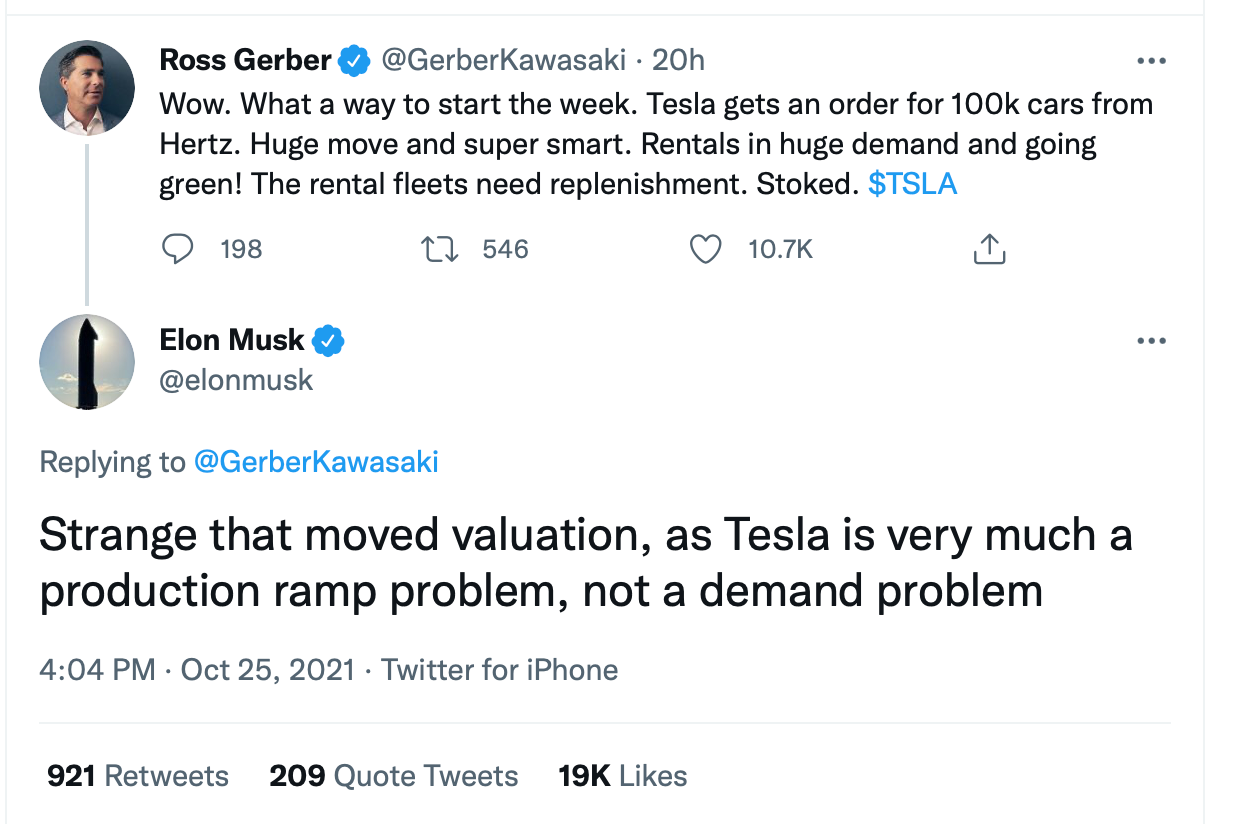 Is the Tesla valuation justified? Remember, stock market prices often don’t reflect current, but rather future realities. Right now, Tesla is so far ahead in the autonomous and electric vehicle automotive categories that it is almost laughable. And so while they were discounting its potential for success in 2017 and were proven wrong, it’s far more difficult to discount it today. Because what Tesla has proven is that determination is everything. “We have no experience,’ they said, ‘but we think we can get there.’

Here’s my original Tesla story from that conference back in 2017!