Home   >   Uncategorized   >   The Future, and the People Who Hate It : What Happens When People Tune Out From What Comes Next?

The Future, and the People Who Hate It : What Happens When People Tune Out From What Comes Next?

Over the last 28 years, I’ve appeared on stage worldwide at well over 2,000 events, in front of upwards of 2 million people. There have been small events of a few dozen, and many large-scale Las Vegas and other conference center events with 5,000 or 7,500 people. That’s a lot of insight shared! 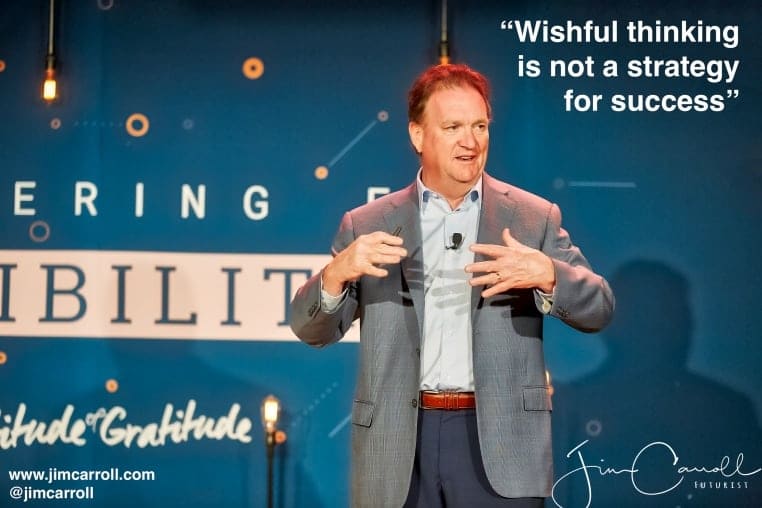 A guy like me lives and dies on the session evaluations, the after-keynote comments, the follow-up tweets or e-mails, and other feedback. It’s a mixture of the positive and negative, the glowing and the mediocre, and the occasional burst of outright hostility or wildly enthusiastic “you-changed-my-life-for-the-better” gushiness. I guess I can’t really have been successful this long if it hasn’t been mostly positive and laudatory. But even so, I’ve always taken the few negative comments to mind as a means of doing better the next time, an opportunity to move forward.

And then, around 2016, I noticed a shift, which was obviously closely aligned to the new political volatility — I started to notice an upward trend in the negative type of comment on the evaluations. Folks who didn’t like my message, the trends I covered, or the manner in which I presented it.

For a time, I worried about this. And then, I realized – it wasn’t about me. It was them. I’ve still been bang on with the trends; my stage style rocks; the people who want to align to the future listen carefully and act accordingly. But others simply …. tune out. And that number was increasing. Why was this so? Keep reading!

I really noticed this issue at first with a manufacturing conference I spoke at in Minneapolis, in October 2016, in front of a broad cross-section of mid-level manufacturing executives and engineers from throughout the Midwest.

My keynote covered the usual range of high-velocity trends providing opportunity and challenge within the sector – 3D printing and additive manufacturing, the acceleration of robotics, the arrival of augmented reality (such as for quality inspection), the Industrial-Internet-of-Things and process reinvention, the rapid arrival of new, lightweight manufacturing materials, the necessity for the rapid and continual reinvention of products in the face of faster product obsolescence, the arrival of hyper-connected, intelligent products and the impact this would have on manufacturing skills.

You know, the typical grab back of disruptive trends. I also provided a pathway for innovation and change that might help to turn these trends into opportunities, rather than threats.

The audience seemed to want nothing to do with this. I remember looking out at them, and thinking to myself – they’re not listening.

I remember thinking to myself:

“They’ve been sold the idea that a magic wand can be waved, and things will be great again. Except, the future doesn’t happen like that!”

What was going on? The expectation of how to get to the future was shifting; magic wand thinking was taking hold. Just one year later, the world was in a very strange place, and a con job was being pulled upon the populace in this region with the announcement of the Foxconn Wisconsin factory – a magical, $10 billion investment by a Chinese company to manufacture advanced LED screens in the middle of America. I immediately called it a fraud, as captured just a few months later in a post, “The Story Behind the Picture: 20 Big Rules for Economic Development in the Era of Acceleration!” Check what I had to say in point #5

Hey, have you seen the headlines? Did you notice a few months ago that the initiative has died? The Foxconn con is over, as is much of the great-again type of thinking except for some remaining feeble-minded holdouts.

Here’s what I’ve learned about our recent wild-ride: the magic wand doesn’t work. Wishful thinking is not a strategy. The politics that people are being sold doesn’t match the reality of the future.

Here’s a fact – the future isn’t easy. In fact, it takes a heck of a lot of hard work. But when people are being conned, they tend to ignore the reality of this advice. That’s what was happening with my audiences. Looking back to my event 5 years ago today, at a major manufacturing conference, it’s pretty obvious that my audience was starting to consume the drug that promised the buzz of the ‘the easy way out,‘ the elixir of a simple-minded just-build-a-wall-and-make-things-great-again type of thinking. Months later, the world would change as people came to cling to the belief that it was by ranting, screaming, yelling, and generally becoming that boorish neighbor that no one ever invited to neighborhood parties was a pathway to success. Gosh, we tired quickly.

Reality? Check the video as to what I spoke about at another manufacturing event right around the same time. It’s all about the importance of skills and knowledge in the sector as new materials, methodologies and complexities come into the industry. Hard work, major investments, time, and patience.

Here’s a fun comment I wrote when I shared this video some years back: “Many manufacturing companies, while currently enjoying success, are going to find it difficult to make their way out of it because they didn’t do what needed to be done in terms of skills investments….simplistic solutions are lousy bandaids – when you seek the easy way out, the real road to recovery takes hard work!”

Over time, I noticed that this type of negative thinking about the future seemed to fill more and more of my audience makeup – people who simply didn’t like a story involving the reality of the future, disruptive trends, and the era of exponential acceleration. I started to frame this thinking by diplomatically addressing it through a Jetsons/Flinstones analogy.

And so here we are today – as a futurist, it is painfully obvious that a large cross-section of the populace simply has no interest in understanding the future. They’ve tuned out, carefully constructing their own magical, fictional future; they create their own false reality because it makes it easier for them to avoid the real reality. There’s no need for hard work, they think; no requirement for skills upgrading; no demand to do the difficult effort at reinventing. If they simply ignore the future … it will go away.

The thing is, it won’t. The future has a simple rule: it’s going to happen, whether you like it or not.

Back to my session evaluations: what I’ve come to learn is that it was not anything I was doing on stage – my style, extensive content, and customization had not changed much. What has changed is the audience and a certain belief that a mindset of anger would be enough to take a region into the future. I’ve spent a lot of time thinking about these people – and the mindset that drives them. They are conflicted, in that they share these traits:

I could go on; I’ll build up this list over time. It’s sort of like my Innovation Killers theme, which is worth a look.

Except, the implications for companies, economies, and people are far, far worse.