Home   >   Uncategorized   >   Daily Inspiration: “Serendipitous creativity: it’s from that momentary bolt of insight with that flash of inspiration!”

Daily Inspiration: “Serendipitous creativity: it’s from that momentary bolt of insight with that flash of inspiration!”

“Serendipitous creativity: it’s from that momentary bolt of insight with that flash of inspiration!”– Futurist Jim Carroll 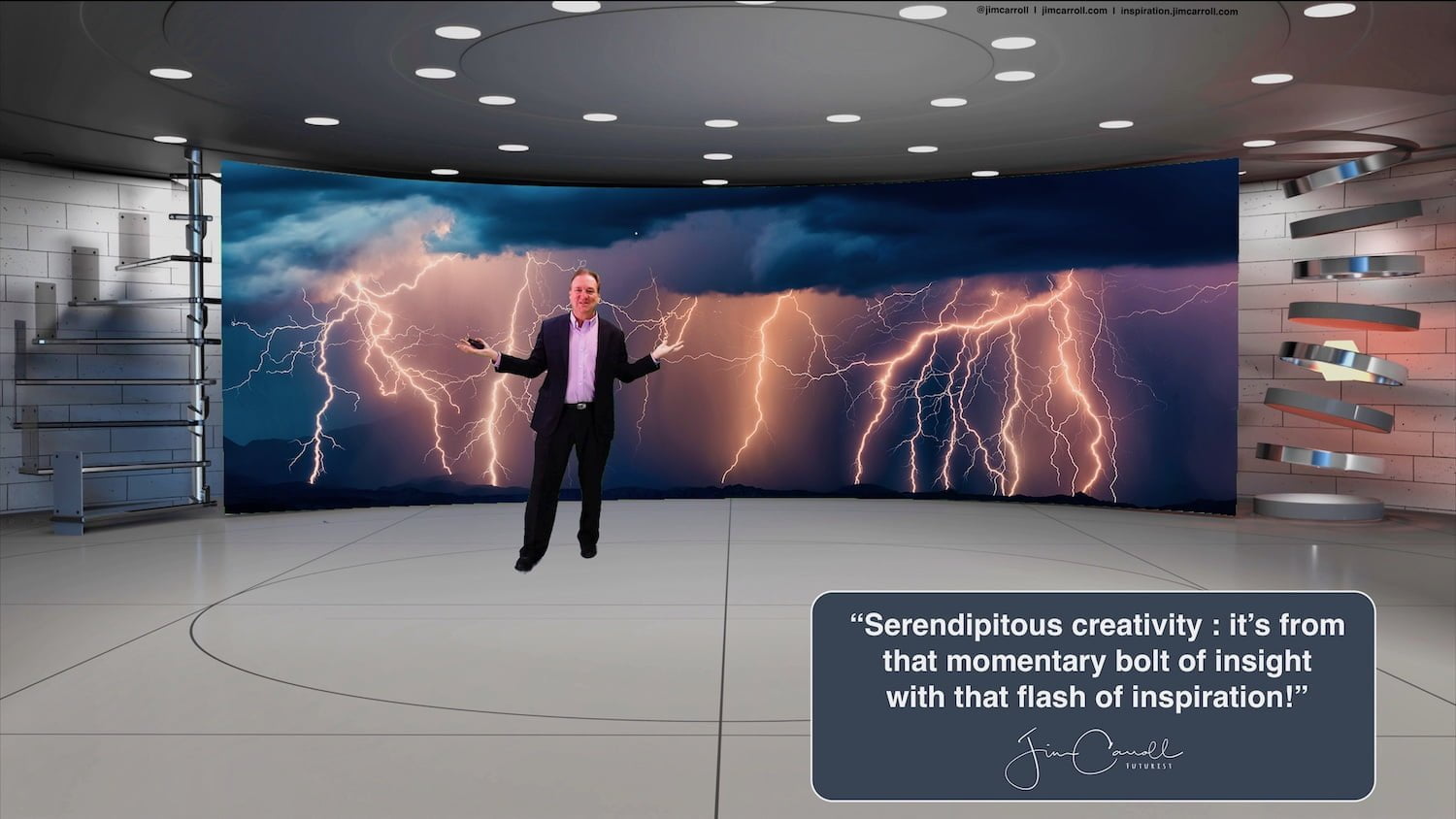 Well, it’s not hard to guess that I woke up to a distant thunderstorm early this morning, which then worked its magic around me while I tried to find the inspiration for todays’ Daily Inspiration!

Here’s one thing I know: it’s better to have your mind aligned for serendipity than to plan for continuous certainty! That’s because *nothing* is absolutely certain anymore – your tomorrow will be ruled by the unexpected, impacted by the unanticipated, and rocked by that which was completely unknown.

If the volatility that comes from uncertainty is our new normal, how do we turn this into an opportunity? By using happenstance as an innovation foundry! Be ready for anything. Align yourself to uncertainty. Respond to volatility.

And when a happenstance moment appears that leads to opportunity, run with it!

History proves to us that living a randomly serendipitous life can often bring moments of inspiration!

Serendipity? Penicillin was discovered because of some dirty dishes! A scientist in Scotland discovered a strange fungus in a bowl in the sink that killed off all the surrounding bacteria. Thus was born modern medical science!

It happens all the time. The research scientist working with a microwave-emitting magnetron – used in radar during World War 2 – discovered that it melted the candy bar in his pocket. Hence, the kitchen appliance of today! The Slinky? It was originally invented to keep instruments on ships from rolling about – until they discovered that it was kind of a fun toy too! Velcro came about after a Swiss engineer tried to figure out why burrs were sticking to his dog and saw the tiny hooks embedded in their structure when examined through a microscope.

Super Glue? It was originally a project to develop better gunsight and airplane canopies during the war – but the new substance stuck like crazy to everything it touched. Whoops! Play-Doh? It was originally invented to serve as a cleaning product, for dirty wallpaper. Except kids discovered they could do really cool things with it!

The ultimate random discovery? Post-it Notes! A 3M engineer was trying to invest in a new super-strong adhesive, but what he came up with was super-weak instead! Another 3M scientist, years later, was trying to keep some notes in a choir book at church and used the substance to attach bits of paper to the book so they could be removed later. Bingo!

The point is this – sometimes, you can plan for the future all you want, but even so, sometimes it just happens!