Daily Inspiration: “It’s the jobs that do not yet exist that you really need to prepare for!”

“It’s the jobs that do not yet exist that you really need to prepare for!” – Futurist Jim Carroll 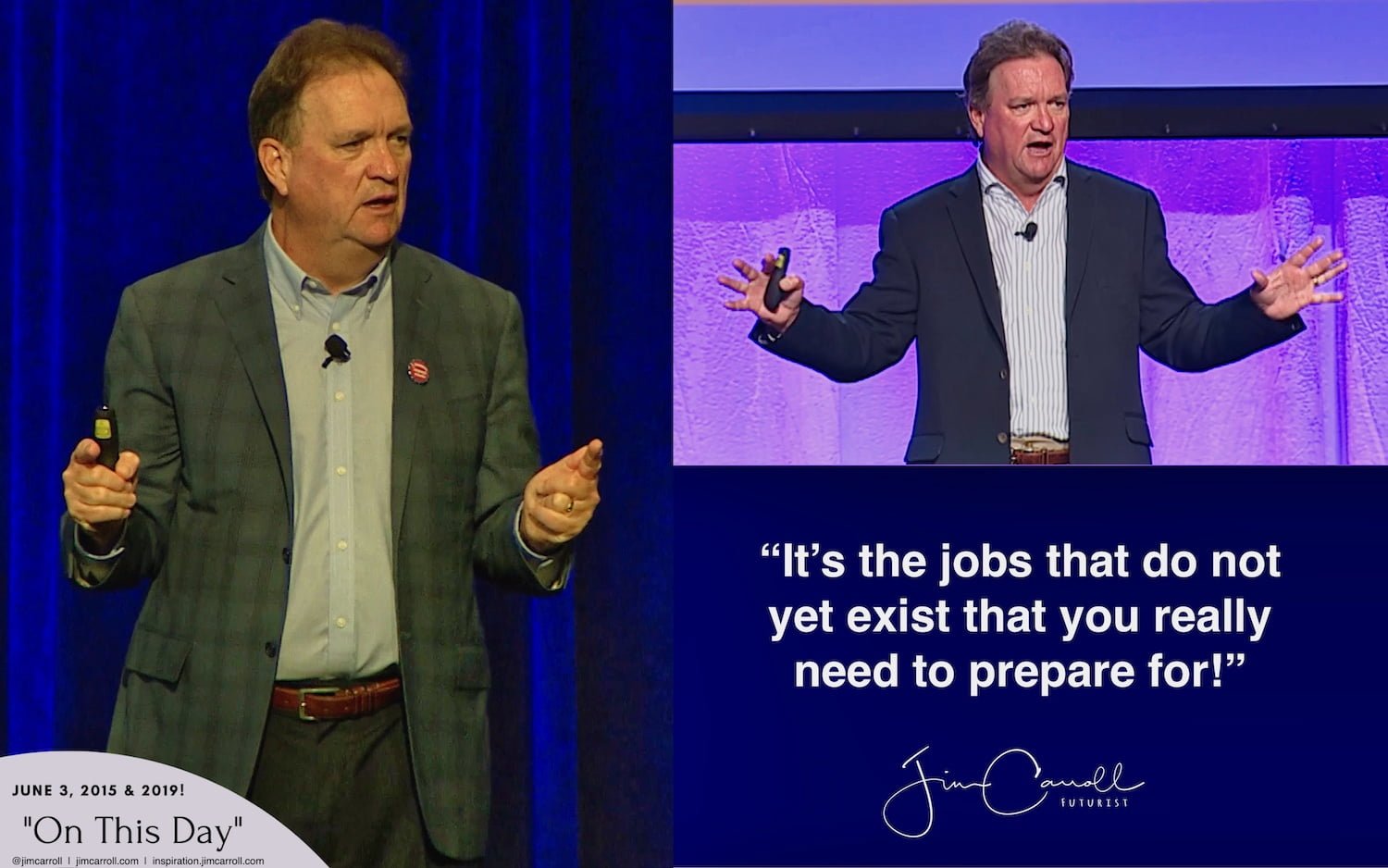 It’s not often in this line of work that you get booked by the same client on the exact same day just a few years apart!

I guess they liked my message!

That was the case on this day in 2016 and 2019 with the  Career Education Colleges and Industries group, previously known as the American Society of Private Colleges and Universities. The first event was their annual conference in Denver, and the second exactly four years later to the day in New Orleans. In 2015, I covered future knowledge trends involving careers, professions, and specialized skills; the second built upon that theme with a solid plan for enhancing and accelerating the education system.

There was a LOT of different content to each keynote, but I opened both events with a key bedrock quote that I’ve used for almost every keynote for close to 25 years – that 65% of kids in pre-school today will work in jobs or careers that do not yet exist. Here’s that opening in context:

I originally came across the prediction way back in 1997 in an Australian study; the original source material has long since disappeared.

Since then, this statistic has become a bit of a meme in the education, skills, HR, and knowledge industries; it was even often quoted throughout the Bush and Obama administrations. The fun part is that over the years, a few groups have tried to track down the source of the quote, and have made their way back to me; my original citation source has long since disappeared. Some take umbrage with the observation, demanding proof and scholastic attribution, which seems kind of quaint in the world of today in which it seems anybody can make up anything they like.

That key statistic has been one of three observations that I’ve often used to set the tone for my keynotes and the idea of accelerating change – the other two being that 1/2 of the knowledge for a typical college degree is obsolete or revised by the time of graduation and that most products are now obsolete within just a few years of release. Here’s another highlight clip of my first few minutes on stage at a manufacturing event in Chicago, setting the tone early on:

In New Orleans, I kicked things up a notch – check out this bold assertion as to what we really need to do to align to a faster future.

New jobs? New careers? I have no problem suggesting a few; there are dozens. Here’s five to start your day thinking about:

Reality? My son works as a drone pilot – a location intelligence professional. And with Covid-19, we’ve seen the emergence of vast numbers of analytical architects.

The future? It’s big, it’s bold, and it’s happening all around you!