Home   >   Auto & Transportation   >   Daily Inspiration: “Control of the speed of innovation in every single industry is now being set by Silicon Valley!”

Daily Inspiration: “Control of the speed of innovation in every single industry is now being set by Silicon Valley!”

“Control of the speed of innovation in every single industry is now being set by Silicon Valley!” – Futurist Jim Carroll

(I had a bit of fun at the soundcheck the day before, with Vegas being Vegas after all – you’re always guaranteed a great stage! It’s an infinite me!)

And the fact is, most car companies can’t keep up as the speed of change shifts to the speed of Moore’s law and Silicon Valley.  That was the main theme of my keynote this week in 2017 for the CUDirect Automotive Lending conference in Las Vegas.  This event took a look at the future of automotive lending with a particular emphasis within the credit union sector, which is the line of business that CUDirect is focused on.

I was there to set the opening tone to put into perspective the stark reality of the disruptive change that is underway. Have you ever thought about what happens to resale values when a car of 2020 is something from the olden days in 2022 because it’s already using old technology? That’s our reality, and it’s happening today.

Shortly after the keynote, Credit Union Magazine ran an article covering the main issues I outlined on stage.

Innovate Now – The Future is Coming Quickly
May 2017 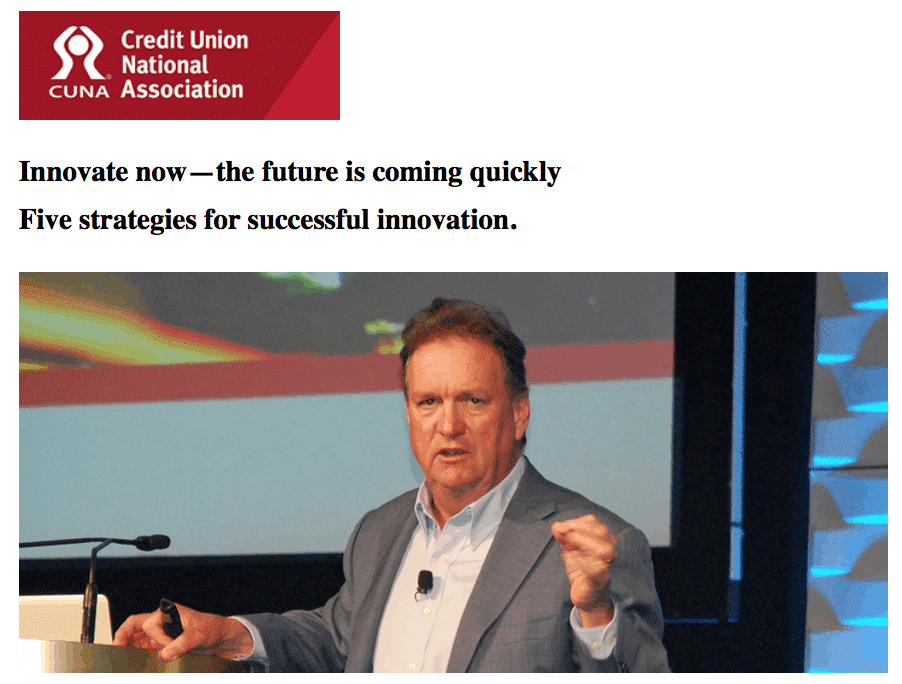 It’s the technology we see depicted in “The Jetsons,” a cartoon from 1962 that depicted the life of a futuristic family. But we’re already seeing much of the technology today, more than 40 years before the cartoon takes place in 2062.

“It’s staggering to think how quickly the world around us is changing,” says innovator and futurist Jim Carroll, who addressed CU Direct’s Drive 17 Conference Wednesday in Las Vegas.

The technology in The Jetsons is just another reminder that credit unions need to innovate and not only develop new products, but also transform to keep up with the speed of change, Carroll says.

Given the fast pace of change, more than 80% of conference attendees believe their current business model will not stay the same in the next 10 years due to the significant disruption.

“We need to deal with the innovation killers which hold us back from pursuing the opportunities of the future. The future is coming at us with greater intensity and great speed,” Carroll says. “We need to think big, start small, and scale fast.”

Innovators need to make big, bold decisions to be transformative. This is the only way credit unions will be able to counter the impacts that disrupters, such as fintech companies, have, Carroll says.

Think of Tesla, Carroll says, which has transformed the auto industry by manufacturing vehicles on demand and have placed their dealerships in retail shopping areas rather than in stand-alone structures. Some 400,000 people have signed up for these vehicles, he adds.

2. Presume that everything will speed up

Credit unions are not the only industry struggling with the speed of technology.

Technology is rapidly changing in vehicles, says Carroll, who believes Siri or Alexa buttons, augmented reality screens, vehicle-to-vehicle communication, and payment technology embedded in the dashboard may be featured in vehicles by 2020.

For credit unions, think about how biometric scans can be used at ATMs.

3. Align to Moore’s Law of innovation

This law says the processing power of a computer chip doubles every 18 months. Technology is constantly changing and is becoming embedded in more items, such as garage doors, ceiling fans, and even grills, Carroll says.

Hyperconnectivity is becoming the rule.

Credit unions need to be aware of the expectations members have for personalization, their use of technology, and a desire for real-time support or interaction when needed.

“You need to be prepared to innovate quickly,” he says.

Mobile devices have a huge influence on people’s purchasing and financing decisions. Research shows the average consumer scans 12 feet of shelf space in a second, and 80% would leave a store if they must wait more than five minutes to pay.

Determine ways to grab your members’ attention and provide solutions faster, in addition to providing a way for members to interact online, Carroll says.

5. Realign to the impact of generations

Recognize how younger generations live their lives. Don’t cling to a routine or process just because that’s the way your credit union has always operated.

Millennials, for example, have been weaned on technology, speed, and innovation, and are open to transformations and changes that take this into account, Carroll says.