Home   >   Covid-19 & Moving Forward   >   Daily Inspiration: “Covid-19 is a once-in-a-lifetime reset button for your future. Are you discovering the opportunity?”

Daily Inspiration: “Covid-19 is a once-in-a-lifetime reset button for your future. Are you discovering the opportunity?”

“Covid-19 is a once-in-a-lifetime reset button for your future. Are you discovering the opportunity?” – Futurist Jim Carroll 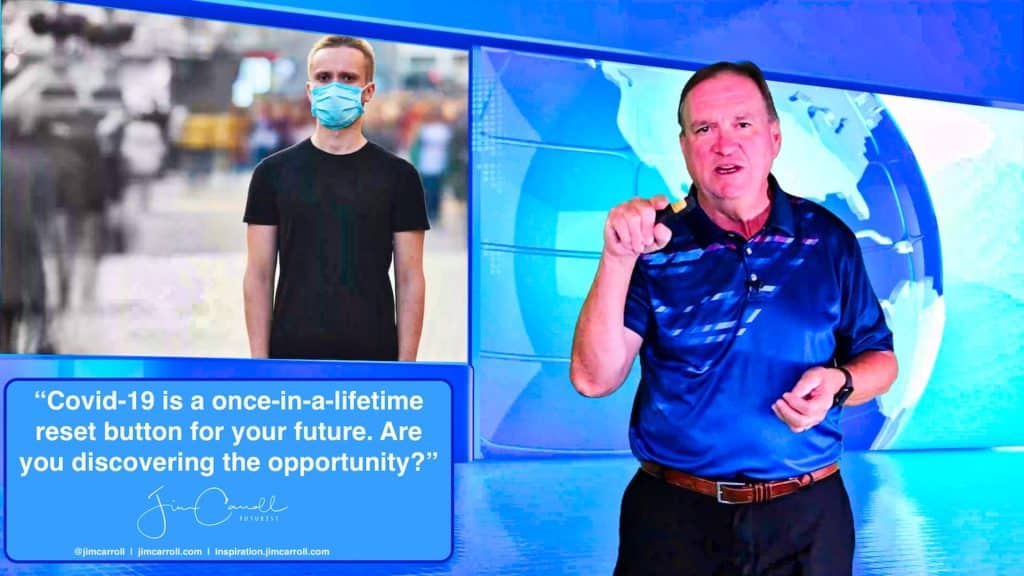 At some moment in time – it was probably late March as reality settled in – it became pretty evident to me that I would not be back on the road, on a stage, for a LONG, LONG time.

At some moment in time – it was probably mid-April – that I came to realize that I might never actually be back on the road, on the stage, in the way that I was before – 40 events, worldwide, for massive, exciting and global conferences.

At some moment in time, I knew that most other speakers in my position didn’t have the technical insight or the drive to build out a home studio infrastructure like I could – being a hard core computer geek since 1982.

At some moment in time, I realized that I could offer up a fascinating virtual stage experience, while most of my competitors looked like a hostage in a hostage video…..

At some moment in time, the future I had planned was, simply put, over.

The days of zipping off to Paris to share my insight on the future with one of the world’s leading pharmaceutical companies? Gone. The opportunity to walk onto a fantastic stage set in Las Vegas in front of 5,000 people? Gone. The reality of planning a two week vacation trip to Singapore around a potential keynote event for one of the world’s largest banks. Gone.

I think I probably had a short period of mourning for my future, but I was too busy working in my home broadcast studio trying to figure out how to do things!

I quickly came to realize that if my old stage life was over, I pretty much had to invent a new one.

And to be honest, six months in, I’m kind of liking it.

What do I miss? The enthusiastic response from an audience throughout and at the end of my keynote. The excitement of walking onto a big, beautiful stage during sound check and thinking, “I own this for a time.” The joy that came from a few moments of interaction with folks after my talk, hearing their enthusiastic comments that I have somehow shaped their future. The thrill of sharing the marquee at an event with ex-Presidents and sports figures, celebrities and personalities. The certainty of a steady stream of bookings to keep the business intact….

But, that reality is pretty much in for a long pause, and I’ve got a new reality.

I’m making the most of it, firing my home virtual broadcast studio on all cylinders.

What’s your plan? This is the greatest reset opportunity of all time – and if you aren’t chasing it, you aren’t aligned to the reality of your future.