Home   >   Covid-19 & Moving Forward   >   Daily Inspiration: “….there’s a pretty strong certainty that your impending failure is because you are in complete denial of your reality….”

Daily Inspiration: “….there’s a pretty strong certainty that your impending failure is because you are in complete denial of your reality….”

“Let me put it this way: there’s a pretty strong certainty that your impending failure is because you are in complete denial of your reality, a captive to your delusions, a prisoner of your expectations, and a subscriber to the massively irrational and ridiculously illogical!” – Futurist Jim Carroll 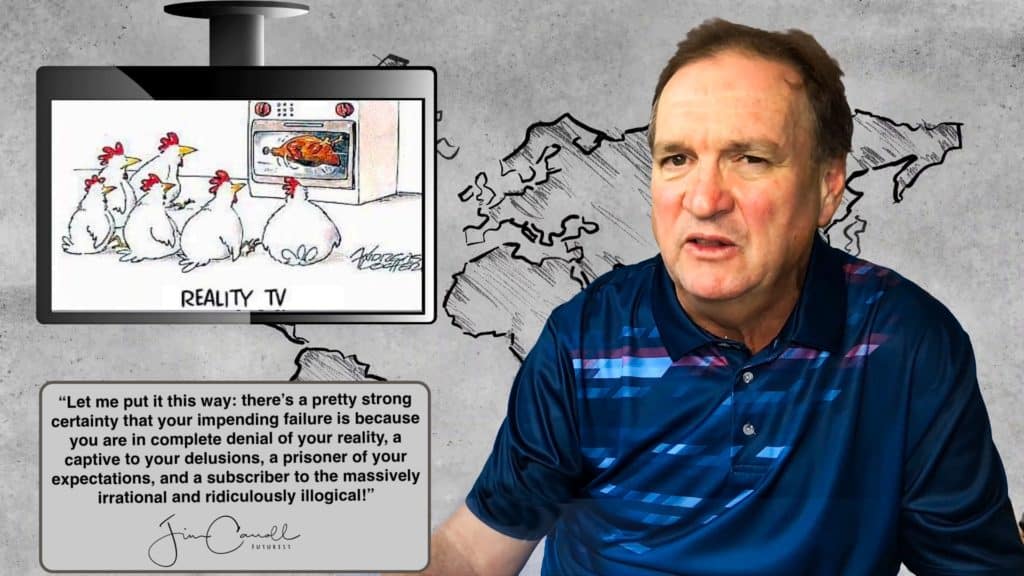 Since mid-2015, the chicken slide had become the only diplomatic manner by which I could somehow reconcile the reality of the future against the fallacy of how easy it might be to make things great again. Over a period of time, up until the pandemic hit, I could use it for a reliable round of laughter in those regions who think that science is a thing, and glares of hate from those who seek their future in the vapid soul of a failing religion.

I used it again last week in the home studio in a short little broadcast I did: give it a watch if you’d like to comprehend how far the mighty have fallen. We are now in a world in which CEO’s of major drug companies have to come out and basically make a statement that, well, science is kind of important.

The future? I will admit that I didn’t have “massive disbelief in the fundamentals of science” on my ‘2020 trends’ bingo card a decade ago. I never anticipated that some people would think the scientific method was part of an evil plot. Worse yet, I never perceived that a once great nation would see mass psychosis take hold, with armed vigilantes restricting the ability of people to visit their local polling station to vote.

But, here we are.

What’s the motivational part of this quote? It’s kind of hard to see, isn’t it!? Yet, for every other nation on earth, it’s pretty close to that time in which it is necessary to fully commit to forging a new path to the future, and to go it alone and together in redefining what comes next.

The fascinating thing is that despite the insanity that rules one part the world, a potentially disruptive and opportunistic future still exists. We can still work to save the planet through an ongoing investment in clean energy; solve some of the massive healthcare challenges such as Alzheimers and cancer despite the ongoing battle against Covid-19; energize the reinvention of industries with advanced robotics and autonomy in response to the pandemic; and align ourselves to the acceleration of the scientific trends which are still so much a part of our world.

The future is still out there. It’s just that there are some who are choosing to take part in it, and others, well, we really don’t know.