“Your best strategy for the future? Avoid pathological denial of reality, aggressive arrogance, compulsive complacency, an unwillingness to confront the truth: these are all the signs of ongoing leadership failure!” – Futurist Jim Carroll 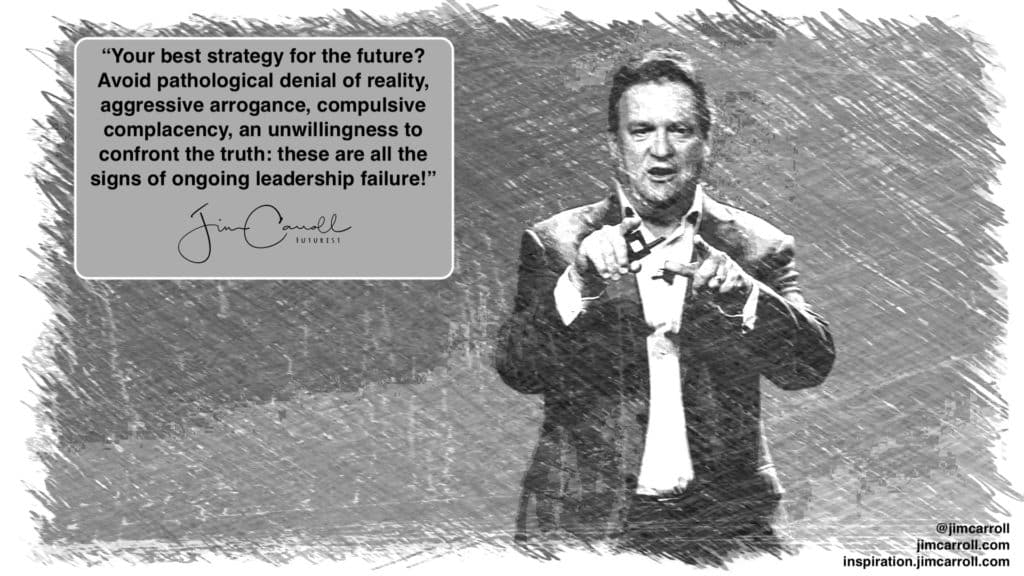 One of the most interesting aspects of history is that you often don’t know you are living through an era of seismic change until you are well out of the other side. Few could grasp the far reaching implications of Pearl Harbour as the defining moment in which the world order would change for the next 50 years; that 9/11 would lead to a huge dent in the world’s march towards global cooperation and tolerance; that a small connection between two computers in the 1970’s that defined the Internet would lead a massive world of disinformation and the rejection of science.

We’re living through that moment of time right now, and history is yet to be written. Somewhere in the bowels of the Lubyanka, there is an FSB, ex-KGB officer cackling with glee at their ability to send a once great democracy into a state of abject failure, unable to do what other nations have done with Covid-19. Driven by misinformation, ripped apart by abject lunacy, frozen into a state of foolishness, we’re witnessing death by design,  as people are subjected to the very risk of their lives  — because others think that ‘freedom’ means that science is just another conspiracy.

Have no doubt – these are seismic events unfolding in real time, and history is yet to be written. It either has a chance to work, or it’s going to be incredibly bleak.

Someday, hopefully, you’ll tell your grandkids what you saw while it was unfolding.