Daily Inspiration: “The future won’t wait for those who are stuck in the stages of shock, anger or denial – move to acceptance!”

“The future won’t wait for those who are stuck in the stages of shock, anger or denial- move to acceptance!” – Futurist Jim Carroll 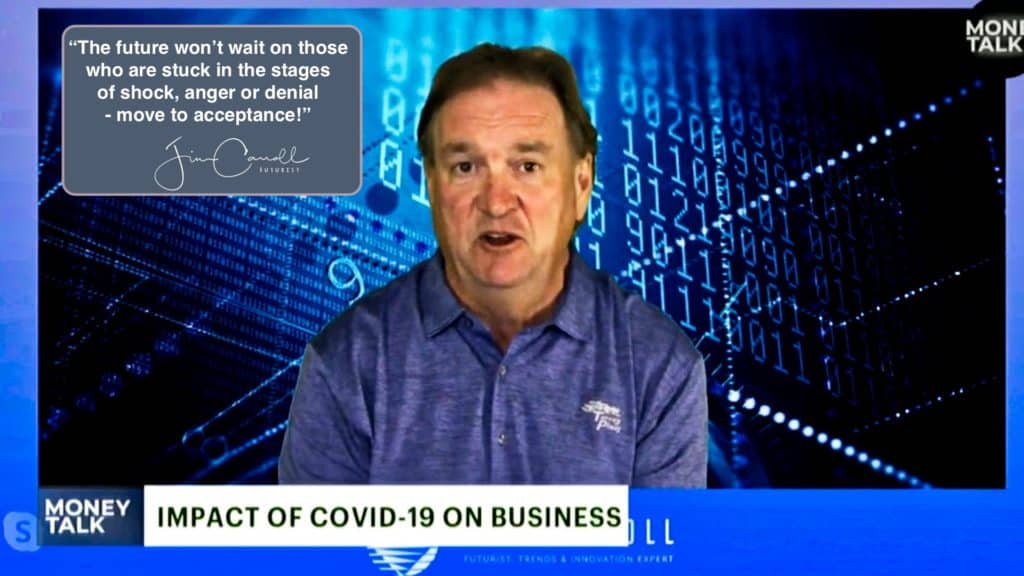 I was on Bloomberg Money Talk last night with a long interview about how companies can innovate through an era of economic uncertainty – the video is in the next blog post.

Back in the 90’s, when I was churning out books about the Internet with my good friend Rick Broadhead, my media life was kind of crazy. The Internet was such a new phenomena, and the news media was so hungry for a story, that I actually had TV crews coming to my house on a regular basis for interviews. My babies – two young sons! – were waking up in the morning, coming out f their rooms, and bumping into a crew of 5 people standing out in the hallway. (A producer, sound guy, and some others – this was back in the day before the crew became one person with a camera.)

At the same time, I was being interviewed at a crazy pace by radio and print – at one point, I counted up over 3,000 print interviews from a box of clippings my wife and I had put together. (My book publicist would send me these on a regular basis.)

I was doing book torus, with up to 14-16 interviews while hitting a city – first the morning shows, then the mid-morning stuff, and finally wrapping up the day with the supper news show. I’d be doing 5 or 7 cities in a row as part of a new book tour launch …. and it was exhausting, because you were just repeating yourself ad naseum.

And then, I just became so tired of it. After the dot.com collapse, I had to work furiously to reinvent myself (just as I am now.) The media stories were becoming more shallow, the demands for sensationalism more prevalent, and the show structure more annoying. I hit my limit when I went on a CNBC show and the producer wanted me to become part of the new style of American news TV by doing a bit of screaming and yelling. No thank you.

And so I became far more selective in what I did and who I was willing to talk to. I also went global – it was more fun to talk to the UK’s Telegraph, Dubai’s Capital Magazine or South Africa’s The Star. It was far more interesting to talk to a broader, international audience of big thinkers than a small audience of narrow minded individuals. The world was becoming my stage as my keynote business was going global, and I was working the media as it happened.

But news was becoming more sensational, I wouldn’t play the game, and so opportunities were not terribly vast.

And now, all of a sudden, it’s fun again!

I’ve had a few interviews like this over the last few weeks, including one early morning news show out of Istanbul on the future of robotics and manufacturing. There’s lots to talk about, with all kinds of new trends and leadership issues evolving at a furious pace. And not only that, my home broadcast studio is primed for opportunity – I can easily swap in backdrops and context clips at the drop of a hat!

And just like I cover in my 7 Stages of Economic Grief, which was covered in this news show, I long ago moved on to the ‘acceptance’ stage!