Daily Inspiration: “Innovate! Learn to release the handful of creative lightning stuck inside your head!”

“Innovate! Learn to release the handful of creative lightning stuck inside your head!” – Futurist Jim Carroll 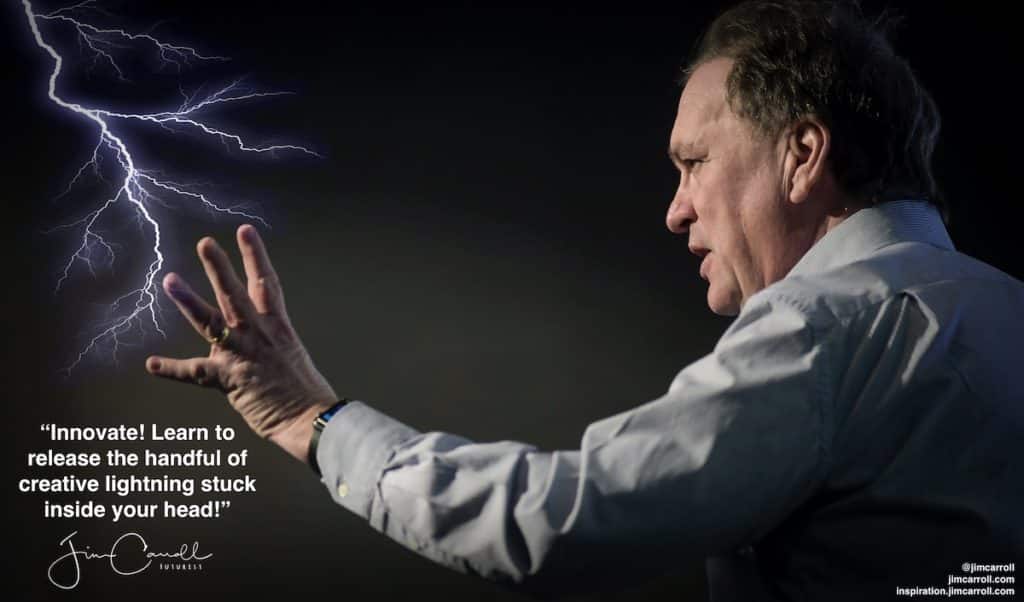 I was out for an early round of golf one morning, and managed to find myself first out of the starters block.18 holes in but 2 hours and 4 minutes! A runaway rabbit!

Since I was on my own, I fired up my favourite online music source, Radio Paradise – it’s a fascinating, eclectic odd mix of all kinds of different music. And while coming up hole #16, the song Long Way Home by Norah Jones came on.

I was already deep in thought during my round about the taping I was going to do that afternoon in my home broadcast studio – as I sometimes will comment to people, I sometimes get lost in the thoughts rolling around in my head. I’ve been trying to come up with more creative ‘set design,’ tighter, more focused messages, innovative concepts in delivery. My stage is but 6×10, and I’ve got to learn to squeeze a lot of big creative insight into but a small creative box.

And then came the line in the song:

Got a handful of lightening….

I stopped, grabbed my phone, and quickly typed in the phrase. Yet what is often said and what I hear is often very, very different – my wife would tell you that with certainty – because I swear I heard the phrase ‘handful of creative lightning.’ When I looked up the song later, there was no ‘creative’ to be found.

It was one of those phrases that I thought captured the essence of innovation … and creativity.

Creativity? At some moment in time, we all have it – some with music, others with art, many more with writing or their ability to tinker with mechanical tools and do something magical. Creativity is one of the greatest gifts that we might be imbued with, and yet it is often hard to find, impossible to generate, blazing fast in how it might come out of nowhere, and frustrating when it disappears.

Worse yet, when it does suddenly come out of no where, it can be difficult to release it, grab it, keep it, remember it.

In other words, it can often get stuck inside your head.

But when it makes it’s fleeting appearance, it’s magical!

And that’s why, if you ever see me on a golf course suddenly stopping in the middle of the 16th hole, typing madly into my phone, it’s because I am, for but a moment, releasing a small bit of the magic creative lightning that often seems to be stuck inside my head.