Daily Inspiration: “The seven stages of economic grief are very real, but it’s how you move through them that matters!”

“Shock, anger, denial, anger, bargaining ….acceptance. The seven stages of economic grief are very real, but it’s how you move through them that matters!” – Futurist Jim Carroll 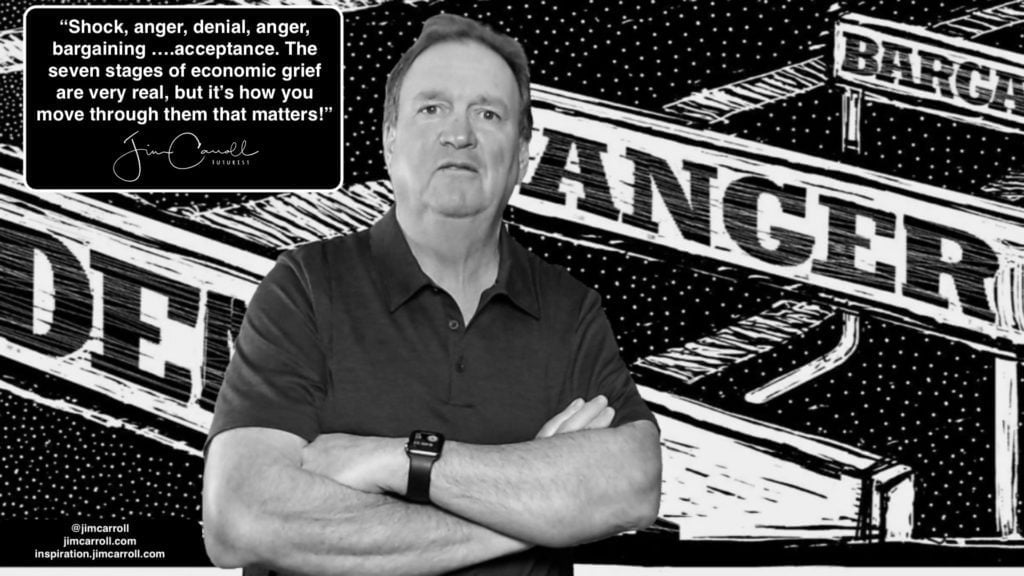 Hey, do you remember your life but just one month ago? It seems like forever!

I was getting ready for a trip to Las Vegas where I would appear on stage as the opening keynote speaker for a massive conference – in the midst of a few thousand people! Right now, the desire to be in with a large crowd has disappeared – I’m working in my home office, focused on trying to move through these ‘interesting’ times.

At a similar point in 2008, I wrote this into a blog post – “The 7 Stages of Economic Grief: When Do You Innovate?”

The seven stages of economic grief – when do you innovate?

It’s interesting to look back to see what I wrote, since the same thing is happening right now, except – there’s a lot more to the shock phase!

“Here’s what I think is going on: there are many organizations entering a state of absolute paralysis. Idea factories are being turned off. The result is that we’re not just entering an economic recession — we’re entering another idea recession, similar to what occurred with the last downturn starting in 2001.

What is so different time is the absolute speed with which ideas are shutting down — the paralysis in some organizations at the leadership level is absolutely stunning. This got me thinking about the fast paced events of the last few weeks in the context of the seven stages of grief.

I came to realize, things have happened so fast that many organizations still find themselves in the “shock” and “denial” phase. They’ll be the innovation laggards.”

I find myself talking and thinking about that post these last few days and the various stages along the way. Just when you think you’ve got one nailed and you’re ready to move on, you wake up and something new has happened!

I’m working hard to make sure that I’m in the acceptance phase, because I believe that matters. Are you?