Daily Inspiration: “You wouldn’t need to think outside the box if you took the time to design your future the right way in the first place!”

“You wouldn’t need to think outside the box if you took the time to design your future the right way in the first place!” –  Futurist Jim Carroll 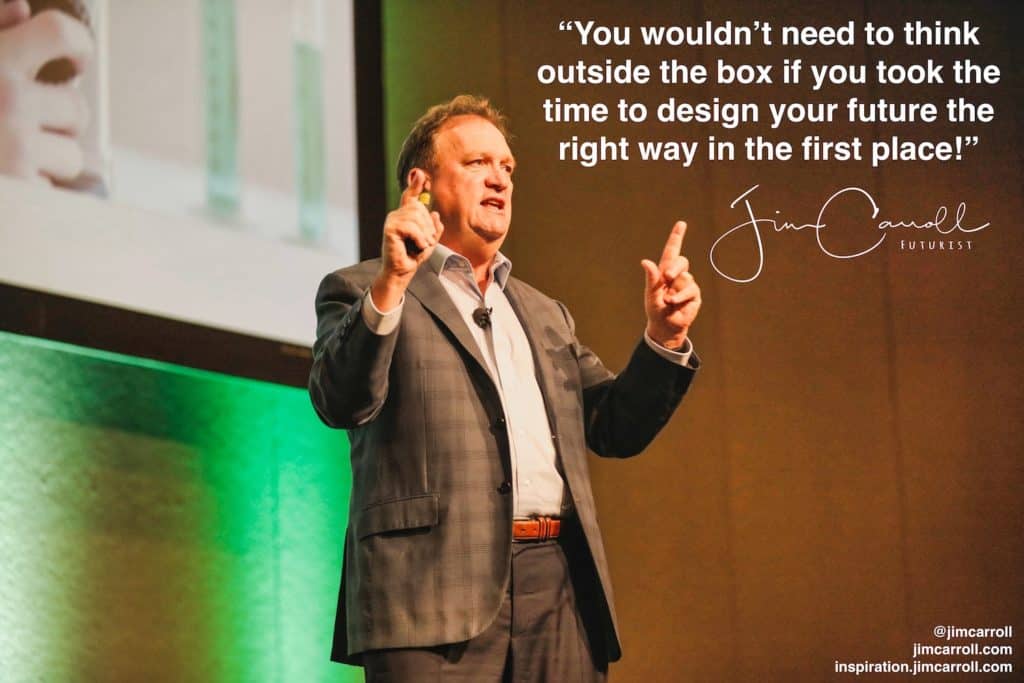 And so we arrive on one of the most mysteriously named holidays in the Western calendar – ‘Boxing Day’ – colliding with the opportunity to toy with one of the most overused motivational business cliches of all time: “think outside the box!”

I couldn’t resist, but think about my observation: isn’t it true?

Organizations spend a crazy amount of time and vast sums of money attempting to get their people to think differently about things – it’s true! How many times have you been to a meeting and a speaker on stage is demanding that all you need to do is ‘think outside the box’ and magic will happen!

I honestly believe that in my 25 years on stage, I have never used this cliche. I’ve probably told people to just throw the damn box away.

Wouldn’t organizations do better with the ‘box problem’ if they got their people thinking differently in the first place?

The need to think ‘outside the box’ comes about most often because a company, and the people who work for it, find themselves in a place that is quite different from what they expected it be be. With the result that when they get there, they are unsure of what to do, how to think, and what actions they should undertake.

I played with this concept a year ago in my daily quote, observing:

“You’ve been told to think outside of the box, to drop the box or break it, to get rid of the box, think without the box, create a different box, or turn the box into something else! Here’s a better idea – maybe you should just think!””

Maybe if you just try to understand where you are going before you get there, you’d find that you aren’t boxed in! And so with that, there would be no need to think outside the box. Heck, there might not even be a box that they need to think their way out of.

It seems kind of obvious to me.