.
Home   >   Uncategorized   >   Daily Inspiration: ““Worrying about your future won’t prevent it. Embracing it will let you change it!”

Daily Inspiration: ““Worrying about your future won’t prevent it. Embracing it will let you change it!”

“Worrying about your future won’t prevent it. Embracing it will let you change it!” – Futurist Jim Carroll 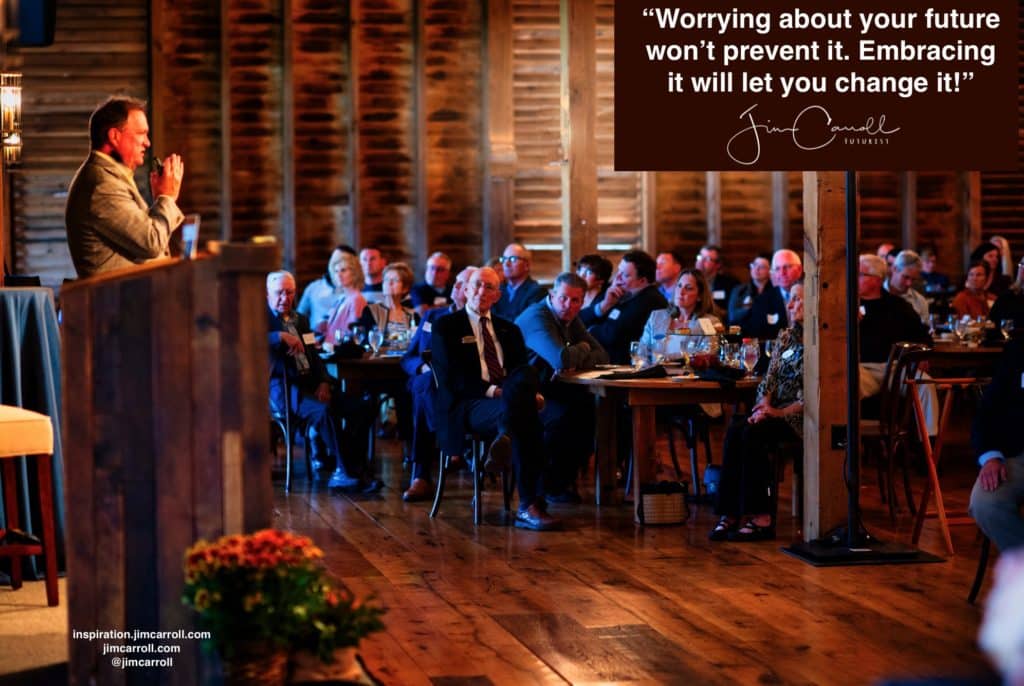 Fear has always driven the global change agenda, but today, is at the root of much of the current political turmoil that we find around the world.

More so than in previous times – and that is due to the overwhelming speed of change that makes people feel like they are completely out of control of anything. Fear rather than focus rules their agenda.

At least that’s my persecutive from discussions with many of my clients in the lead up to my keynotes. People are worried about artificial intelligence and robots taking away their jobs; they are apprehensive about the massive changes that Amazon and online retail is causing to their local shopping malls; they worry that self-driving cars and other big industry transformations are happening too fast, and go too far. The list goes on.

The result is that they vote with fear, steer their efforts to prevent progress, and turn their mind away from the future. They are driven by their fear of what comes next, and lack the motivation to be inspirited by the opportunity.

That’s why I’ve characterized our current reality as being a world that is caught between the Jetsons and the Flintstones.

No where is this contrast more clear than with the practice in which people are ‘keying’ Tesla vehicles, and in some cases, actually aggressively steering into Tesla vehicles to try to force them off the road.

Look it up – you’ll find countless articles and cases where this is happening. Why? Maybe because a Tesla, for them, is the perfect symbol for people caught in the past. Why can’t we live like it’s 1950? Why can’t we just have those good old coal mine jobs back? Why can’t our local shopping mall just stay the same? Why do need these stupid new fangled fancy computer cars? (The new Tesla cybertruck will absolutely send these people off the rails….)

Somehow, in their mind, these activities of vandalism lets them fight back against the great unknown enemy known as the future – to no real practical effect.

And yet, the future is going to continue to barrel forward at a speed that is relentless, ongoing, and overwhelming. Those who will come out best on the other sad recognize that reality, and work hard to to turn it into opportunity.