Daily Inspiration: “The biggest problem with the information age is that everybody is busy making up their own information!”

“The biggest problem with the information age is that everybody is busy making up their own information. We’ve entered the ‘era of disbelief,’ and it won’t end well!” – Futurist Jim Carroll 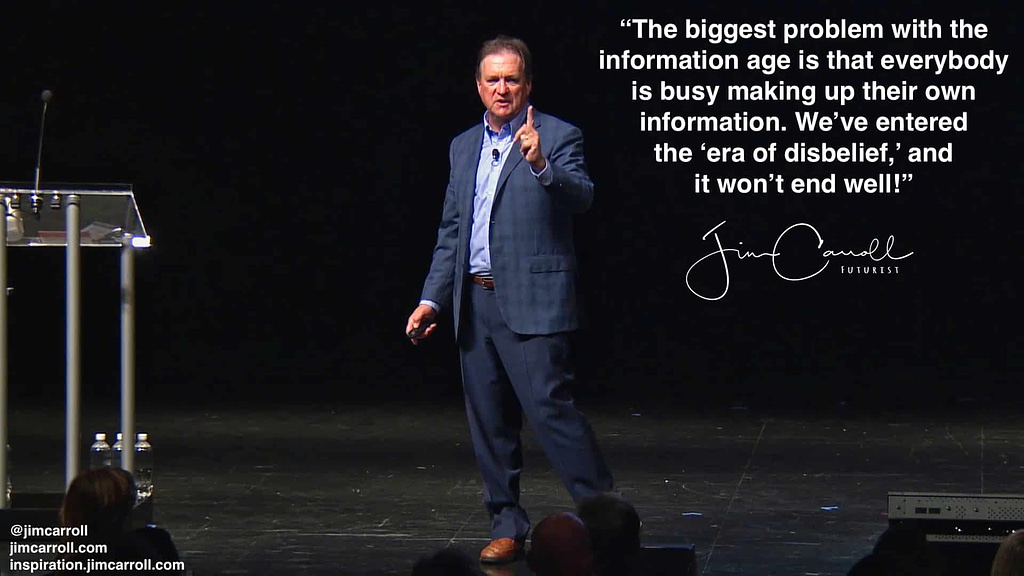 The damage being done is incalculable.

What happens to a society when no one believes anything & nothing is real?

I wrote ‘The Emerging Healthcare Reality Crisis” early in 2017.

Quite simply, since people now seem to choose what they want to believe, based upon information sources that have no resemblance to reality – we’ll see a trend in society in which people will die sooner, and life expectancy will be reversed.

Read the post, and dare to tell me that I’m wrong.

I can already see it occurring all around, and it is starting to pop up in the ongoing research I do into the world of healthcare as I prepare for a major medical conference later this week.

Bob Lefsetz covers the music industry in his brilliant blog, “The Lefsetz Letter.” Weeks back, he wrote the genesis for this quote, noting in a fantastic post about Brexit: “They call it the Information Age. What we didn’t expect was that everybody would make up their own information, to suit their own purposes. To the point where no one trusts information at all.”

That just about sums up our world.

People won’t believe the healthcare diagnosis they are given. They will disbelieve the GPS based evidence that they were the ones to cause a car crash. They won’t think that their lack of skills and education is the reason they didn’t get a job.

Or that their lack of commitment to a personal is the reason for their failure.

Seriously, what happens in a world in which no one believes anything,
and everyone becomes their own information-fantasy generator?

The world has lost its relationship to reality. This is a BIG trend.

What should you do? Hold on to your information values. Believe that science is real, gravity is a thing, education matters.

And that everyone else around is truly nuts.