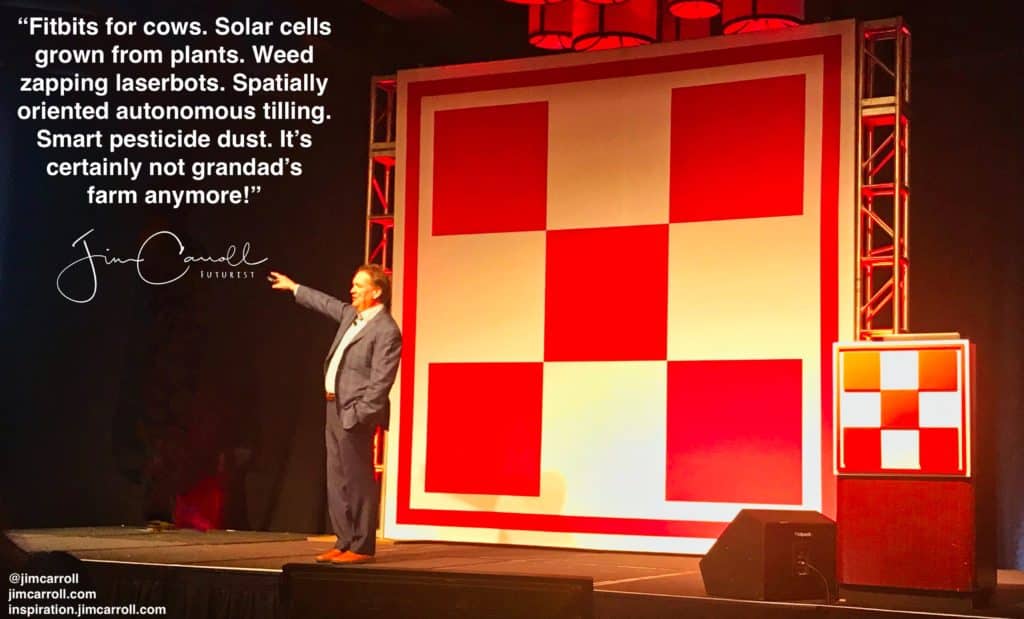 Today, I’ll be in Elizabethtown, Pennsylvania, doing a talk for the 75th anniversary of a major seed company. I’ll have farmers and distributors, producers and coops, agricultural companies and association representatives.

And I’m likely to freak some of them out with my talk, particularly as it relates to the speed of change occurring in the world of farming and agriculture. The photo in this quote is from a similar event, where I spoke to several hundred agricultural co-op dealers on behalf of Purina’s animal feed division.

What’s up? Fast change – and yet, many people continue to view farming from the sepia-toned photos of the 1940s and 1950s.

They don’t realize the technological and scientific advances or the massive opportunities for international growth. It’s a fascinating industry, with a lot of fast moving science and technology at its core, driven by massive demographic change as tech-savvy kids take over the family farm.

Growers that focus on innovation as a core value will find success; their innovation will focus on the triple-feature need for growth, efficiency and ingestion of new science. It will be by adopting new methodologies, products, partnerships and ideas that they will learn to thrive. That’s one of the messages that I’ll bring into the room.

How will people react? Some quite negatively – they prefer a world as it was, not as it will be. That attitude will cause them to wake up with continuing dismay each and every day as the future unfolds with blinding speed all around them.

Others? “Bring it on!” they’re thinking. The future is theirs, full of opportunity from innovation.

Today, on this Monday – which century do you choose to place yourself in? The last one? This one? Or the next one?