Daily Inspiration: “You are now surrounded by highly intelligent people who are making completely irrational decisions based upon absolutely idiotic information! What’s your plan?”

“You are now surrounded by highly intelligent people who are making completely irrational decisions based upon absolutely idiotic information! What’s your plan?” – Futurist Jim Carroll 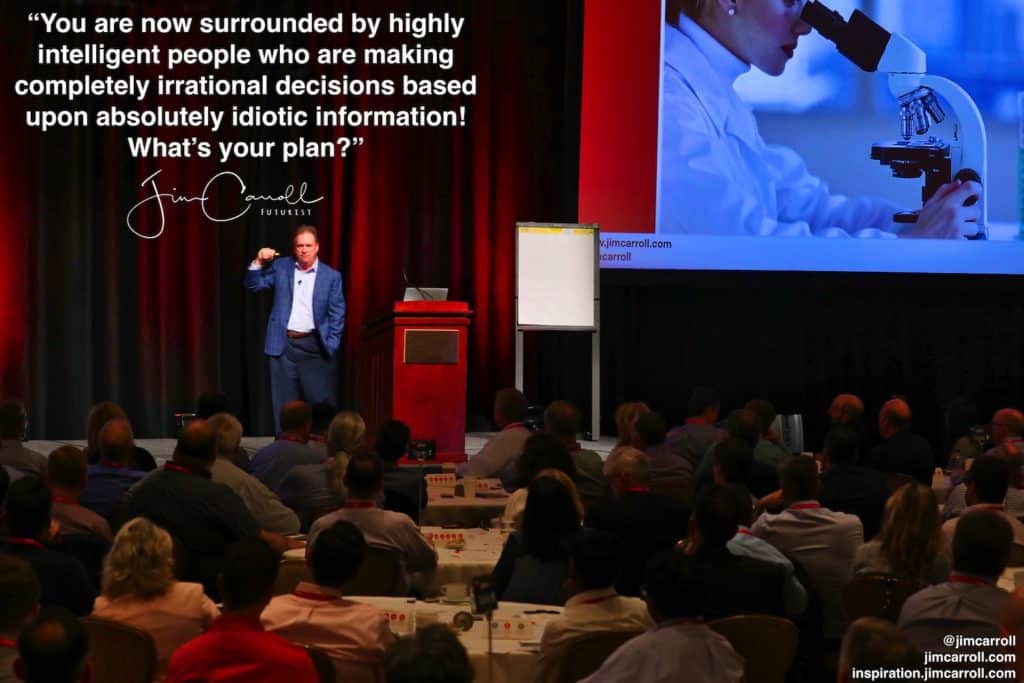 I must admit I am mesmerized by American farmers.

Indeed, over the last 25 years, I’ve spoken at a tremendous number of agricultural events. I’ve developed a reputation of being able to interpret the scientific, technological, & other trends which provide them so much opportunity going forward.

Smart people, they are! Except, in some areas.

Until they decided to cast their lot with a vague promise of ‘greatness.’

Now? Lots of American farmers are hurting; lots of farms are shutting down.

I’m trying to feel some sympathy for these folks, but I keep coming back to the issue: “Who did you vote for? And why did you vote for cutting yourself off at your knees?”

People are seeing the needles destruction that is occurring. The other day, I saw a tweet from @naretevduorp, refereeing yet another article documenting the damage being done to the American farm:

“I was raised on a farm, I know what it feels like when the crop in the field represents a loss & yet you still have to spend money to harvest it, or the loss is greater. That being said – Those who are facing this reality, who voted for Trump, got exactly what they voted for. (link: https://twitter.com/maggieNYT/status/1160955912653279232)

“Why would a whole bunch of smart people undertake activities that align themselves to the reality of the future, & then do something that is completely at odds with their ability to get there?”

The same thing is happening in manufacturing – a drumbeat of lost business, job losses, cutbacks.

It’s inevitable that we are going to have a recession & an economic downturn. Too much damage is being done. The destruction is only going to become worse.

It didn’t have to be this way.

People should define the future through their actions, not their emotions!