Home   >   Uncategorized   >   Daily Inspiration: “Seriously, will things really become ‘great again’ when the rest of the world is laughing at you?”

Daily Inspiration: “Seriously, will things really become ‘great again’ when the rest of the world is laughing at you?”

“Seriously, will things really become ‘great again’ when the rest of the world is laughing at you?” – Futurist Jim Carroll 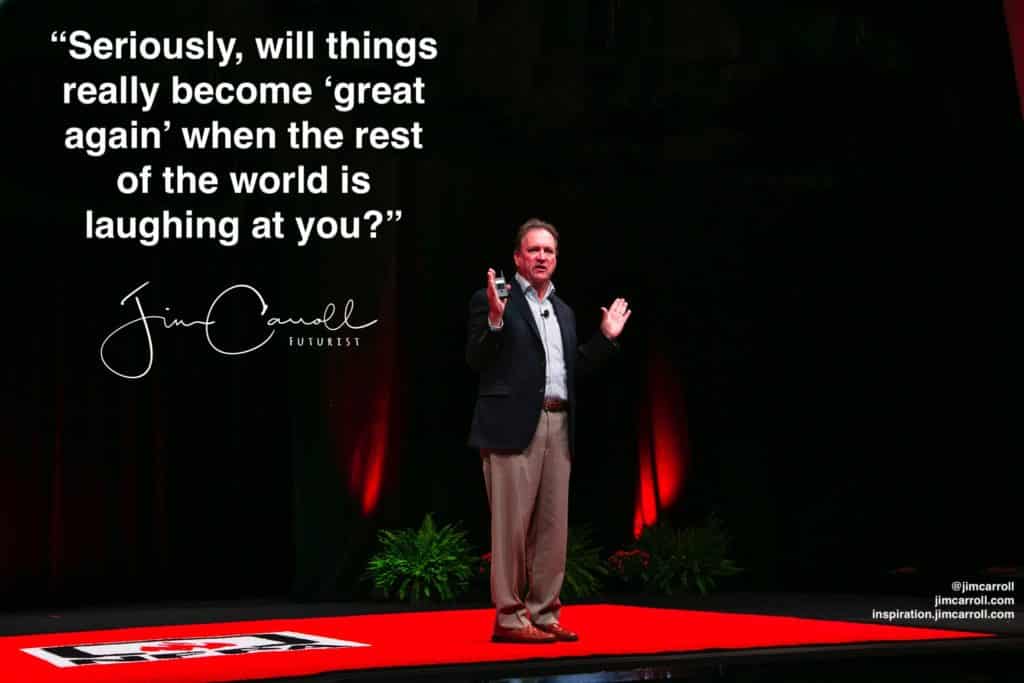 If you follow me, you’ll know that I’ll often talk about the “Innovation Killers” – the ideas and attitudes that can hold an organization back from achieving greatness.

One of the phrases that are used to kill innovation? Take a look at my list —> “That’s the dumbest thing I ever heard”

I’ve made the point that we should never discount dumb ideas because they can often be rocket fuel for great, creative, innovative thinking.

But the thing is – there are dumb ideas. And then, there are absolutely stupid ideas.

The reality show that is today’s world is really getting out of hand, don’t you think? It’s jumped the shark because now you really can’t know what harebrained idea is going to be launched next.

Douse an economy with 100-basis points of stimulus gasoline, removing any potential tools for an inevitable future downturn? Float a personal tax cut because your other actions are actively taking money out of people’s pockets? Become a global laughingstock because you cancel a visit over their absolute ridicule of an absolutely crazy idea?

The reality show is almost like we are in elementary school – we all watched the idiotic things that the classroom bully would do each and every day. We all *knew* that it wouldn’t end well and just waited patiently for the inevitable meltdown. We all whispered amongst ourselves as to how ridiculous the individual was; we all consoled ourselves with the belief that he or she would be kicked out of class.

When it comes to innovation, we’ve got to build a future that encourages crazy ideas; out of norm ideas; big, far-reaching ideas that seem to be in the land of the unattainable.

But we also need to recognize that sometimes ideas can go too far, and simply serve no other purpose than to an accelerant for laughter.

Dumb ideas that are, just, well, too dumb to be stupid.