Daily Inspiration: “If I tell you all at once, your head might explode!”

“If I tell you all at once, your head might explode!” – #Futurist Jim Carroll 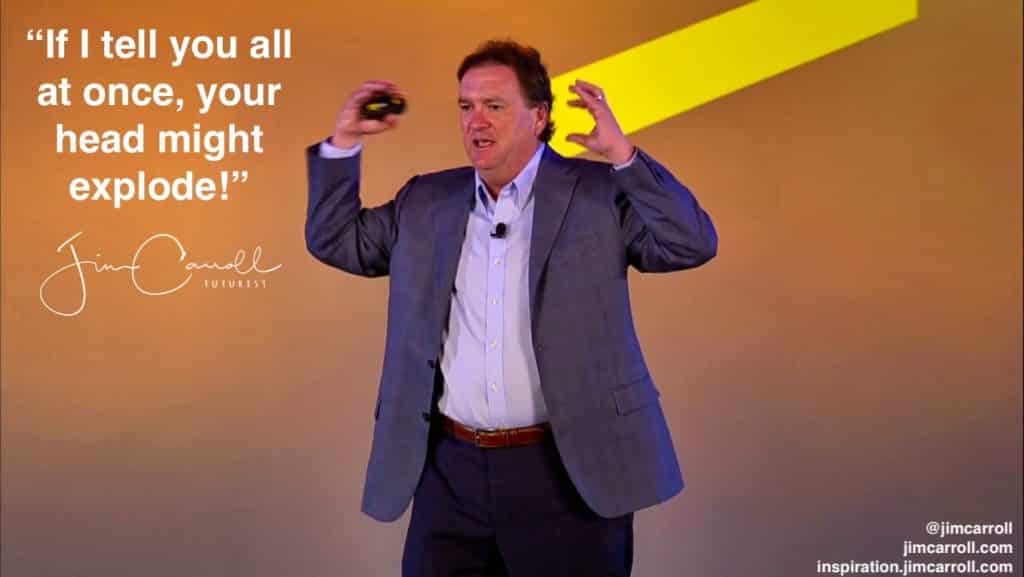 The scope of the future can be staggering, and some people in my audiences struggle with that fact. They can’t comprehend that we might see more change in the next 10 years than we have seen in the last 100.

Can you actually imagine how different your world might be just 10 years from now? You will probably think that it will look much like it does today, but with a few self-driving cars about.

Thinking on a 10 year scale can be challenging, so here’s an exercise – think about what your world would be like without an iPhone or Android device. Take the concept of mobile apps out of your life, and imagine your world around you today.

You wouldn’t have Uber. GPS navigation would probably be spotty. There wouldn’t be a lot of opportunity for you to track your fitness or health activities on a daily basis. The concept of placing a video call from anywhere on the planet to anyone else on the planet wouldn’t exist. You’d still be carrying around a digital camera.

That’s but one substantive, transformative invention – now think about others that have appeared in your life during the last 10 years.

Now try and cast your mind forward 10 years. What new inventions might have come about that could have a similar, staggering impact?

You don’t know where to start?

Then go and visit my ’19 Trends for 2019’ to begin to get a sense of some of the trends bubbling around today that might be similarly transformative in 10 years time.

That might be a good way to begin to think about your future without your head exploding as a result of the scope and magnitude of what is yet to come!