Home   >   Agility   >   Daily Inspiration: “Agility is the ability to be adaptable to acceleration!”

Daily Inspiration: “Agility is the ability to be adaptable to acceleration!”

“Agility is the ability to be adaptable to acceleration!” – Futurist  Jim Carroll 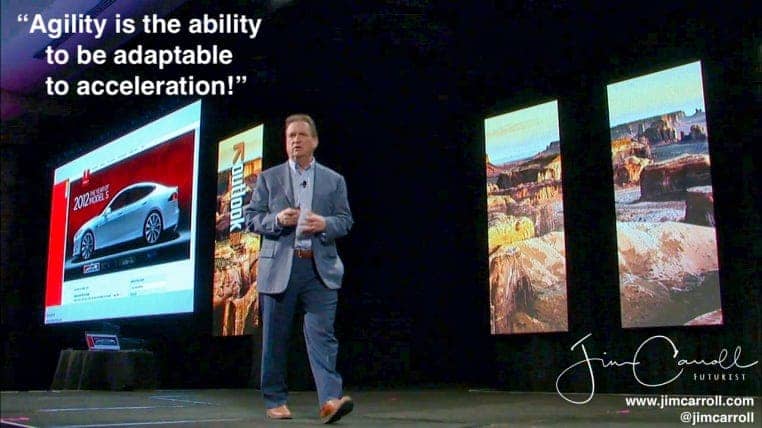 ‘’ This morning, I’m in Phoenix, about to do a keynote for the spring meeting of the National Mining Association. I won’t be talking about issues around coal – more on that later!
There is a phrase that I’m bringing into the room – “The future happens slowly, then, all at once!”, by Kevin Kelly, the Founder of Wired. It captures the essence of our times – there are any number of trends of significance that we know are going to change the future – but it is difficult to judge when they become real.

That’s the focus that I am bringing into my talk this morning. When it comes to the mining of raw materials, there is unprecedented opportunity with big industry shifts – the acceleration to electric vehicles, battery technology everywhere, the ability to do 3D printing in metal. So too with mining methodology – drones, autonomous trucks, ships and cranes, the Internet of Things (#Iot) layered throughout the mine for monitoring and safety. Not to forget digital mapping and location intelligence!

The challenge is to know when to implement any trend, idea, or technology. We know they will be real – we just don’t know when. And that’s the idea of agility — the ability to suddenly respond and adapt when any particular change ‘goes supernova!’ In the era of acceleration, anything can happen all at once after being around and ‘percolating’ for a while.

The use of the car in the photo is appropriate – it’s an electric Tesla. The emergence of electric is going to happen faster than people think – and for the mining and other industries that will be raw suppliers, the speed of the change might catch them off guard. Hence, it’s a great photo for the context of this quote. Fun thing – his particular photo is from another keynote, just last year at this time this very week, f for a major trucking conference, where I was speaking about the acceleration of trends with self driving cars!’’