Trend Keynote: There’s More to Disruption Than You Think There Is!

Disruption is real, it’s big, and it’s happening faster than you think. My job as a futurist has me doing an increasing number of CEO level events for Fortune 500 companies around the world, participating in leadership meetings which are focused on the massive transformations and disruption occurring in every single industry. Clients such as NASA, Disney, Godiva, Nikon, Mercedes Benz, Johnson & Johnson, and many more.

There is so much coming together all at once, and it accelerates everything. You might not understand the multiple trends that are coming together, so let me take you there. 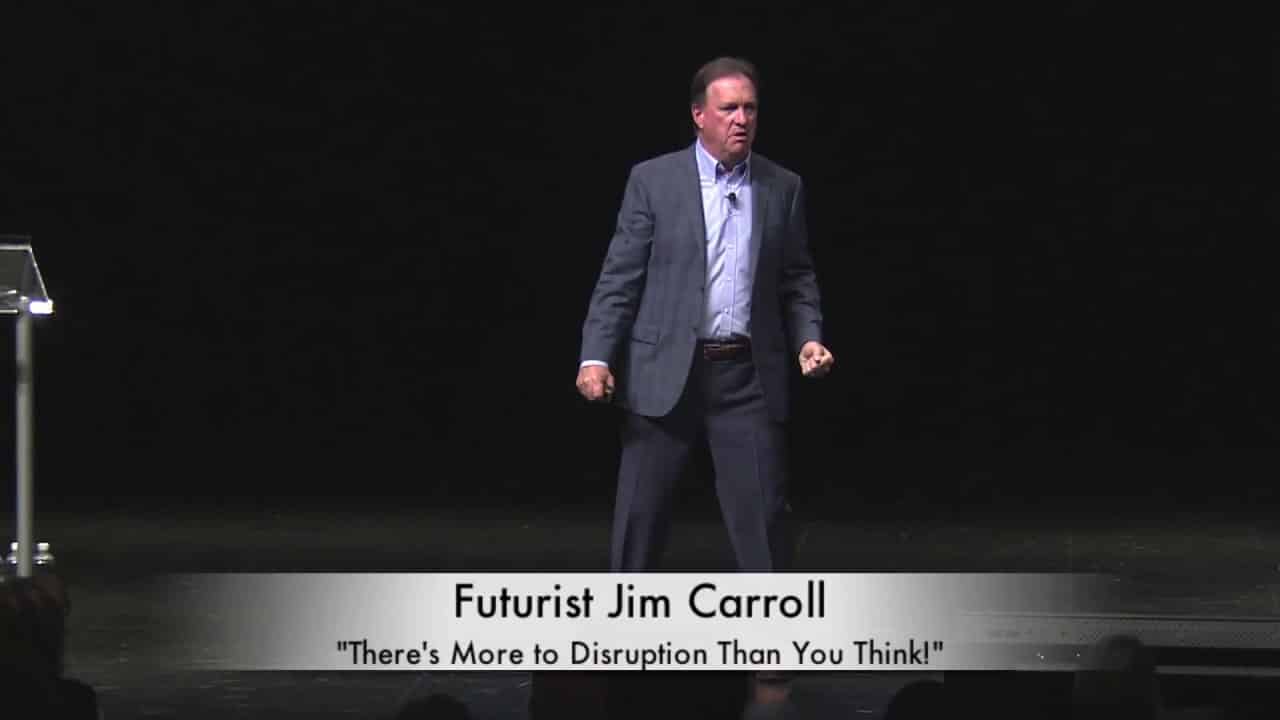 Here’s what you need to think about today, as the pace of change picks up:

1. Multiple trends merge. There’s a lot going on! Individually, any trend is disruptive. Combine them together, and it’s transformative. 3D printing, exponentiating bandwidth, hyper-connectivity, the Internet of Things, artificial intelligence, robotics, neural networks, deep analytics, autonomous vehicles, Bitcoin and blockchain, self-learning systems. All of these trends and more are merging together,  leading to a massively new, connected, intelligent machine that will transform, change, challenge and disrupt every industry.

2 Every company becomes a software company. From healthcare to insurance, home appliances to automotive, manufacturing to packaging, retail to sports & fitness, energy to agriculture: every industry is seeing massive change as it becomes enabled, challenged and transformed by technology and connectivity. From precision agriculture to self-driving cars, smart clothing to connected microwaves, remote medical monitoring devices to active packaging  — every company in every industry is becoming a computer company, with software and technology at its heart and soul.

3. Moore’s law innovation speed defines every industry. It’s the rule that defines that the processing power of a computer chip constantly increases while the cost collapses at an exponential rate — and that speed of change is coming to drive the speed of innovation in every single industry as we all become tech companies. Companies are having to innovate and transform at a pace never seen before.

[read more=”Read more” less=”Read less”]
4. Science exponentiates. The volume of medical knowledge is doubling every six years, and the number is going down. The cost for genomic sequencing is following an exponential downward curve. Battery technology innovation is moving forward at a furious pace with new methodologies, ideas and more coming to market. One single new chemical substance allowed Apple to miniaturize the hard drive for the original iPod, which led to the birth of a billion dollar industry. Science is the heart of the future, and the future is happening faster!

5. Edge thinking dominates. Crowdfunding networks allow for a world in which small upstarts don’t need to follow long-established ‘rules’ for changing the future. To move faster, they source ideas and inspiration through crowd-thinking, raise their funds through new forms of financing, and prototype products through 3D printing and other fast-to-market methodologies. Global R&D has moved from massive labs to globally dispersed idea factories.

6. Small beats big. Legacy is death: agility and speed are the new metrics for success. Big organizations are often encumbered by history and are suffering from the disease of  organizational sclerosis. New, aggressive upstarts can move faster, with the result that they can make decisions that provide for big disruption and challenge.

7. Ideas accelerate. With the Internet, we have essentially built a big, global idea machine, and fast innovators know how to mine its riches. In every field, the pace of innovation and discovery is speeding up to an unprecedented level. What use to seem like science fiction just a few years ago is todays’ reality.

8. Revenue reinvents – regularly. With fast ideas comes faster innovation : 60% of Apple’s revenue comes from products that didn’t exist 4 years ago. That’s a blistering pace of innovation. Expect that to become the norm in most industries as the future accelerates, product lifecycles collapse, and disruption disrupts.

9. Attention spans collapse. All of this fast change is difficult to comprehend, and so we have become scattershot! We now scan some 12 feet of shelf space per second – a goldfish has a longer attention span than a human. We need to have constant, relentless innovation in terms of marketing, branding and consumer outreach, not to mention what we need to do to engage our workforce!

10. New interaction dominates. Mobile is everything; we live on our devices. It influences everything we do, all that we decide, and much of how we interact with each other. The next phase will involve smart, connected packaging talking to our devices, and a new era of hyper-connectivity that will make todays’ early attempts at mobile marketing seem like child’s play.

11. Business models realign. The Internet of Things (#IoT) doesn’t just result in cool new products – it redefines entire revenue models. The era of predictive diagnostics allows for a future in which appliance or automotive manufacturers can now design products that will tell you when they are about to break down. This changes the essence of the product from a physical device that is sold to the sale of a service with uptime guarantee revenue models.

12. Distributed technologies redefine. When everything connects, power disperses. Micro-grids will change the utility industry as backyard wind, solar and other renewables result in little, local neighbourhood micro-grids. Cars that talk to each other and to sensors in the highway result in a new concept of transportation. Everywhere you look, distributed connected technologies are redefining concepts and turning industries upside down.

13. Money disappears. Sometimes distributed technology have a bigger impact than you think – as is the case with blockchain, which essentially redefines money. Central banks are out, and distributed ledgers are in. Ethereum goes one step further than Bitcoin, by embedding the historical contract concept of an offer and acceptance into the very essence of money. It’s intelligent money, and we still don’t know how quickly this will change everything.

14. Flexibility emerges. Given all this change, companies are focused on agility in order to get ahead. At a manufacturing plant in Graz, Austria, Magna has built the ultimate in flexible assembly lines, with the ability to build different cars from different companies on one assembly line. Elsewhere, companies are busy moving the software concept of agile development into the boardroom, adopting it as a key leadership trait. The ability to change fast is now the oxygen that fuels success.

15. Gamers Game. 25,000 people showed up to watch 4 gamers play a video game tournament in the Los Angeles Staples Centre – and 43 million tuned in worldwide via Twitch, the hottest new social platform on the planet. They’re coming into the workplace, and live in a world that involves a constant need to ‘level-up.’ Nothing will ever be the same as new forms of motivation and reward come to drive everything – and in this world, Xbox-type rooms are the new office!

16. Virtualization arrives. AR and VR are here, and the era of virtual welding is not too far off – and any other skill can be undertaken anywhere, at any time. An example is the forthcoming disruption of trucking, which will happen when a driver in India can navigate a truck through the streets of New York through a virtual headset! Outsourcing of skills is one thing – outsourcing of physical work is a whole new level altogether!

17. Infrastructure risk exponentiates. One word – Equifax. We are busy building a big, elaborate machine in the form of massive connectivity and accelerated information, but don’t quite know how to secure it. The TV show South Park had a character do a shoutout to in-home Amazon Echo and Google Home devices — and exposed a new security risk that no one ever thought about. Expect things to get better much worse before it gets better!

18. Insight influences. Big data and analytics might be overused buzzwords, but not to everyone. We live in a new world of Amazonian insight, where those who have the tools and knowledge to understand what is is really going on are the ones to get ahead. Depth of insight drives disruption – actuaries are moving from a world of looking back to one fo looking forward based on real time medical device connectivity. Car insurance is no longer based on past driving performance, but real time behaviour based on GPS. Even the world of health care is moving from a a world in which we fix you after you are sick – to knowing what you will be sick with based upon your genetic profile, and acting accordingly.

19. Expectations accelerate. If your Web site sucks, so do you. In our new world, people want the simplicity of a Google query via a touch screen device. Gone are the days of complex online forms — in are applications that are instantly aware of who you are and what you want. The bar of expectations is increasing at a furious pace, and if you can’t keep up, you can’t compete!

20. Industries virtualize. No one company can do everything that needs to be done in an era of fast change. In retail, all kinds of new partners are emerging to support last mile shipping, drop shipping capability, drone delivery and more. In finance, there are more types fo Fintech startups than there are world currencies, helping banks to navigate the complex new world of cryptocurrencies and more.

21. Knowledge accelerates. Skills access is the new gold. Did you notice Ford paid $1 billion to get access to some experts in self-driving car technology? Enough said. Those who can access the skills in trend #1 above win. We’re in a global war for niche talent, and that pretty much defines a critical strategy for the future. If it is all about skills, then success involves a strategy in which grabbing them fast is the only path forward.

22. Experience is the new capital. Innovation is the new oxygen. There’s no time to learn, to study, to plan. It’s time to figure out what you don’t know, and do the things that are necessary to begin to know about it. Experiential capital is the new capital for the 21st century.

23. Generations transform. 1 out of 2 people on the planet are under the age of 25. They’re globally wired, entrepreneurial, collaborative, change oriented — and they are now now driving rapid business model change, and industry transformation, as they move into executive positions

24. Big, bold thinking predominates. There are people who grab all of these trends and do “big things.” We are seeing the emergence of an entire world of big dreamers and doers, individuals who dare to challenge the orthodox, and abandon routines. The concept of the ‘moonshot’ is no longer restricted to those with deep pockets — but is oxygen for those with big ideas.

25. Action is the best reaction. Put it all together, and what odes it mean? If you don’t disrupt, you will be disrupted. It’s your ability to quickly act, react and do that will allow for future success. There’s not a lot of time for debate, studying; inertia is abhorred. Simply DO. That should be you.

Remember that song by the Who? “I hope I die before I get old!”

You better change before you can’t.

Do something about it. 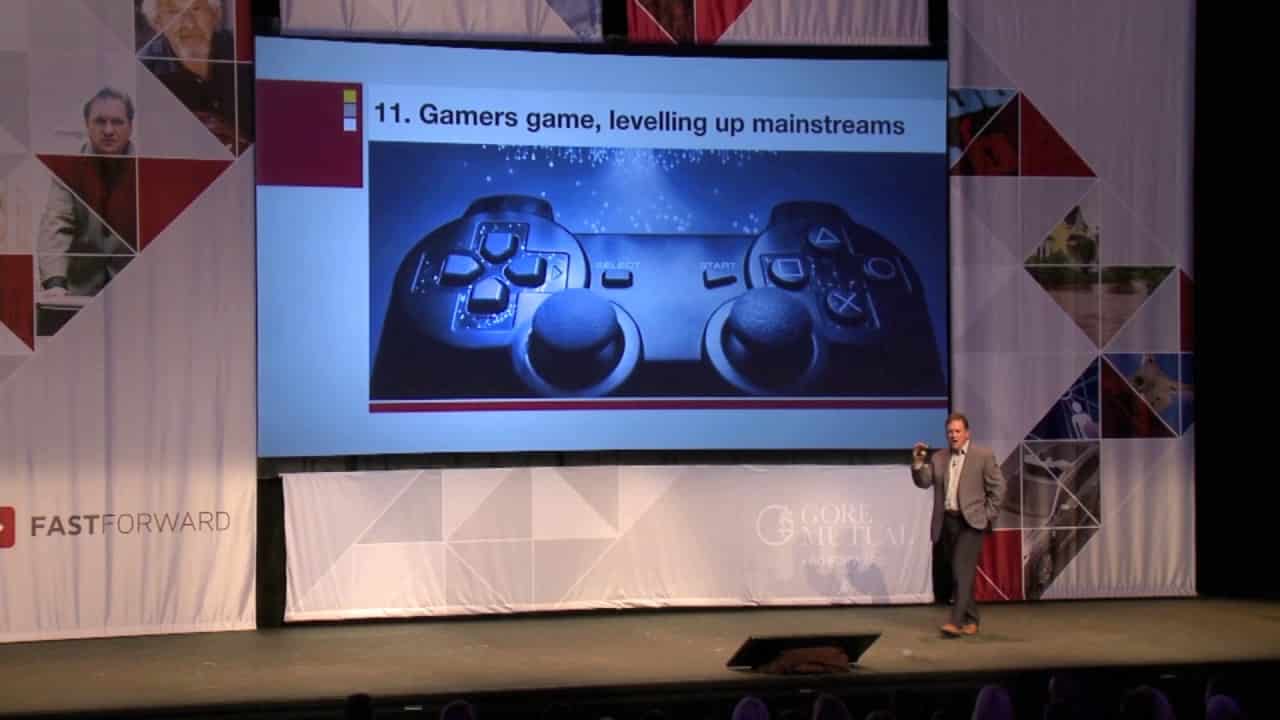