It’s a pretty wild concept: that technology today — including that in trucking — is being eclipsed and outdated almost as soon as it can be brought to market. But if you want to know what’s around the next corner for trucking, that’s where you need to start, says futurist Jim Carroll. 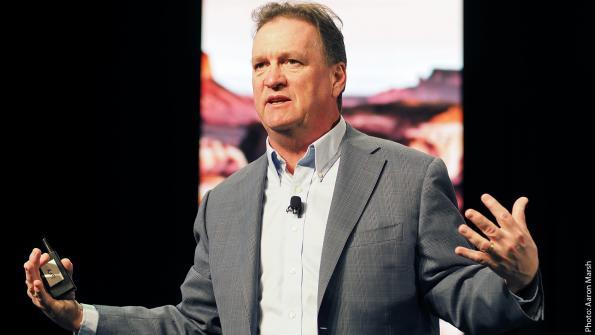 According to this future trends analyst and foreseer of sorts, if you want to get out in front of the next big change in trucking, keep in mind that when it comes to the future, you may have no idea what you should really be thinking about.

To set the stage and “bring you into my world — and that is a world of extremely fast-paced change,” Carroll referenced research on the future of careers in the U.S. that suggests about 65% of children now in preschool will have a job in a career that does not yet exist.

“Think about that: if you have a daughter, son, granddaughter, niece, nephew or whatever who’s in kindergarten or grade one, roughly seven out of 10 of them are going to work in a job or career that does not even yet exist,” Carroll told listeners. He spoke at the recent Omnitracs Outlook user conference in Phoenix.

“That’s a career that didn’t exist 10 or 15 years ago,” he continued. “Now, cast your mind into the world of trucking 10 years from now and think about the careers and jobs that might exist.”

Here’s another guiding example. If you take “any type of degree today based on science” at a college or university, Carroll contended, “things are evolving so quickly that it’s estimated that half of what we learn in the very first year of a degree program will be obsolete or revised by the time we graduate three years later.”

Those who are fast

The point is, technology changes are coming from seemingly everywhere, and change — including in trucks and their growing embedded technology like Internet connectivity or advanced safety products — is accelerating.

And that is so much the case, noted Carroll, that many kinds of technology are out-of-date almost as soon as they hit the market and you can buy them. Think about smartphones, which often see multiple models of a given phone issued in a single year.

“We live in a time of absolute, instant obsolescence.”
—Futurist Jim Carroll

That drive for the latest model has now even filtered into social standing. “The way your friends judge you today is very much based on the technology you carry around,” Carroll observed. “So in other words, if you go to a party and take out a flip phone, people will be kind of looking at you like, ‘What a loser — he’s got something from the olden days.'”

Carroll gave another example of digital cameras — actually something of a moot point, he suggested, since “this is back in the old days five years ago when people actually bought cameras and weren’t all just using their phones” — where products have about 3-6 months after they’re brought to market before they’re obsolete.

“We live in a time of absolute, instant obsolescence,” he argued, attributing that phrase to global media magnate Rupert Murdoch. Some years ago, Murdoch had pointed out that there is such change happening and at such speed, “that increasingly, the future belongs to those who are fast,” Carroll said.

Polling the audience, he asked listeners what they thought the trucking industry — its methods, its equipment, its technology — would look like in a decade. Most everyone, 86% of those who texted in, voted that they think the industry will be “barely recognizeable, or fully and completely disrupted.”

That’s a clear expectation of considerable change in trucking. “So let’s try another question: if we are in the midst of so much change,” Carroll said, “are we prepared for it?”

And on that note, he added that being prepared for the potentially disruptive/ disrupted future of trucking is to realize that change has been happening faster, particularly in these latter years, than people expected.

To illustrate how, Carroll referenced a time he’d spoken before a roomful of astronauts and astrophysicists at NASA about the future of space. Carroll’s choice of what to present on? The Jetsons. That animated TV show came out in 1962 and was meant to depict life 100 years in the future in 2062.

Except, if you watch some of those old episodes, “George [Jetson] is using Skype. He’s getting his news off the Internet,” contended Carroll. “Elroy has a drone. You can watch one episode where he’s sitting in the living room and using a controller just like we have with our drones.

Along with the Jetsons, here’s another example of the sci-fi, fictional future arriving sooner than expected: a group of scientists has prototyped this device, Carroll noted as he held it up to his head, which essentially works like the Star Trek medical tricorder set in the 23rd century.

“You can watch another episode where they’ve got an Apple Watch,” he continued. “George communicates with his boss via Facetime. Obviously, they’ve got self-driving cars, autonomous vehicles, all over the place, albeit they fly.”

“My point is this: we believed that this future would arrive in 2062, and all of a sudden, it is here much sooner than we thought,” he told the audience. “Could that be the case with our future overall?”

In terms of envisioning the future, perhaps think a little offbeat but observe the trends converging. Here’s an example. “Think about trends, and think about what has happened with drone technology,” noted Carroll. “I think a trend which is going to lead us to the world of self-driving, flying cars is we’re going to learn how to scale up our drones and sit a human in them.”

What kinds of things could happen? Maybe a new type of truck or vehicle will be developed. Autonomous technology could be accelerated and advanced. New distribution models could emerge. Or maybe something else could — something entirely different that turns the trucking you know now into the trucking you knew way back when.

“We’ll simply do a biometric thumbprint to complete a transaction,” Carroll painted his future trucking portrait. The only thing, though, is that those technologies, and testing of them, is happening now.

There’s also this: “Part of the changes you see happening [in trucking] is we are witnessing very significant changes in what retailers and manufacturers are doing with their supply chains,” he added. Trucks can now become something more like mobile distribution hubs, for example.

Because of the rise of online shopping and fulfillment, stores will become more like showrooms, and “we’re witnessing the end of inventory,” Carroll contended. Consumers will browse these showrooms and purchase a product, he suggested, and then a streamlined distribution system will deliver that item to the purchaser’s home — hint: trucking would have to be involved here — perhaps even within an hour.

“You are becoming warehouses on wheels, and everybody has this in their sights in terms of big, transformative thinking in your industry,” he argued. “And what is really also happening is that every single industry out there is speeding up.”