Insurance & Innovation: The Challenge of Change

Last week, I was the opening keynote speaker for a small insurance industry group — and had senior executives of quite a few major property & casualty and life insurance companies in the room.

As always, I undertook an extensive amount of detailed research on the latest status of innovation within the industry. In addition, I looked back on my research and interview notes for previous keynotes for CEOs and other executives for the largest insurance companies in the world.

(Last December, I was the opening keynote for the annual Insurance Executive Conference in New York City; in the room was the CEO for Transamerica Life, among others; this is typical of many talks I’ve done within the industry over the course of 20 years)

Let’s face it: the trends are real. The industry will be disrupted by tech companies. Existing brokerage and distribution networks will be obliterated as more people buy insurance direct. Predictive analytics will shift the industry away from actuarial based historical assessment to real-time coverage. Policy niches, micro-insurance and just-in-time insurance will drive an increasing number of revenue models. The Internet of Things (iOt) and healthcare connectivity will provide for massive market and business model disruption. I could go on for hours!

To gauge the current thinking within the industry as to “how to deal with what comes next,” my session included some hands-on, live interactive text-message polling.

Right out of the bat, I asked the participants if they felt ready for the massive disruption now underway in the insurance sector.

And the fact is, they are not: 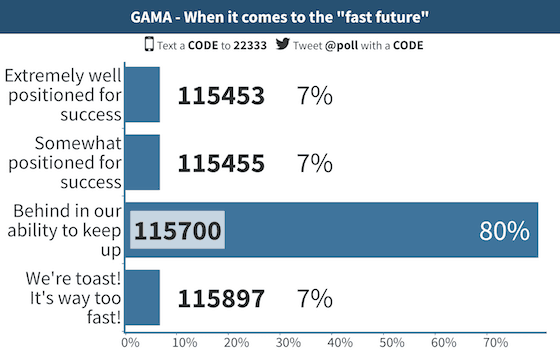 Having said that, they know that they are in the midst of some pretty significant change — the majority indicated that they believe that the insurance industry will not look anything in 10 years like it looks today. 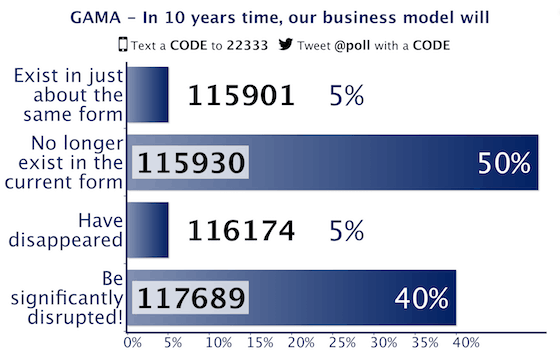 The reaction in the room parallels that of a recent Accenture study that I referenced in my keynote:

A similar observation was found in a recent PWC study on the insurance industry:

Here’s the current problem: there is tremendous potential for complacency to seep into the industry, particularly as Google has pulled back from its’ Google Compare initiative. (This service let people use a Google tool to do comparison shopping for insurance policies from major carriers; the CEO of Google Compare also spoke at the New York event last December).

Is the complacency warranted? Not in my view — I think most tech companies, when disrupting an industry and suffer an initial setback, come back in a bigger and more significant way. It’s most likely that when Google, Amazon, Apple and other tech companies  come back in to disrupt insurance, they won’t be working with major carriers to do it!

Does the insurance industry have the innovation culture necessary to deal with the potential for what comes next? My next poll gave me a pretty stark response — the industry continues to be bound up in some pretty significant organizational sclerosis. 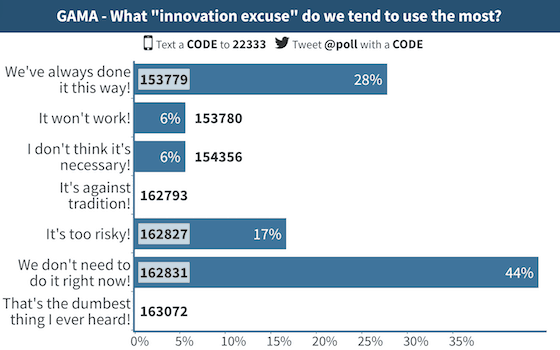 Is there a way out of this mess? Can the industry fix the clear strategic mismatch which exists?

In my keynote,  I suggested that disruption in such a significant issue that it really needs to be dealt with at the level of the Board; strategy needs to be kicked up a notch; clear responses and actions are warranted.

Quite clearly, specific responsibility needs to be put in place to implement a  disruption-strategy. Back to the Accenture report:

Industry insight also clearly shows that insurance companies must “partner-up” to deal with the fact they simply don’t have the technology expertise to compete with Google, Amazon and others.

Are many insurance companies following the path to partner up? Sadly, no:

I’ve been providing strategic level guidance to senior executives in the global insurance industry for over 20 years.

The issues, challenges and opportunities are stark. They’re real. They’re not going away.

Will most companies survive? Maybe not. Stay tuned!