Category under: 2020 and Beyond, Blog, Global economy, Trends
DAILY
MOTIVATIONAL
INSIGHT
FROM
JIM

I grew up during the Cold War. 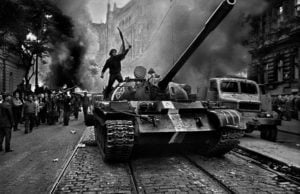 I remember the era of atomic weapons as a threat above our heads; I remember my Mom preparing for the end of the world with the situation in Cuba in 1963; she seemed very busy getting lots of extra water and food down into the cellar. I was barely 4 years old. I remember being very scared.
It is a memory that is seared in my mind.
I have another memory of the cold war. My dad was a Chemical Engineer, working with a company known then as Emery Industries, in London, Ontario, Canada. I have a vivid memory, sometime around 1969, when he spoke of having hired a young, new engineer; the fellow had asked for ‘asylum’ in Canada; was succesful, and was now going to be working with my dad.
My dad explained to me, after I had pestered him, that the young fellow had run from the plane in Gander, Newfoundland — seeking freedom. The plane was going from Prague to Cuba; Gander was a fuel stop. He had decided to risk his life, by running, after the horror that was the Prague Spring.
The entire concept was new to me. The idea that someone ran from a plane to be free boiled my mind.
When Václav Havel helped to immerse the world in freedom in 1989, my mind was boiled again.
I’m travelling tomorrow to Prague with my wife. I am so inspired by the idea of what the Prague Spring meant. I think I am lucky to have been touched by it in a small way, through a fellow who ran from a plane almost 40 years ago, in order to gain freedom.
I am inspired, simply, by Prague.