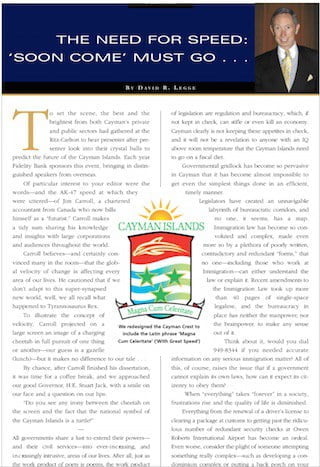 At this time back in 2007, I was the opening keynote speaker for the Cayman Business Forum.

I had about 700 people in the room; international financiers, wealth managers, bankers. At the timel, Cayman was one of the world’s leading offshore banking centers.

I write about this now, because I return there tomorrow with my family, for a personal vacation. No keynotes! But having visited Cayman, I always vowed to go back, and am thrilled to be doing so.
When I was preparing for my keynote, I had the delightful opportunity of speaking for about 1/2 hr the prior evening with the Governor of the Cayman, H.E. Stuart Jack, at his home, where he hosted a small party with the local elite.

Part of my discussion with the Governor revolved around my belief that with forthcoming growth in Asia, and other major trends involving high-end skills, Cayman was certainly in the position of losing its lustre and standing in the global money race.

My keynote was open, honest, aggressive, and blunt.

Later press coverage showed that I certainly caught some attention — and that my message resonated with the Governor.

To set the scene, the best and the brightest from both Cayman’s private and public sectors had gathered at the Ritz-Carlton to hear presenter after presenter look into their crystal balls to predict the future of the Cayman Islands. Each year Fidelity Bank sponsors this event, bringing in distinguished speakers from overseas.

Of particular interest to your editor were the words—and the AK-47 speed at which they were uttered—of Jim Carroll, a chartered accountant from Canada who now bills himself as a “futurist.” Carroll makes a tidy sum sharing his knowledge and insights with large corporations and audiences throughout the world.

Carroll believes—and certainly convinced many in the room — that the global velocity of change is affecting every area of our lives. He cautioned that if we don’t adapt to this super-synapsed new world, well, we all recall what happened to Tyrannosaurus Rex.

To illustrate the concept of velocity, Carroll projected on a large screen an image of a charging
cheetah in full pursuit of one thing or another—our guess is a gazelle (lunch) — but it makes no difference to our tale . . .

By chance, after Carroll finished his dissertation, it was time for a coffee break, and we approached our good Governor, H.E. Stuart Jack, with a smile on our face and a question on our lips: “Do you see any irony between the cheetah on the screen and the fact that the national symbol of the Cayman Islands is a turtle?”

Today, Singapore, Dubai and London have transitioned to take over the role as global economic powerhouses in terms of wealth, money and banking. And the Cayman still finds itself playing a powerful role as the world’s sixth largest international banking center — but lagging behind the growth rates of other financial centersas most global wealth concentrates in Asia and the Mid-East.

What’s the moral of the story? I’m not sure — but sometimes, I hope that in some small way, my thoughts on stage, and the opportunity to speak at such an event, can help to shape future outcomes! Maybe turtles can transform into cheetah’s!