Trend: “…..they recognise me and run a customised commercial on an in-store TV….”

Some months back, the folks at Retail NewsAgent in the UK sent me a series of questions asking about the future of retail. They were busy preparing for their 125th anniversary issue, and were interviewing a number of fellow futurists for insight into the trends that might shape and impact the sector in the future. 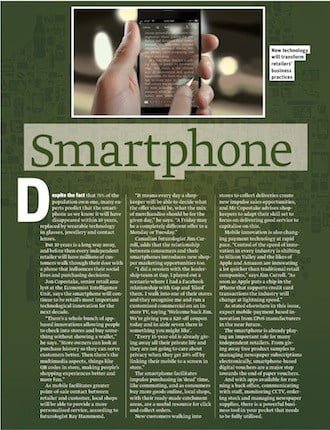 They’ve run a pretty lengthy article which I’ll post later this week, but here’s a short little article that they also ran in which two of us talk about the impact of the smartphone on the overall shopping experience.

The entire PDF is available on the right, but here are two quick extracts:

Canadian futurologist Jim Carroll, adds that the relationship between consumers and their smartphones introduces new shopper marketing opportunities too.

“I did a session with the leadership team at Gap. I played out a scenario where I had a Facebook relationship with Gap and ‘liked’ them. I walk into one of their stores and they recognise me and run a customised commercial on an in-store TV, saying ‘Welcome back Jim. We’re giving you a $20-off coupon today and in aisle seven there is something you might like’.

“Every 15-year-old is already giving away all their private life and they are not going to care about privacy when they get 20% off by linking their mobile to a screen in store.”

“Control of the speed of innovation in every industry is shifting to Silicon Valley and the likes of Apple and Amazon are innovating a lot quicker than traditional retail companies,” says Jim Carroll. “As soon as Apple puts a chip in the iPhone that supports credit card transactions the industry will change at lightning speed.”

Over the years, I’ve done a tremendous number of presentations into the retail sector — check here for a glimpse! On the page, I use one of my favourite observations about the world of retail in a world of fast paced change: “The average consumer scans some 12 feet of shelf space per second. Mobile interactions in the retail space are about to become common. You’ve got but multi-seconds to grab their attention.

Obviously, if everyone is carrying around a smartphone, then that becomes a primary window in which to try to grab their attention!