Think big, think bold, think fast — and ignore those who dare to laugh!

Today, of course, the Hyperloop is all over the news.

And of course, there is some derision, laughter, and hoots of silliness all over the Web.

The future doesn’t happen without science fiction. And science fiction has already conceived of the Hyperloop, as seen in these images of an article from the 1930’s on an ‘endless belt subway’ to expedite traffic.

Read my post, “A Rocket Will Never Reach the Moon,” about my recent keynote for NASA at the Goddard Space Center — which is how I sourced the images below. All kinds of people told Robert Goddard that his idea of a moon rocket was absolute lunacy. Just as some might tell Elon Musk today that his idea is just too far out there. Even the New York Times, who later apologized after Apollo 11 landed on the moon.

Then read my post, “Think Big.” That’s what folks like Elon Musk do. And that’s how the future gets invented. By people who think, dream and dare big. 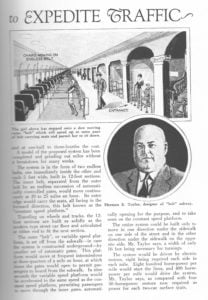 (Click either image for a full size of the scan I did in the home office this morning).