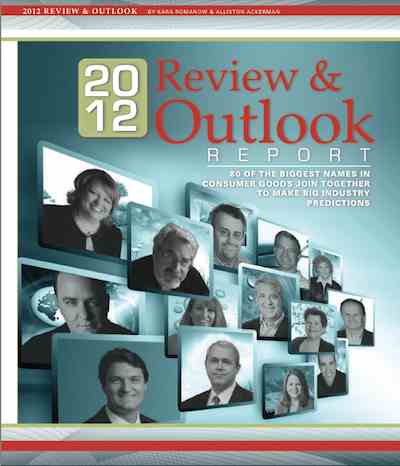 I’m honoured to be one of those 80 contributors.

This year, they were focused on the major trends which would impact the consumer good space in 2012 and years to come. Here’s how I responded:

There’s a tremendous amount going on in the CG space, particularly with mobile, social and location. Packaging is about to become intelligent; the relationship that consumers have with products is becoming more interactive; the retail space is going to change in a huge a way as our cell phones become credit cards.

Put that into perspective, and I believe that the biggest issue that people within the industry need to think about is the speed of change that is occurring. If you think about the context of these trends, what is clearly happening is that CG companies are no longer setting the pace of innovation; it’s being driven at the speed of companies in Silicon valley.

Can they keep up with the blistering rate of innovation that drives high-tech companies? Can they respond fast enough to take advantage of opportunities or at the same time, ward off threats? A key phrase that I’ve been using for years is that “the future belongs to those who are fast.” I think for 2012, this is going to be a defining success factor for every single CG company.”

I think my message is resonating ; a few weeks ago, these folks confirmed me to headline another of their  major conferences in New York City in October 2012.

The future belongs to those who are fast!