What Pat Boone’s App Says About the Future of Branding!

Here’s an article that I wrote for the spring issue of Marketline, for the BCAMA. Some good food for thought on the future of branding, and how all this social networking might really evolve.

Key point: “The concept of branding is being re-energized. People care again” 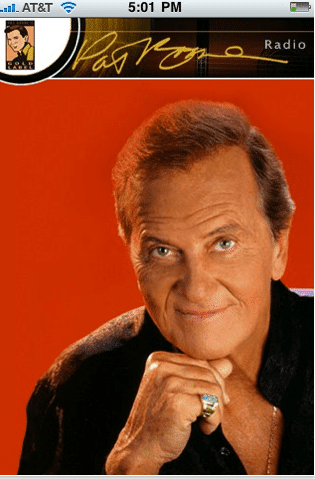 Pat Boone Has an App
by Jim Carroll, Marketline, Spring 2010

Does that blow your mind? It should. After all, for some people, Pat Boone could be the most uncool guy around, and yet he has an App with a pretty good rating in the Apple App Store. I think that’s pretty cool.

If it doesn’t blow your mind because you don’t know who he is, then here’s the deal: he’s a singer who sold some 50 million albums during the 50s and 60s. Think Justin Bieber if he was around in 1956.

I learned about Pat Boone’s App when I set out to get my own. Given the nature of my business, I’m a brand, and I’m a big believer that we are rapidly entering the era of the personal brand App. And in fact, the same folks who developed Pat’s App pulled mine together and had it available in the App store within just eight weeks.

What does this have to do with the future of marketing? Probably everything and anything, in that we are in the very early stages of what is likely to be a very significant transformation in the energy that people have towards the concept of a brand.

Think about that statement in the context of the current impact of social networking on brands and marketing.

Certainly, everyone knows that carefully orchestrated Twitter, Facebook and YouTube-centric marketing campaigns can provide a substantial uplift in sales and that, to a large degree, successful brands are focused on building relationships by having conversations with their customers. It’s all too obvious to everyone that if a brand doesn’t respect the fascinating power possessed by the new collective consciousness, things can go to hell in a handbasket in a hurry. And we all know that, increasingly, a brand is no longer what you say it is it’s what ‘they’ say it is.

Yet, these are early days. Where will we be 10 years out? How will the art of marketing have changed? What will a brand be in 10 years’ time? Will we even find it necessary to market a brand? Or will brands become such a part of our lives that we won’t even think it necessary to market them, because each of us will essentially own those brands? How do you market a product to someone who already owns the brand for that product?

Certainly there has been a tsunami of change in the marketing and creative world over the last few years with the explosion of social networking. But do we know where this change is going to take us? I’m not certain we do know. When the Internet first appeared on the scene, who could have imagined Twitter, or YouTube or cyber-battles between China and a company that didn’t exist less than a decade ago?

Much can happen in a two-year time span. Much more can happen in 10 years. The difficulty is in figuring out how to steer to wherever we might be in a decade. These are the early days and the pace of change is still accelerating. Brands are learning to adapt to fascinating new realities, and marketing skills are transitioning at lightning speed.

Customers are toying with their vast new powers, learning to use them in new and fascinating and sometimes scary and dangerous ways. Brands can go from hero to zero in a matter of moments. Marketing campaigns that one day seemed edgy and leading-edge can suddenly fall off a cliff, looking dull and out of date as a new brand comes along to displace them. And it all occurs at blinding speed.

Maybe in a decade some brands will have transitioned further into our lives through even more connectivity than we can currently imagine. Perhaps one day the packaging for a medication that I will be using will “talk” via a subterranean Twitter-like stream to a sensor embedded in my mobile device, updating my medical profile and adjusting my dosage based on up-to-the-second medical tests. When a brand becomes a part of my being, does that mean that the new brand relationship of today looks ancient?

I don’t think anyone has figured everything out yet with social media. There are certainly a lot of people talking about it, and I spend a fair amount speaking to the trend myself. But I think we are in the midst of something unique, special and awe-inspiring. I am convinced that in 10 years’ time, we will look back and think, “wow, that was an amazing time to take part in something big”.

What is that “something big”? Perhaps a period of time in which everyone customers and brand owners alike are becoming re-energized about the concept of a brand, as a brand truly become part of one’s existence.

Yes, Pat Boone has an App. He’s proud of his brand he put out good work, even if it is niche-oriented. And yes, maybe his market is declining. But here he is, an icon of the birth of the boomer era, and he’s got enough passion and enthusiasm for his brand to reach out to his brand participants using these fascinating new and powerful tools.

Pat Boone has had his passion for his brand restored. And maybe that is the most important thing that is happening right now. The concept of branding is being re-energized. People care again. We’re out of the era of robots building TV commercials that didn’t resonate, and brand images that didn’t create a sense of awe, and brand images that were simply stuck because of creative failure.

Perhaps that’s the real magic everyone is acquiring a new enthusiasm to do something with brands. If they own a brand, they can be inspired to do something great with it. If they are a customer of a brand, they can be inspired to help to shape the future of the brand more to their own liking through the collective consciousness that is social networking.

The energy and creativity around us is staggering. Continue to jump in, explore, try, do, fail and retry and remember that there is lots yet to learn, since these are early days.